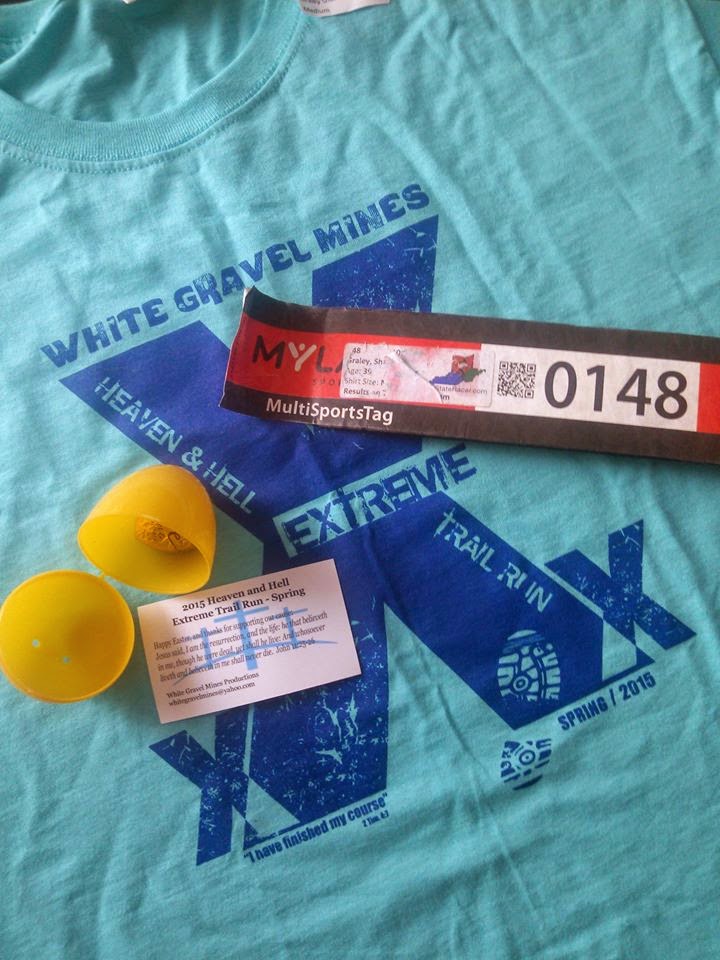 A few weeks ago, this facebook post popped up regarding an "extreme" trail run a few hours away.  And since this year I decided to focus more on mud runs instead of 5ks, I decided it may be just what I was looking for to start the year off right.  After the Dirty Girl run, I've started to research where the money goes towards these events and only want to take part in ones that I know the money will be used to help others.  It's just a personal choice.
The $40 entry fee goes toward funding of the Cavern of Choices which promotes a strong anti-drug message and emphasizing good life decision making.  Also, a portion of the fee is shared with associated local ministries such as Mylees Missions and the McGinnis House of Portsmouth to feed needy children.  Since this was Easter weekend (April 4th), I thought it would be a perfect run to do.
White Gravel Mines is located in Minford, Ohio. 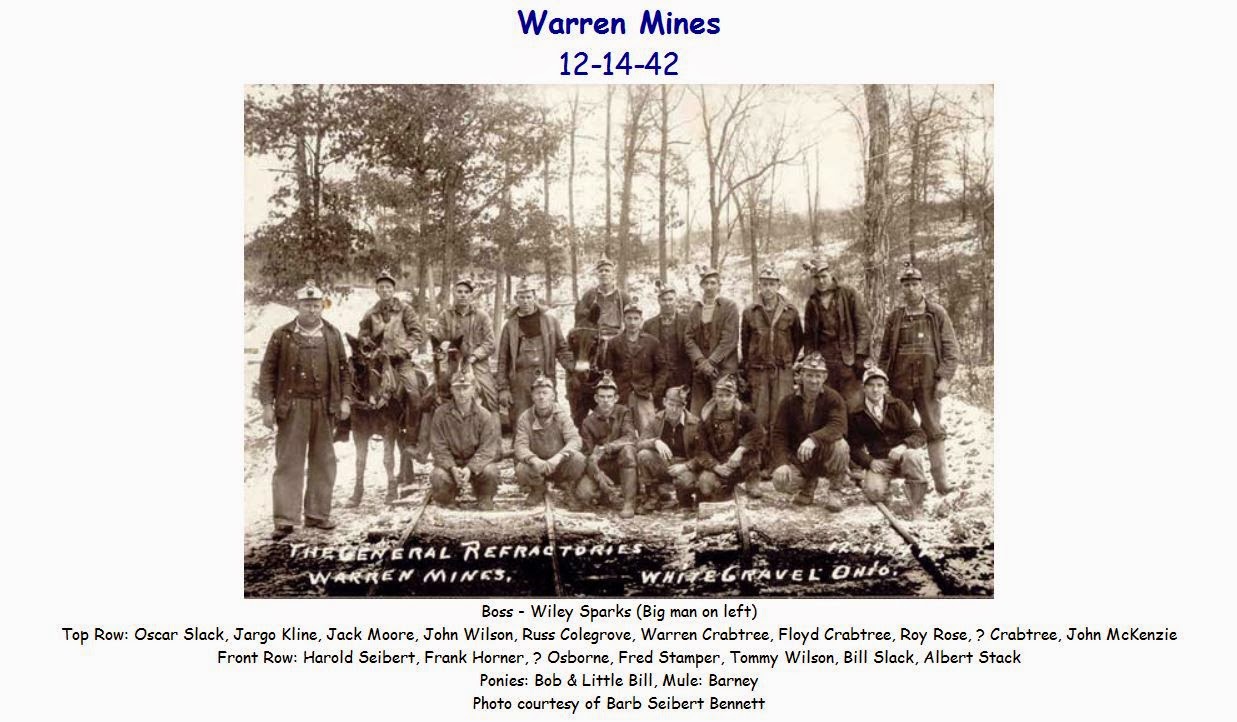 Gear:
From my research, I knew that there would be lots of mud and creeks which means cold and wet.  Good socks and shoes was my first priority.  Mines are dark so a headlamp was a most.
Course:
This 5k is modeled after runs like Warrior Dash and Tough Mudder but mostly all natural obstacles instead of the man made ones used in other runs.  One of the best features was that a significant portion of the race actually is ran inside the mine itself and is the only underground race of its kind int he tri-state area.  All pictures below was taken from the White Gravel Mines Facebook page.  The photographer was not listed and I blacked out the faces for this blog.  I'm also not sure what order the obstacles are in but will do my best to get it right.
This course is set up as a loop with the start and finish line at the same spot.  Right off the bat you must cross a stream and start getting wet.  I thought the water would be freezing but it really wasn't that bad.  It does kind of make you start off slow as you must watch your feet land on rocks. 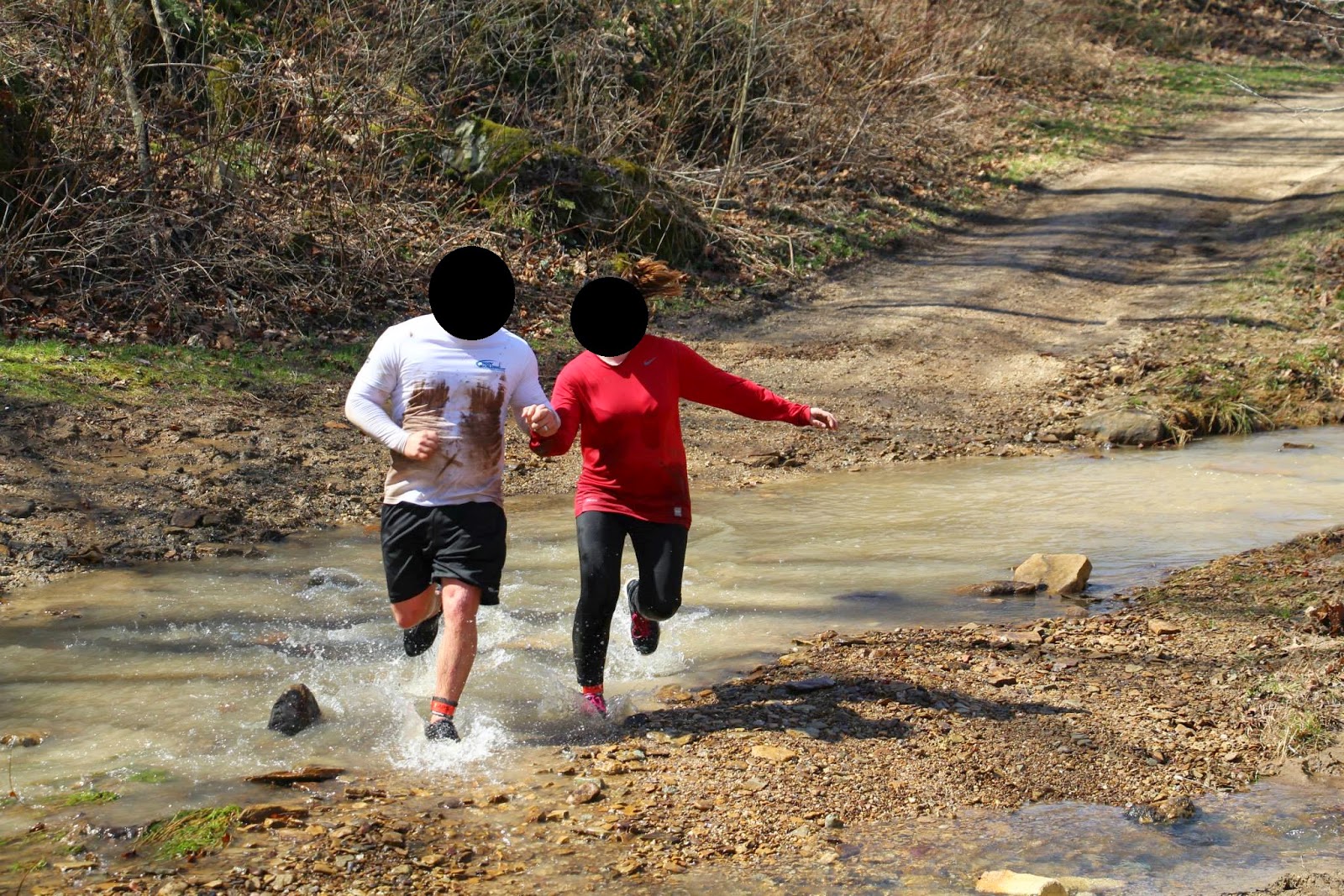 But after the crossing is a nice open lane to build up speed.  Until you hit another creek :-) 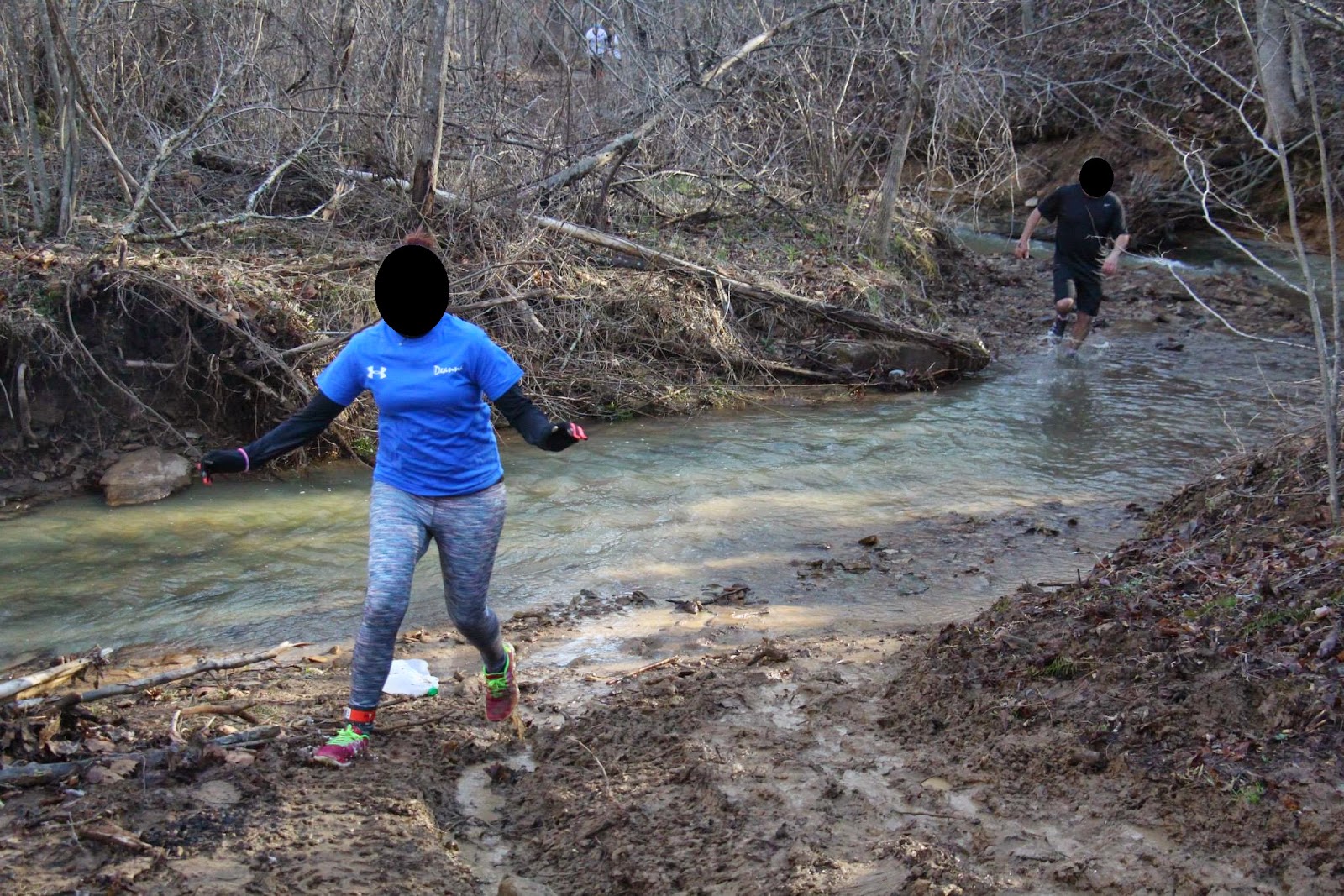 After this crossing is the mountain of mud to climb.  It was pretty steep and the mud made it hard to climb but it got the heart pumping. 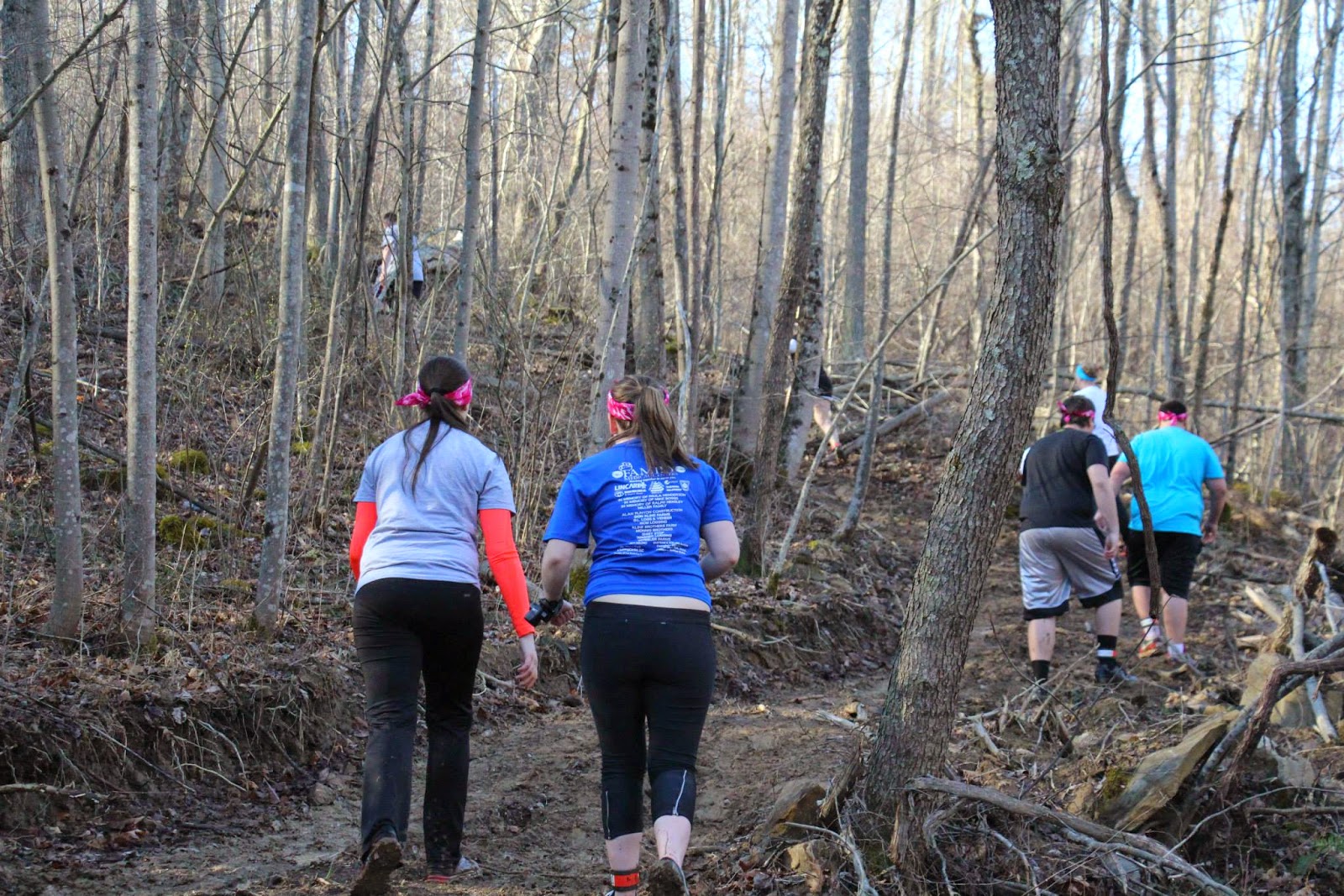 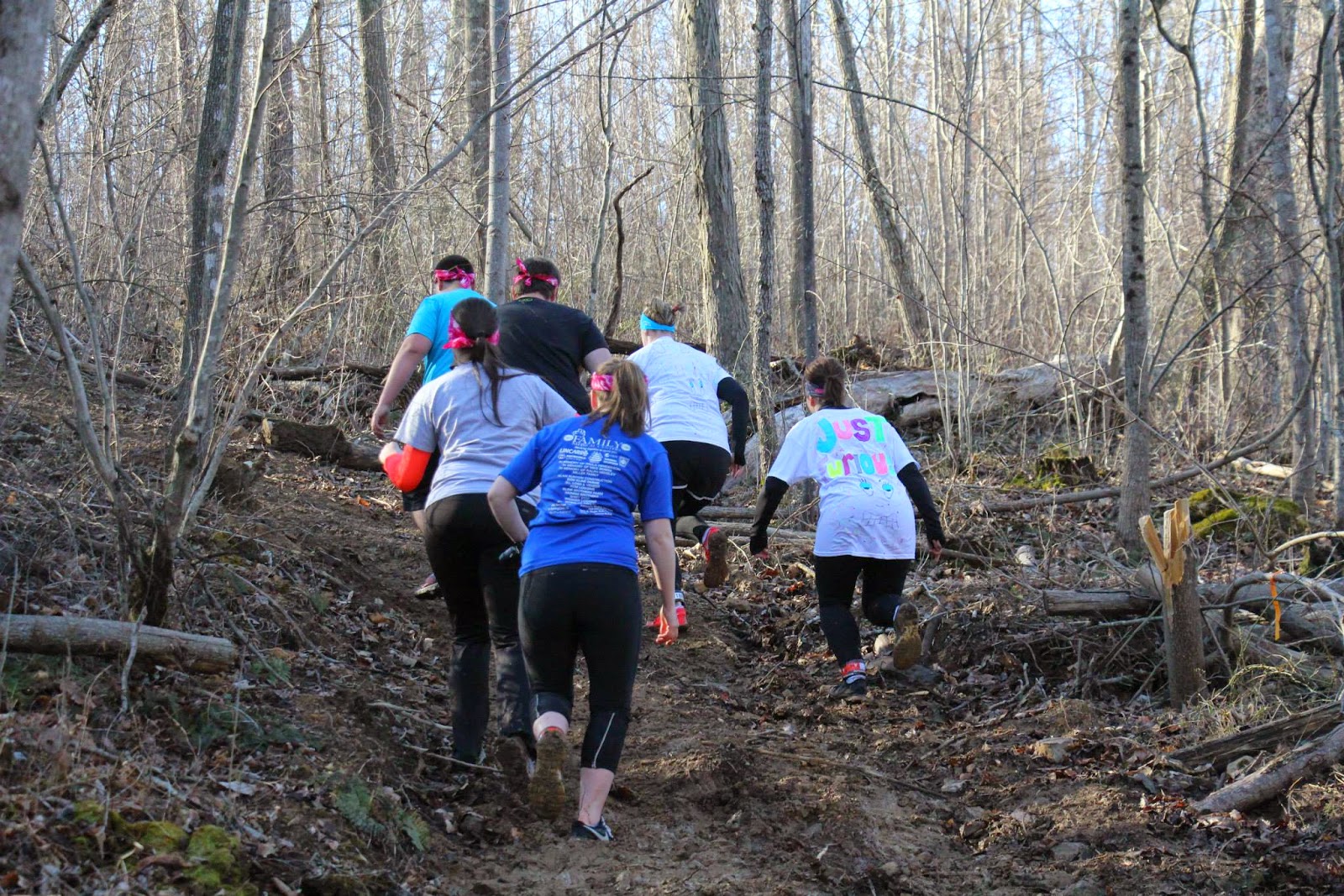 At the top was a few winding trails up and down and around until this crawling, uphill, under brush, came into view.  I wish there was a picture of the front because it was a cross laying on its side.  You will get to see it in another picture below at a different obstacle. ﻿ 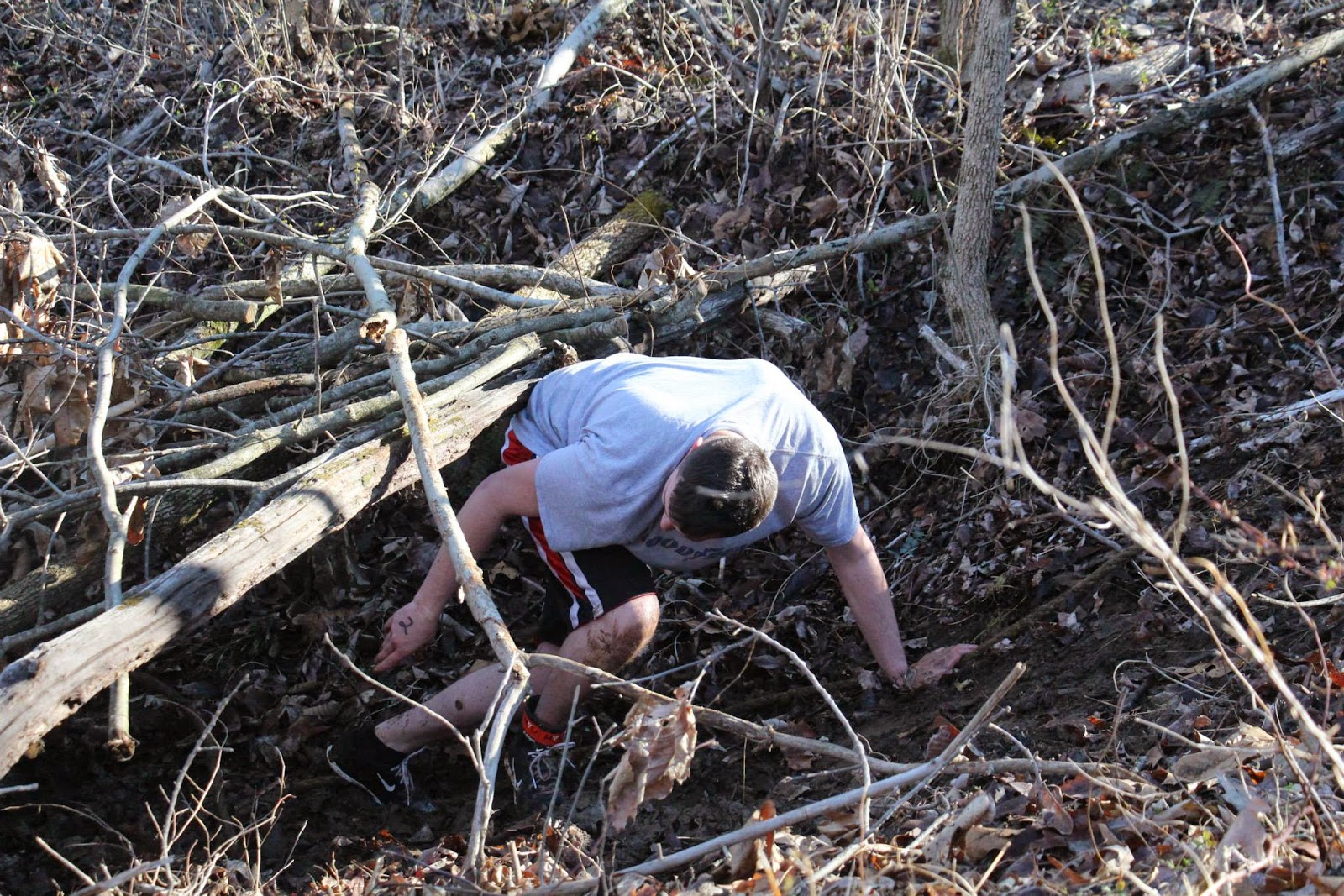 After this was more winding trails up and down and all around.  This obstacle was a up and under climb.  At the entrance was another cross on its side which you had to crawl under to start.  The picture makes it look on even ground but don't be fooled...it was another hill. ﻿ 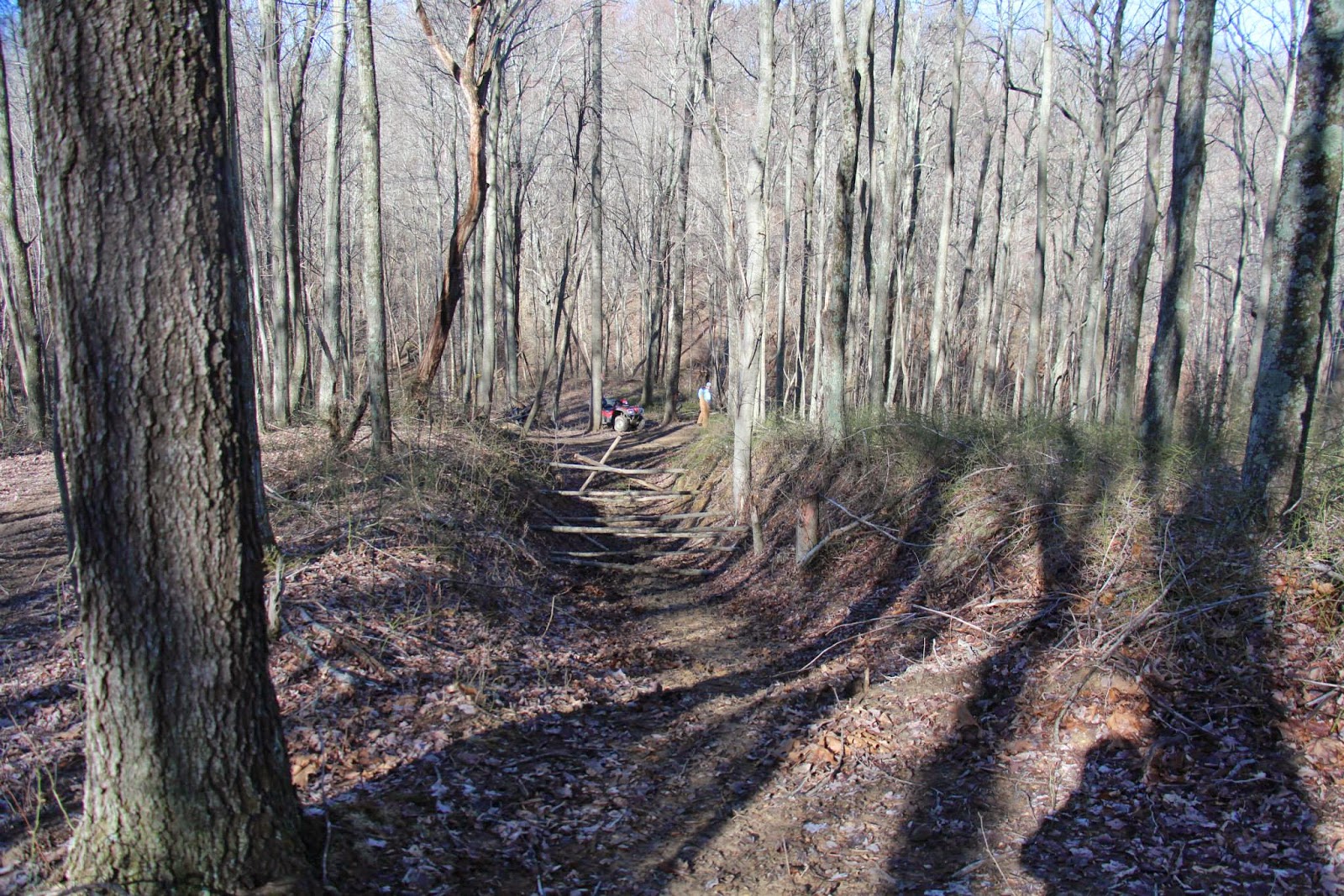 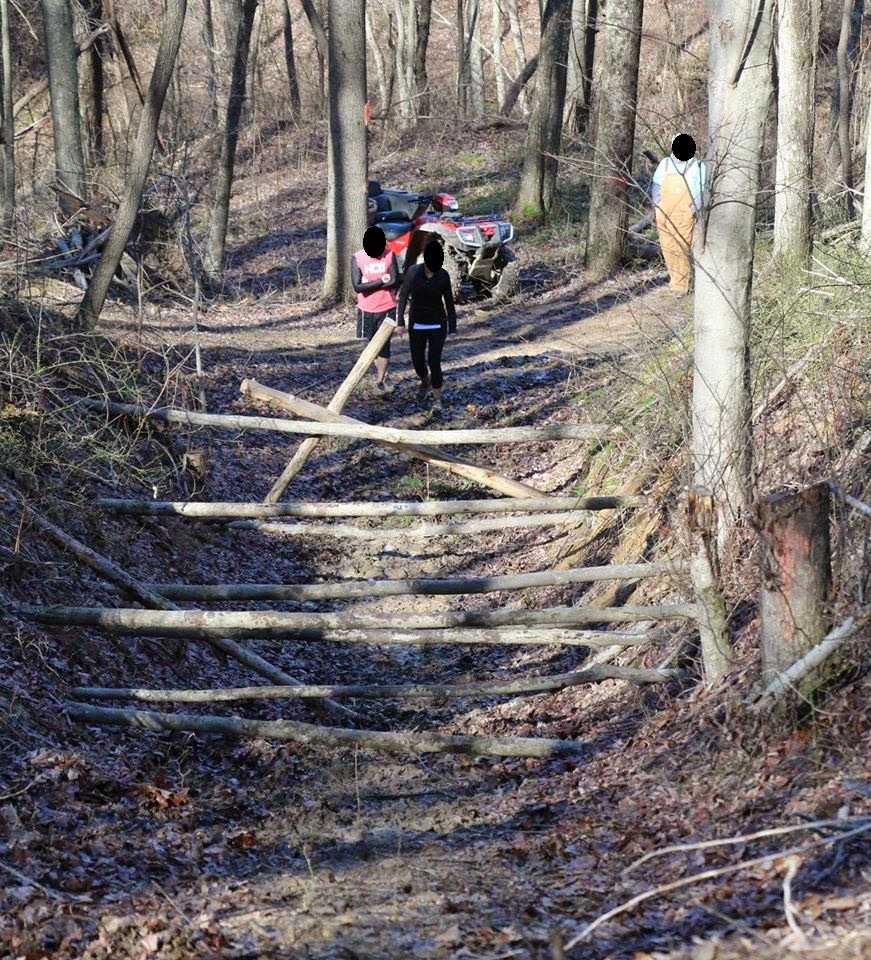 After this, you guessed it, more winding trails up and down and all around and then the tube crawl jumps out at you.  This is me, getting my crawl on! 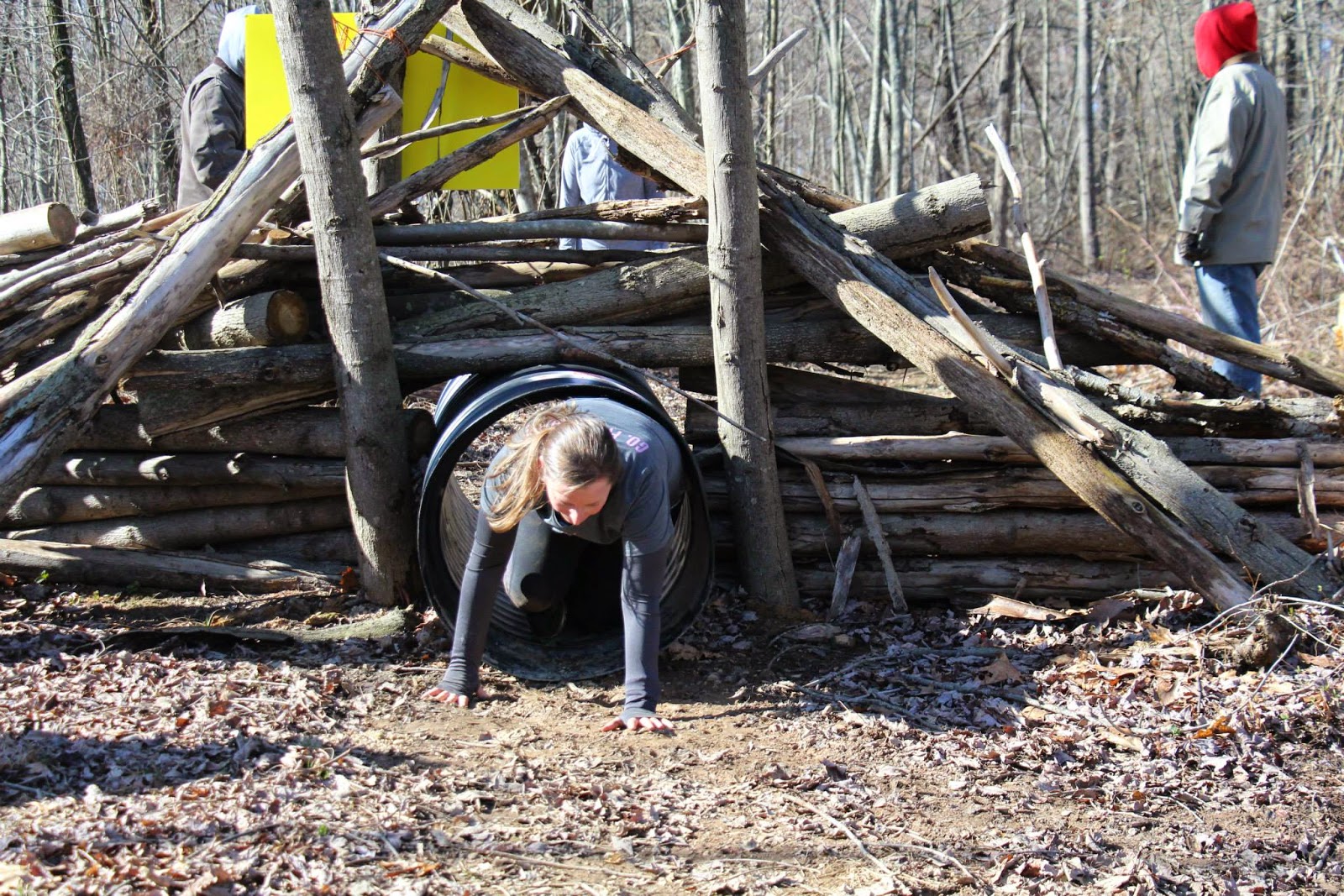 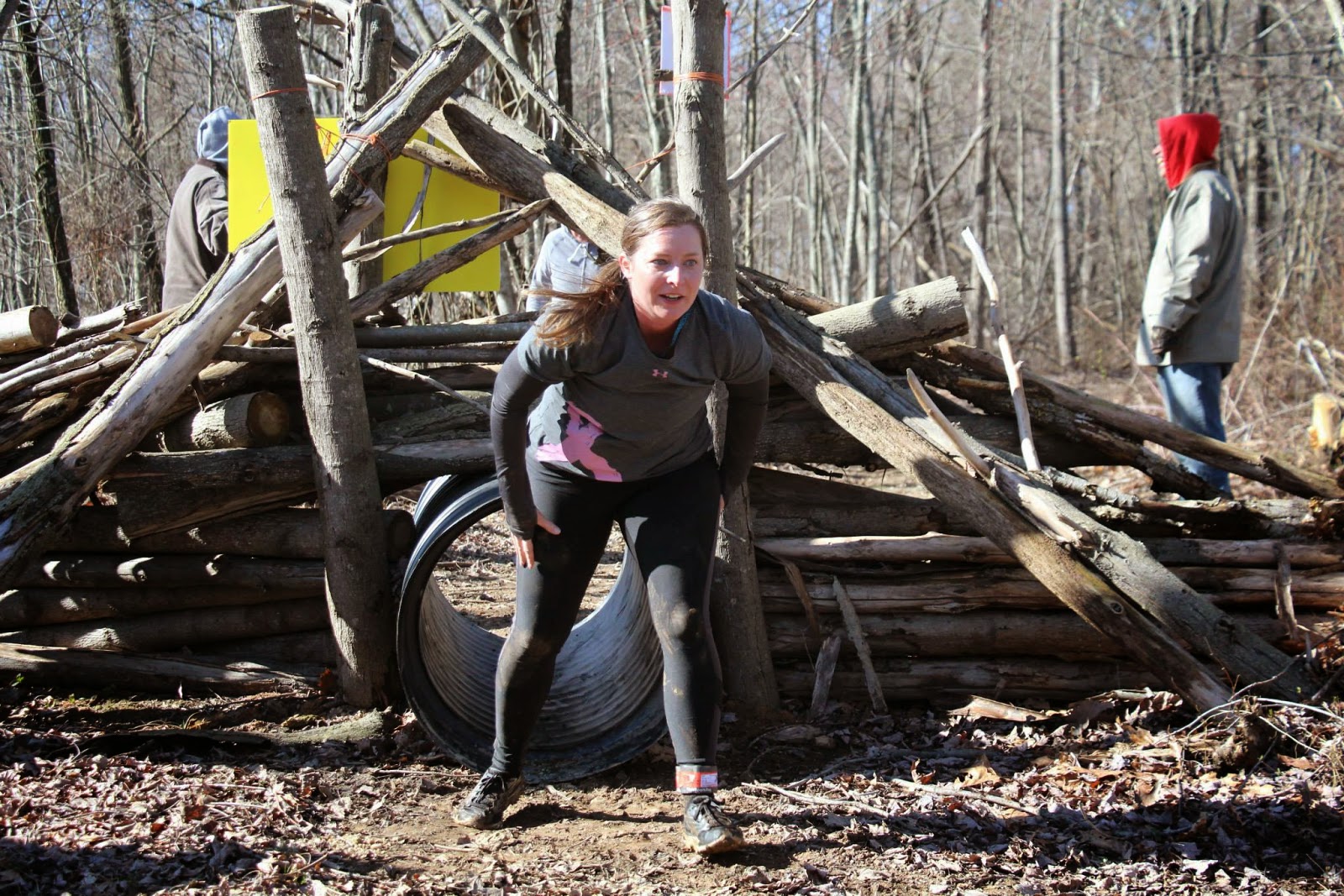 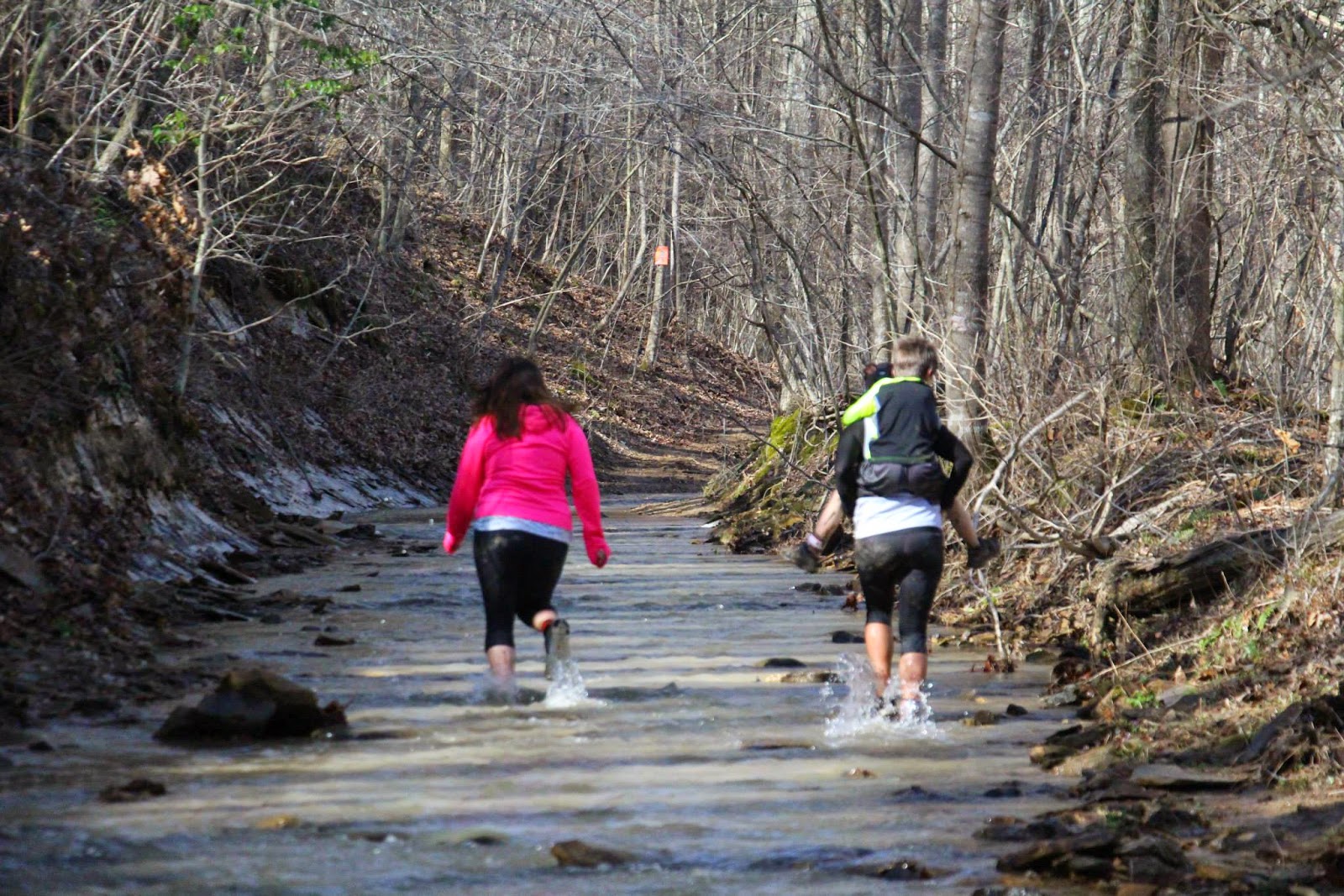 The rope ladder was unexpected but I was up and over in no time and without holding up the two people behind me to much (I hope). 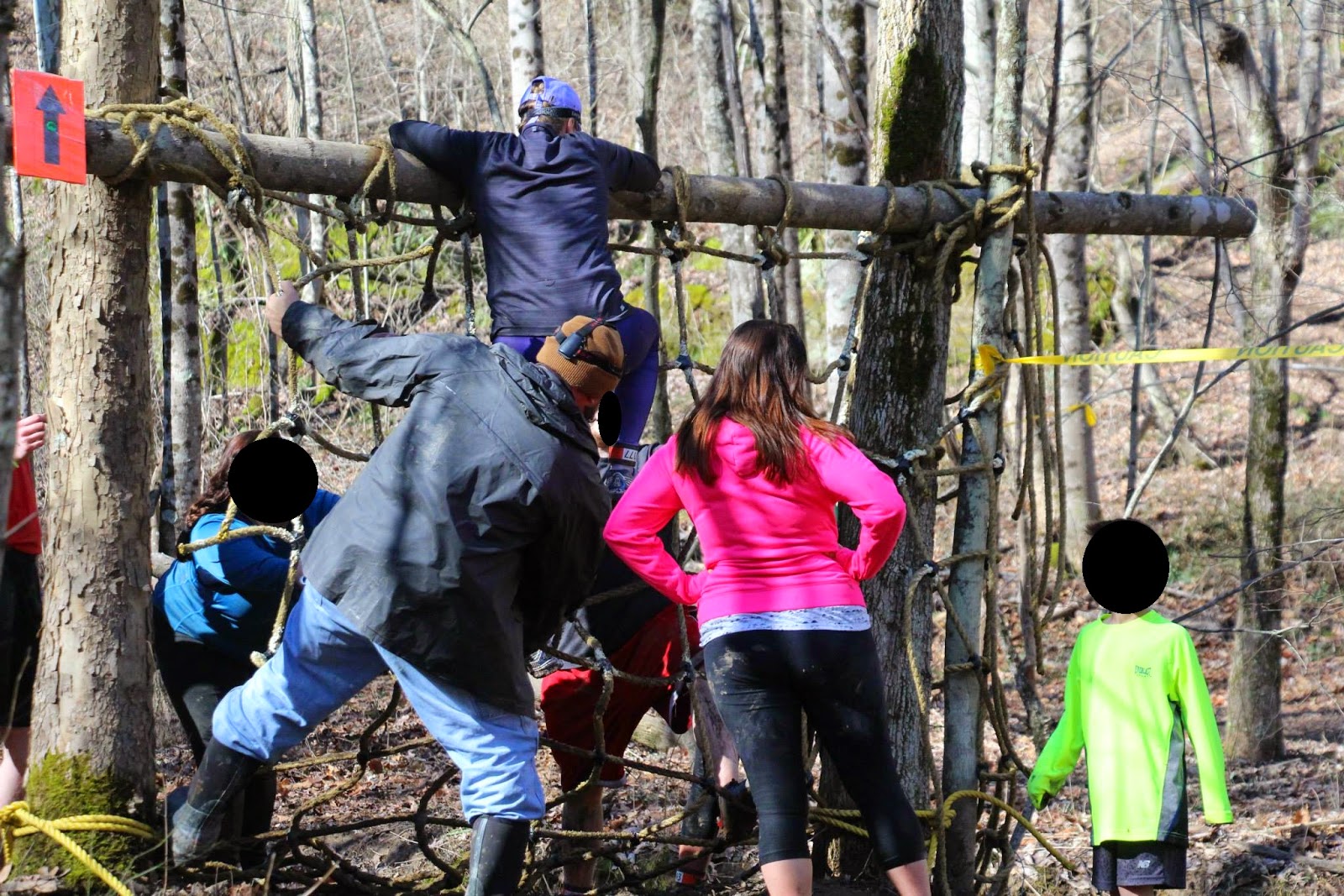 Then came the pond crossing.  You have two choices here.  You can either dive in (like this guy) or run around (like I did).  One of the guys jumped in as I took off around and by the time I made it to the other side, he was dragging himself out of the water and didn't look to great.  I did my "you ok" and got "cold water took my breath" but in no time he was off ahead of me. 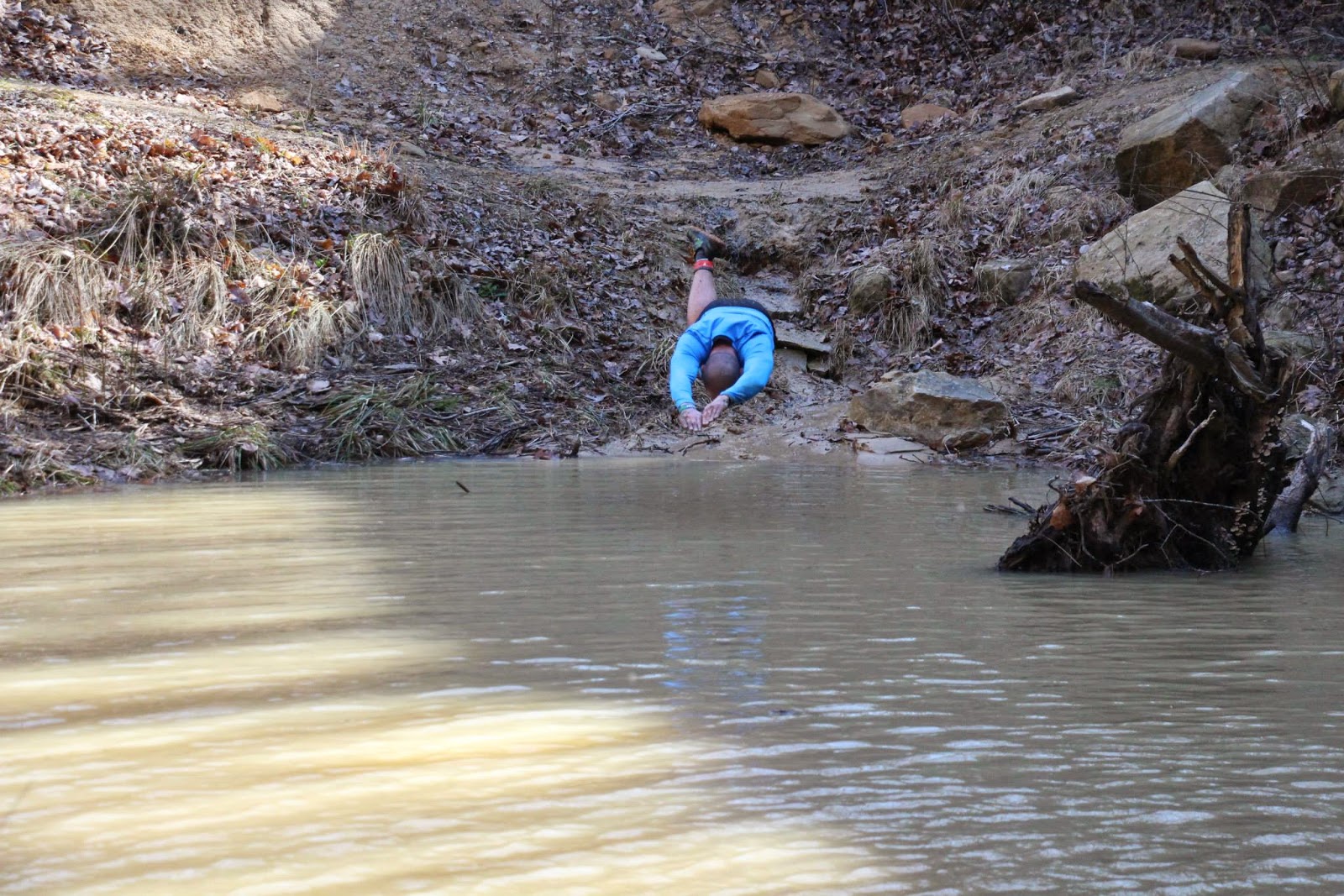 The rope climb was the hardest part for me. This is a rope "assisted" 45-55 degree climb and descents with extreme elevation changes on the trail. It may LOOK easy but it wasn't. This is the only part of the run I had to stop at the top and catch my breath. It wasn't so much the climb as trying to find a good place to put your feet that could get a good grip with all the mud. Once at the top you crossed the mountain to the descent which was about the same thing other then lots more mud. Some people were just sliding down but after breaking my tailbone...I wasn't even going to try that one. 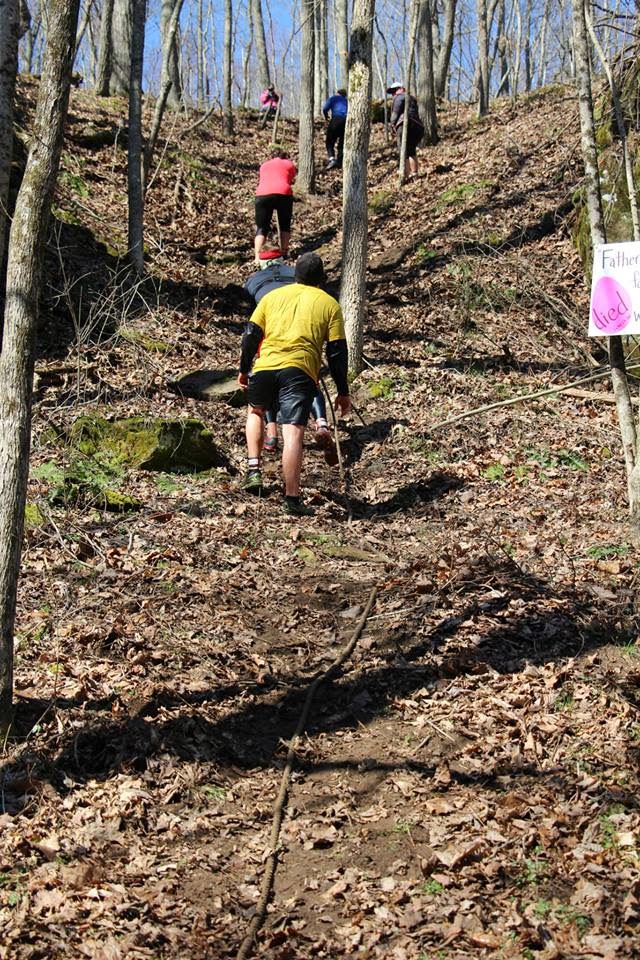 Next as every one's favorite, the Mines!  The mines are 56 degrees and was lit by electric and candles. Passageway is approximately 20-30' wide and 20'+ high with water crossing obstacles that are chest deep.  It is also a sandy trail which is really different to run on if you are not used to it.  Even with the limited lights, I would still take a headlamp because it is really dark and there is several sections which has "steps" that can take you off guard if you are not looking to closely. 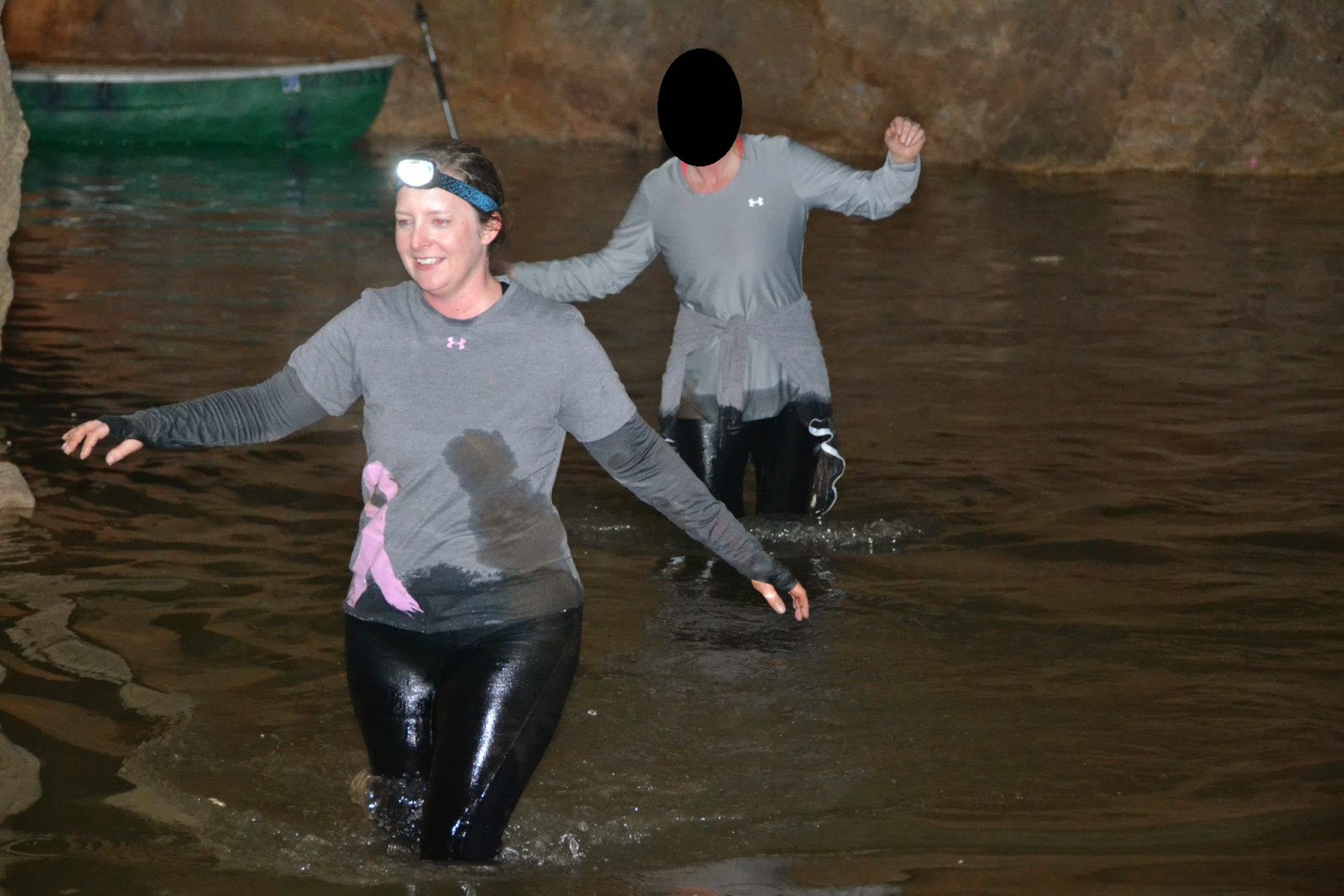 If my headlamp would have saw this guy in the caves, I think it would have made me run faster!  Can you imagine running along in the dark and your light finds this beside of you? 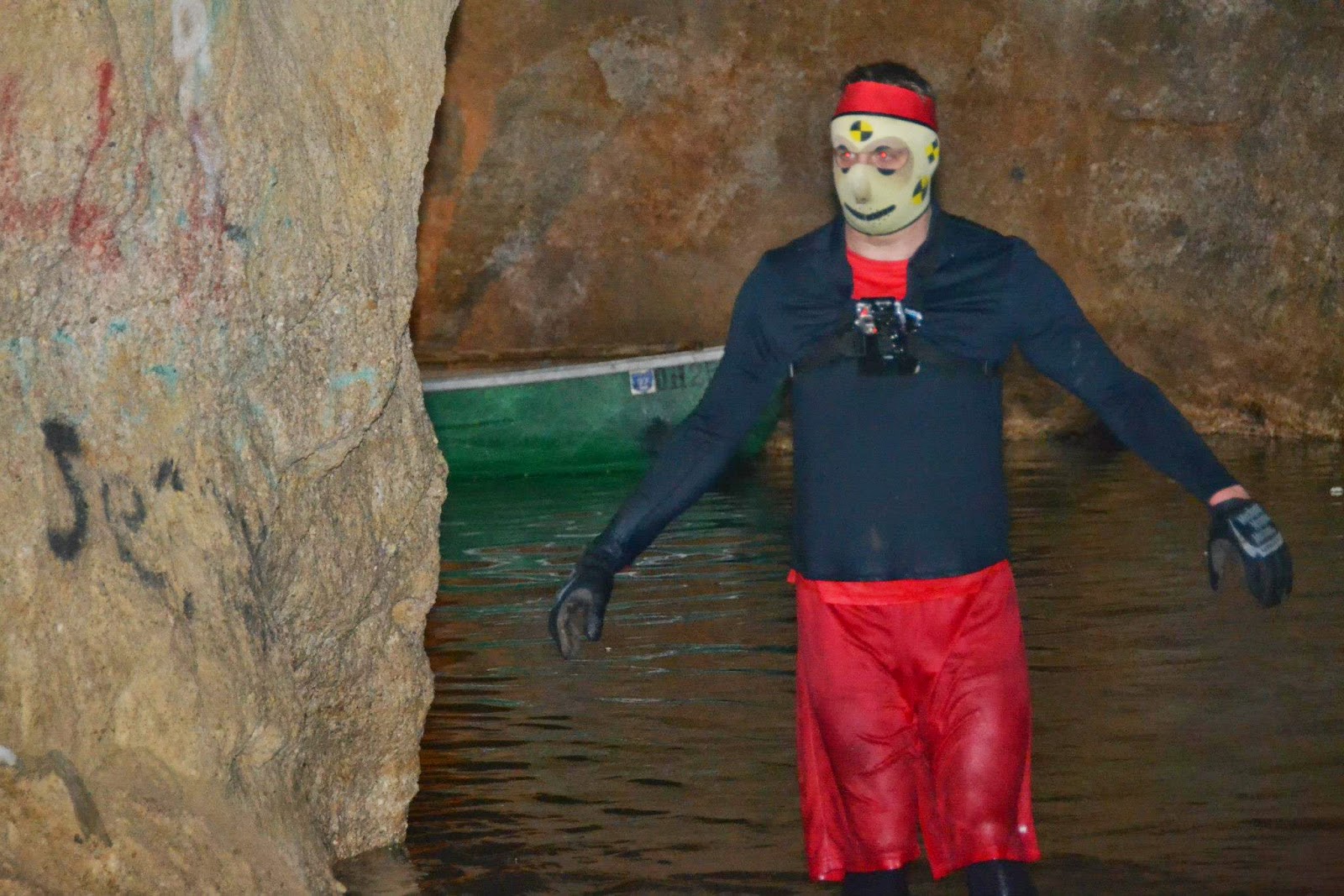 This event had 150 runners and an additional 50 volunteers. I placed 71st overall and 6th in my age group.  Overall, it was a pretty fun run and I do look forward to hitting it again. 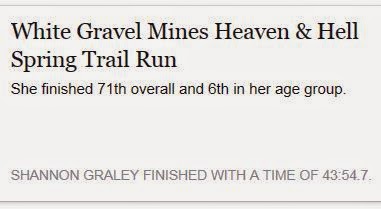 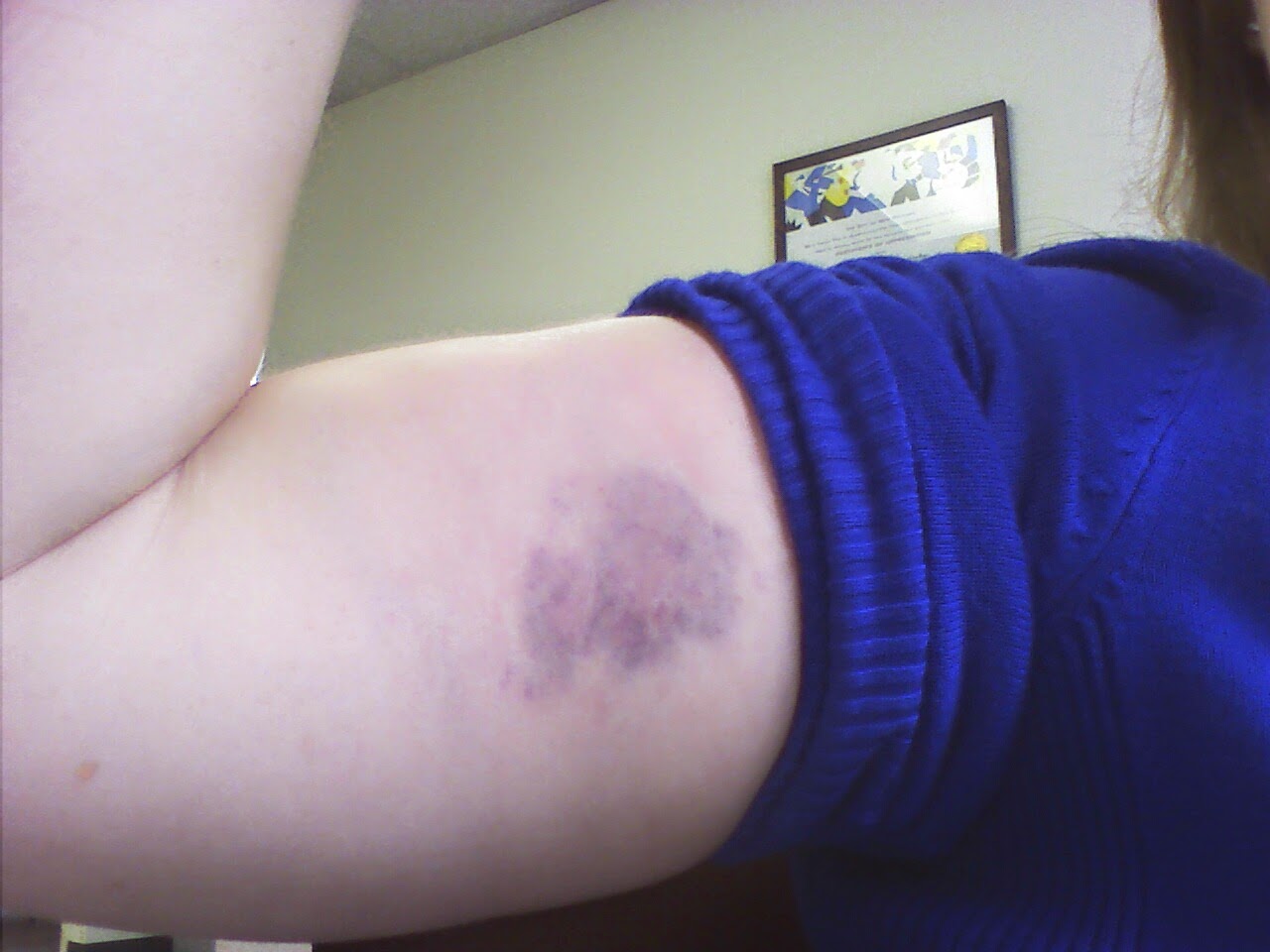