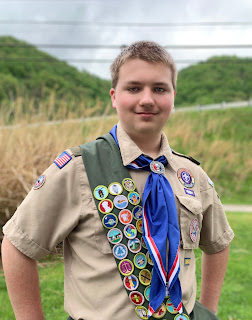 The day has finally came!  After over 10 long years, my kiddo has been awarded his Eagle Scout Award.  I'm not going to lie, there was times I didn't think he would finish but with a little push, he was able to finishing the last few things he needed.  I'm very proud of him!  Enough of the mommy bragging and onto his party.

I didn't get a lot of pictures because the day went by so fast but I was able to catch the ones below so I could pass on the ideas to other scout parents.

I started planning his party after he finished his Eagle Scout Project (which was building a Chimney Swift Tower for the local bird club).  It was right before 4th of July holiday so I was able to pick up a lot of Flag decorations for his theme.  There really isn't a lot of Eagle Scout decorations to be found and they ones that are out there is rather pricy. 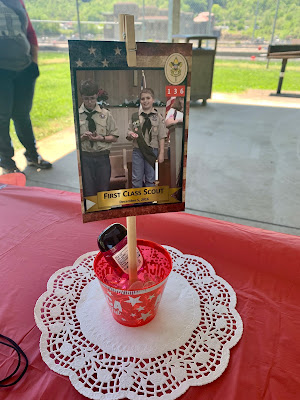 As this was an outdoor party, I got creative with the table holders so the wind wouldn't blow the table clothes away.  The tables was covered in red, white and blue table clothes.  I made a picture from every year of his scouting journey in PowerPoint, adding the patch, troop number, rank and year he received that rank.  The cups came from the Dollar Tree, along with the tiny clothespins.  I bought the wood dowels from Walmart and used hot glue to attach everything together.  Inside the cups, I used rocks to make it heavy.  And as this was the time of COVID, I also had tons of Bath and Body hand sanitizers everywhere.  The cost was around $1 each. 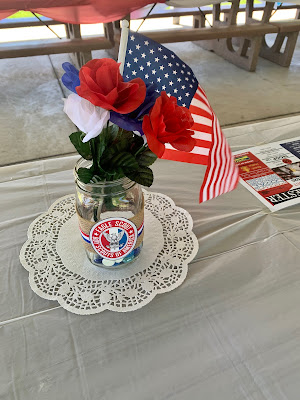 I made these centerpieces for around $4.  I used the mason jars I had on hand and used hot glue to attach the burlap ribbon under the red/white/blue ribbon.  Both can be found at Walmart.  I printed out a copy of the Eagle Scout Patch and glued it to the front.  For the inside, I filled with rocks, red/white/blue flowers with an American Flag, which all can be found at the Dollar Tree during 4th of July holiday. 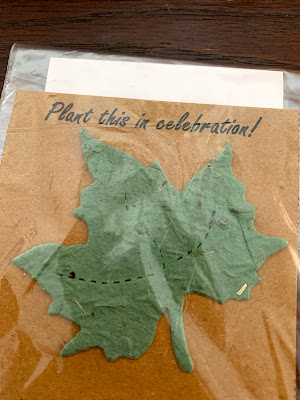 I also thought since this was a Boy Scout Event, it would be nice to give everyone something nature related as a thank you for coming.  I found these wildflower seed leaf paper on Esty.  I made the brown thank you cards using card stock and attached the leaf with a glue dot.  I found the small bags at the Dollar Tree which fit perfectly.  On the backside, I added a small sheet with instructions on how to plant which came from the seller. 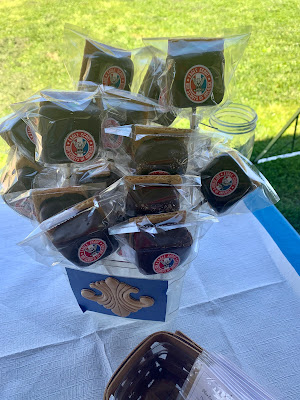 One of my favorite treats to make for parties is the Smore's on a stick.  These are so easy to make and always popular at my parties.  The kids just love them and the adults like to take them home to eat later.  Follow the below simple instructions on how to make them if you want to add them to your party.  I also printed off Eagle Patches and used glue dots to add to the outside bags to give it a personal touch.
To make Smore's on a Stick:  I use sucker sticks and push through large marshmallow squares.  Melt chocolate blocks using a double boiler and dip the sticks in the chocolate, placing on gram cracker to dry.  Once dried, place in candy bags.  All ingredients can be found at Walmart. It's that simple! The 4th of July M&M's also was a huge hit.  Every single bag was eaten!  I bought the M&M's from Oriental Trading which was cheaper then buying directly from M&M.  I used 1/2 cup snack bags, adding 1/4 cup M&M's, and then folding the bag in half, attaching it to the back with tape.  I printed the picture out and used glue dots to attached. 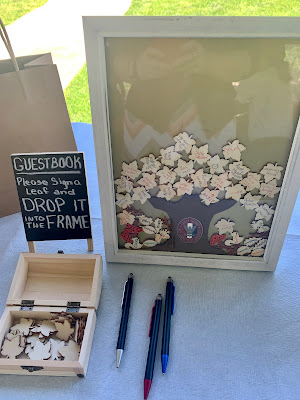 My idea for the guestbook was finding something that I could put inside his Eagle Scout Binder later.  I bought the drop frame from Walmart in their wedding section.  It had a saying on the glass but it was easy to scrap off.  I cut foam board to create the tree, using Elmer's glue to add tree details before painting.  I bought the Eagle medal at our local Scout Store and cut a small opening in the tree for it to fit.  The leaves and animals came from Amazon.  The sign was a small chalkboard that came from the Dollar Tree. 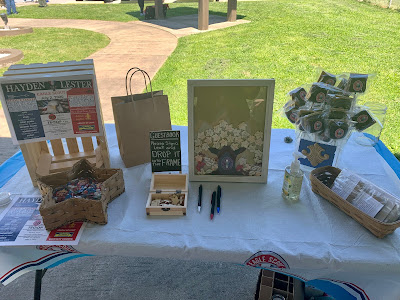 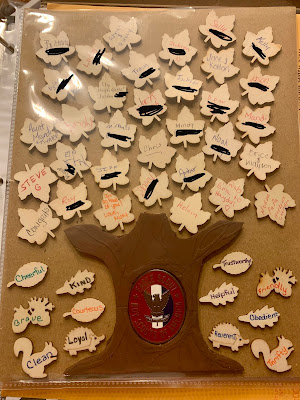 After the party, I attached the leaves to card stock with glue dots and then slip in a plastic three ring cover which will fit right inside his Eagle Scout Binder so he can save everything in one spot.

Food was a little tricky as COVID was still hanging around.  I wanted to make stuff so our guests wouldn't have to use the same spoons while they get food.  My solution was to make everything all ready portioned to grab and go!  We also had pizza as it was easy to grab (not pictured). 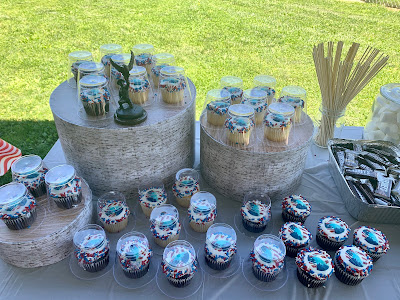 The cupcakes came from Walmart.  You can request the Eagle with Flag edible background which fit in with our theme.  The woodland tree stumps came from Oriental Trading.  They are hard cardboard but really nice looking.  I plan to use them in future parties.  As this was an outdoor party, I covered each cupcake with plastic cups to help keep our wonderful insect population away from the goodies. 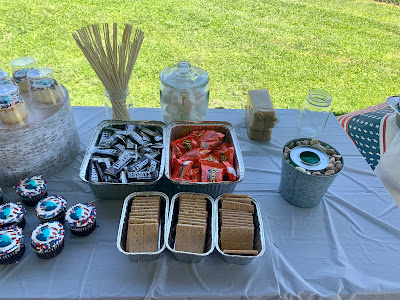 What is a Boy Scout Event without a Smore's station?!  The wind was blowing pretty hard so the "fire" wouldn't light every well.  Luckily, I had some backup candles.  Always be prepared! 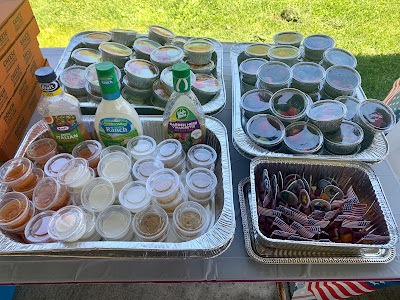 I bought these cool tin containers with lids from Amazon and they were perfect to hold individual salads and fruit cups.  I also put the salad dressing in little cups as well which you can find at Walmart.  To keep everything cool, I put ice in the bottom foil pan and then added the food pan on top.  The ice kept the metal chilled throughout the party. 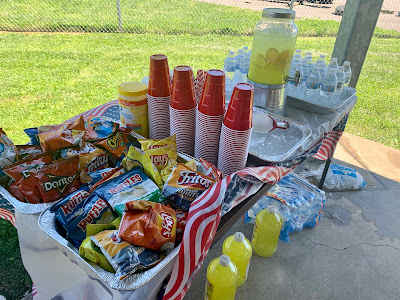 What is an Eagle Scout Ceremony without a recognition letter display.  To make sure the letters did not get damaged, I slipped them inside zip lock bags.  The Dollar Tree had larger gallon bags which came in handy for the larger sized letters.  I then cut card stock to make the boarders.  I found stickers from the Dollar Tree which I wrote who the letter was from and if they were a Scout in the past. 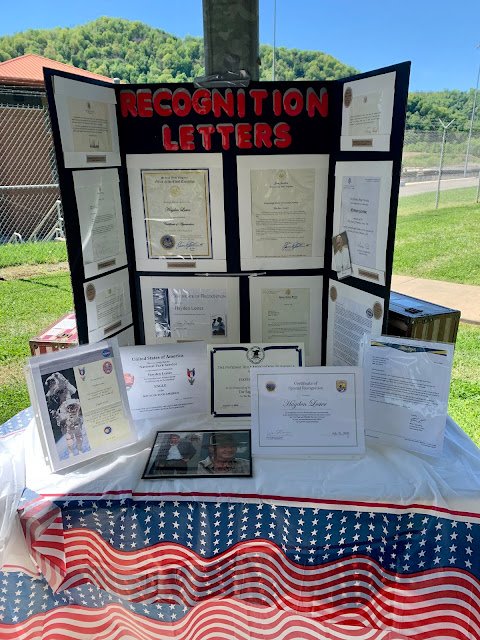 I spent 2 hours setting up for the party and I still didn't have enough time to get all the decorations out.  It didn't matter as the party turned out to be successful, even with COVID!  I have added the links to some of the items I bought to help you find them.  Keep in mind, that over time, these items will go away and the links will be broken.  I hope some of my ideas can help you in your party planning in the future.
Happy crafting! 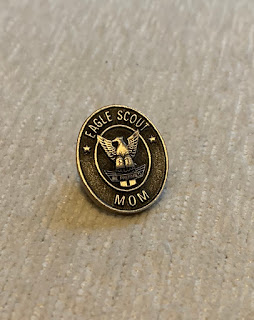