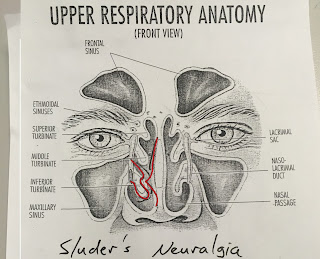 In 2015, I was in the best shape of my life.  Healthy, working out every day and running in over 30 races but I also started getting this horrible headaches.  At first I didn't really notice and the headaches were coming more and more often and I was having to use sick days which I had never did before.

I started keeping track and noticed that while I ran I would always get this copper taste in my mouth. Also, the pain normally started a few hours after I ran or cut grass but not for other things like hiking or weight lifting.  They always started on the right side of my nose and eye but would travel upward to my forehead.  The pain was massive and would always lead to throwing up and last for days to weeks.


In February 2016, I finally told my doctor about them and she said it was most likely because of not enough blood flow to my brain and put me on Propranolol 20mg daily.  I took these for a month but still the pain continued.  She also did a scan of my brain to make sure she wasn't missing something major.  It came back clean.

In November 2016, I went to see a Neurologist which said that I may have what is called "Runner's Migraines" and wanted me to only run 1/2 mile at a time to see if the headaches went away.  He switched me to Amitriptyline 10mg daily and Sumatriptan 100mg for when the headaches hit.  I still had the headaches and the Sumatriptan would help them go away but it also made me sick to take and I was only supposed to take them once or twice a week.

In April 2017 my doctor upped the Propranolol from 20mg to 40mg and now I had high cholesterol from taking the other meds so I was put on Atorvastatin Calcium 10mg to counter that.  It still did not help.

In September 2017 the pain was so bad I had to go to get help.  The right side of my face was hurting worst then it ever had.  My upper teeth were a new added pain and I couldn't eat anything.  It just so happened to be on a holiday weekend so finding help was a chore.  I first thought it might be a toothache and tried to get into see a dentist but everyone was closed.  I ended up going to sick call with my normal doctors office.  The Doctor on call put me on Clindamycin 150mg.  The pain did not go way so the next day I went to a walk in clinic and they put me on Doxycycline Hyclate 100mg plus Ibuprofen 800mg.  The pain was worse so I finally went to the ER.  There he did a CT scan and only found a small sinus infection and put me on Levofloxacin 500mg plus Hydrocondone 325mg.  I took these for 10 days and felt better then I had for the past few years.

At this point, I had pretty much given up ever running again and the headaches never seemed to go away.  I had sunk into such depression and these headaches had taken over my life.  As a last resort, I contacted an Ear, Nose and Throat doctor, thinking he would test me for an allergy but really not holding my breath that he could do any better then the last 5 doctors.

Dr. Phillips listened to my story and right away thought he knew what the problem was.  He sprayed my right nostril with numbing spray and then stuck a small camera in the nose.  There he found what he thought my problem was....Sluder's Neuralgia.

My first thought was, here we go again.  Something new to add to my list of ever growing "it could be."  He brought out this little diagram and explained what Sluder's Neuralgia is. 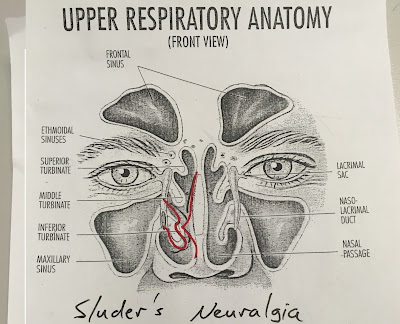 This picture shows what a normal nose (right) looks like compared to what mine (left) looks like.  Sluder's Neuralgia (also known as contact point headache), is rare and extremely frustrating along with causes much anguish and suffering in patients.  It is a stabbing/sharp pain located in one area or spot on the face caused by a structural abnormality, where nerves are being compressed by a septal spur (or deviated septum)  and needs to be surgically corrected.

As in my case, when I would run, the nerves would swell and hit the spur on the right side of my nose.  This would cause it to be blocked and cause the pain.

After doing my research on Sluder's Neuralgia, I noticed there is not a lot of information out there.  I was only able a few articles that seemed helpful.

As the articles states, these headaches can go many years without getting a correct diagnosis. You can try nasal sprays, antibiotics, decongestants, see a dentist, have CT scans and MRI's but none of these will help or show Sluder's Neuralgia and is often misdiagnosed as migraines.

How Doc found it:

He sprayed numbing stuff up my nose which is nasty as it drips down your throat so be warned!  I told them they need to come out with bubble gum flavor.  After a few minutes he was able to put a small camera up the nasal passage which allowed him to find the problem.  This was painless and only a slight discomfort.
He wanted me to try Afrin Nasal Spray again before we went on to surgery.  So I went on two separate runs, spraying Afrin when I felt the pain coming on, but it did nothing.
At my next appoint, we decided to go forward with the surgery.

Two weeks prior to surgery, you are not allowed to take most medications, herbal supplements or drink green tea.  The day of the surgery, you must not eat and make sure you take someone with you to drive you home because they are going to knock you out.
You get an IV and need to spray more nasty stuff up your nose before they knock you out and put in a breathing tube.  The surgery really only lasts around 30 minutes.  After doc cuts out the spur, he puts in two splints inside the nose, held together with stiches.
You stick around until your able to dress and leave with a cute nose guard to catch the blood.  You will need to change the gauze several times over the next 2-3 days.  It may be helpful to have extra gauze on hand in case you don't get enough when they send you home. 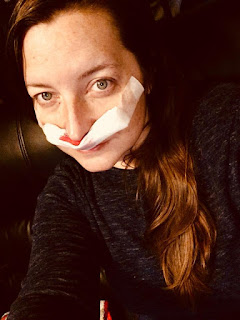 I went back to the Doc 12 days later and he removed the splints.  Don't be like me and watch them doing this on youtube because it's just gross.  He sprayed some of that wonderful nasty numbing stuff in both sides of my nose.  He then sprayed some cleaner and vacuumed both sides clean.  He then cut the stitches on either side of the nose and pulled the split out.  He then sprayed it again and vacuumed it clean.
I also got his go ahead to run so that is just what I did.  I went to the gym and did a slow 2 miles.  There was a little discomfort but I'm thinking that may have been from the splints.  The pain I normally got did not raise its ugly head but it was short lived.

Conclusion:
It has been over two months since the surgery.  I have mixed results.  The pain on the right side of my face is gone and I can breath a lot easier, something I didn't even know was an issue.  The bad side is that I still can not run without getting a migraine.  I ran in a 5k last month and ended up with a migraine that lasted 5 days.  Hiking long distances seem to be an issue now as well.  My last 6 mile hike ended up with a headache that lasted for the rest of the day.  Nothing major as before, though.  The pain is now around the superior turbinate/lacrimal sac area between both my eyes.

Doc wanted me to try Ponaris Nasal Emolient but so far that doesn't seem to be working either.

So....I'm happy to not have a pressure in my nose all the time and the surgery was great for that but I'm disappointed that I have to give up running.