In 2014, I wrote about my experience with the Nutrisystem 5 Day Weight Loss Kit and dropped 2.2 pounds in the first five days.  Overall, I liked the box but all the meal replacement bars were not my favorite.  I really dislike those things.

Recently, I found that Nutrisystem has a FROZEN 5 Day Kit and I have decided to try it for the next 15 days.  The box arrived well packaged and still frozen. 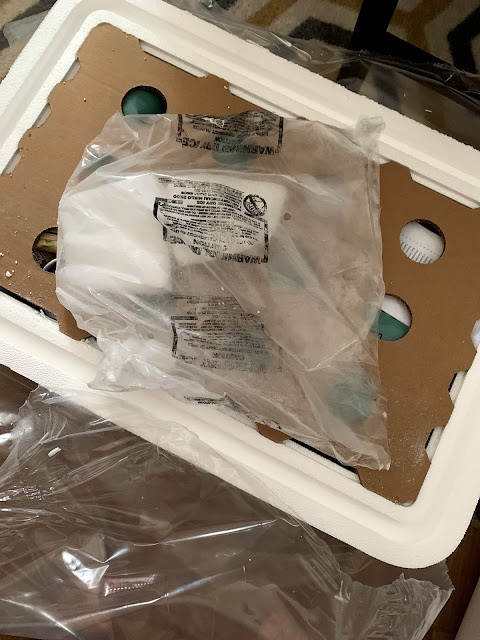 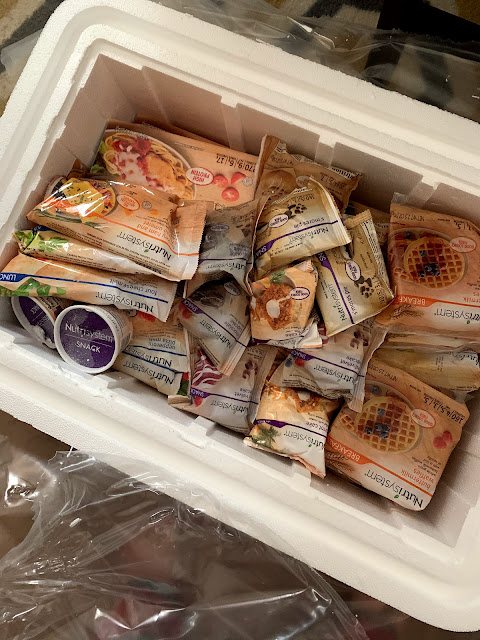 Below is a pictures and what I thought of each meal.  I will keep you posted as to how much weight I lost every five days! 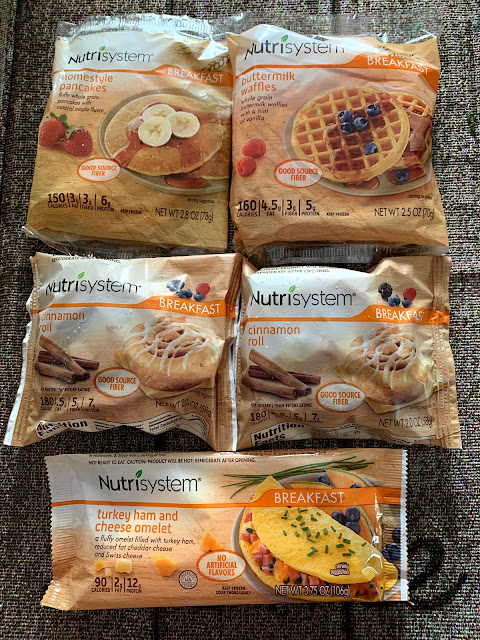 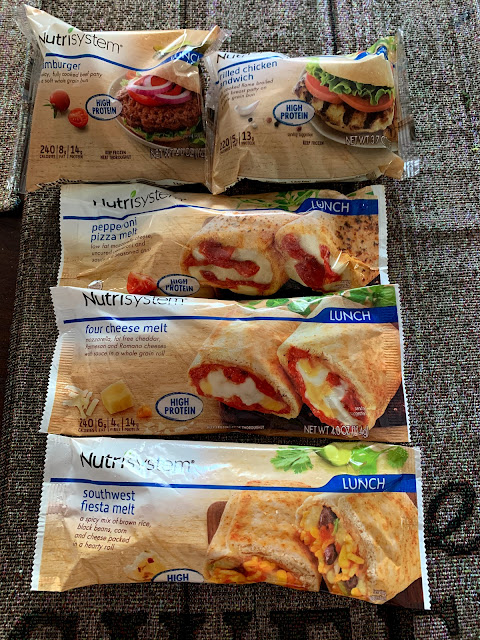 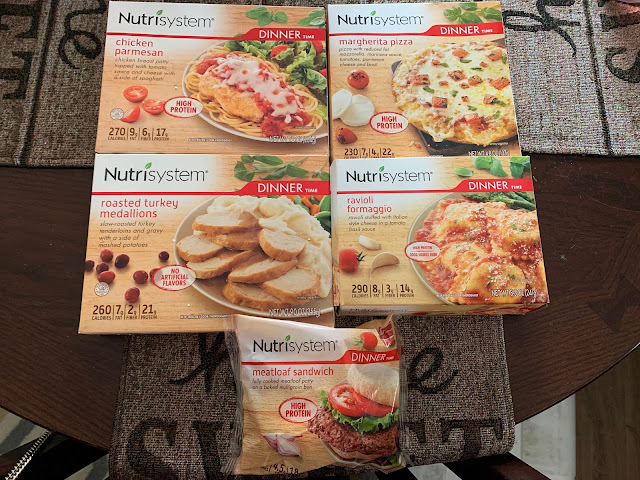 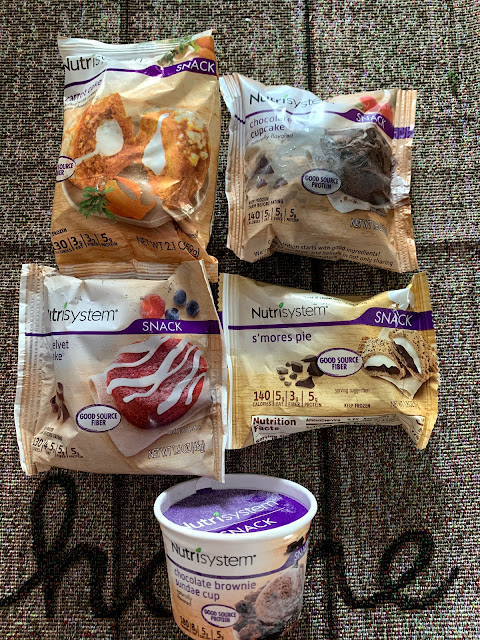 I ordered 3 kits from Walmart and it was delivered within 2 days.  The food comes in a cooler with dry ice.  When I opened the box, it was pretty cold.  There was plenty of dry ice left and the food was all still frozen. 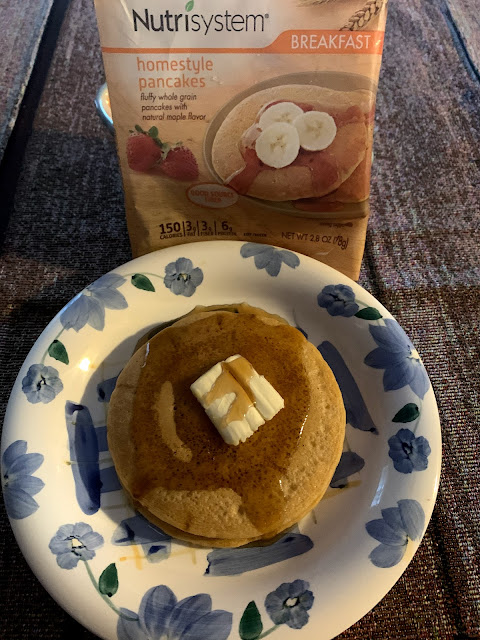 My first breakfast was the pancakes.  I'm not a huge pancake fan on any given day so I didn't have high hopes.  As far as taste, there really wasn't any without the syrup and the tiny piece of butter I put on them.  I ate them but without taste, I can't say that I liked them. 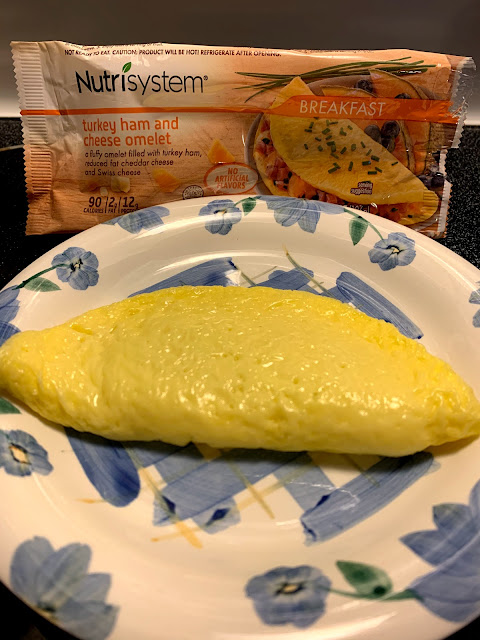 My second breakfast was the turkey ham cheese omelet.  I'm not that crazy about omelets so I added some hummus to this in order to eat it.  It was pretty good.  I liked the chucks of ham but didn't really care for the egg.  I think I would have liked it more if it was scrambled.  Omelet people, I'm sure will love this. 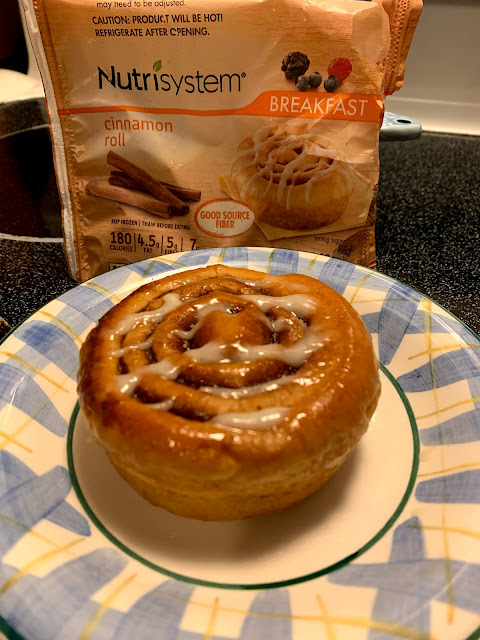 The box gives you two cinnamon rolls.  So I had them for the third and forth day.  These really hit the sweet tooth and were very good after a few seconds in the microwave.  They were soft and tasty.  Although for some reason, I really wanted eggs on the forth day.  I'm kind of missing fresh food by the forth day. 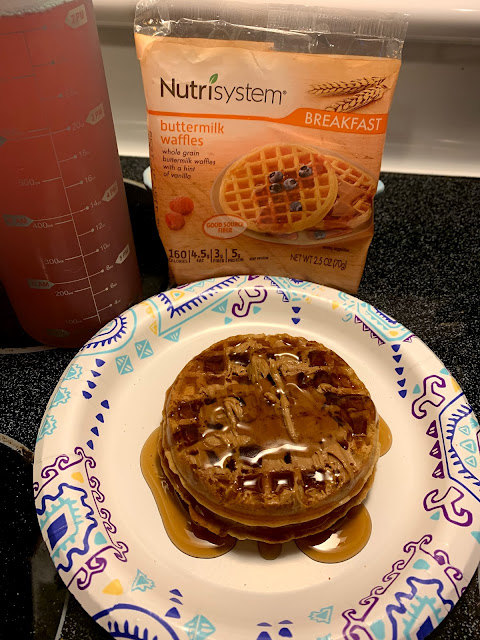 My last breakfast was the waffles.  I added syrup and peanut butter (something I started doing during boot camp to add that extra protein).  The waffles are matched to any frozen that you would buy.  I popped them in the toaster and they came out nice and crispy.  I could eat these over and over. 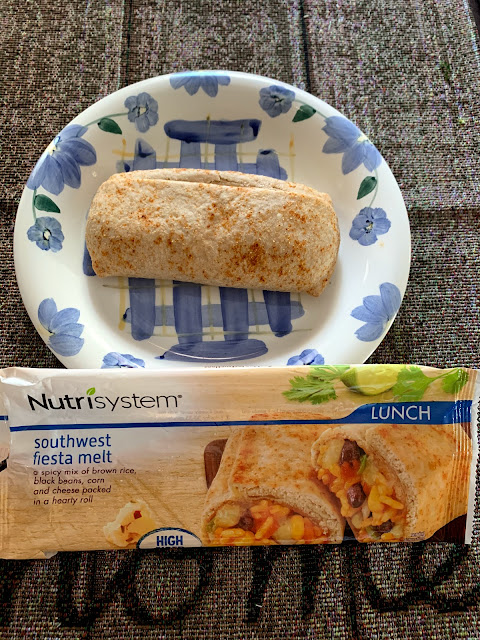 For my first lunch, I picked the Southwest Fiesta Melt.  I was really surprised that I really liked it.  If you like frozen burritos, you will love these.  Instead of a hard tortilla shell, the outside of this was soft and none of the inside filling leaked out.  I would not mind eating these all week. 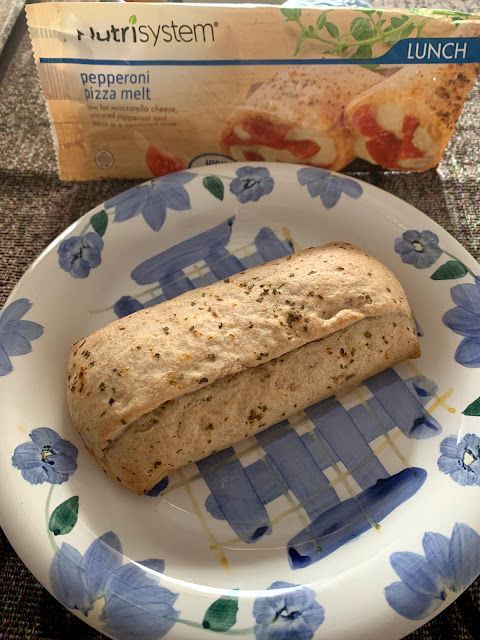 Day 2 lunch I picked the Pepperoni Pizza Melt.  Just like the Soutwest Melt, I really liked it.  It had the same bread but filled with pizza flavors.  Just like a pizza pocket but I like the bread on this product a lot more.  I would add this to one of my favorites. 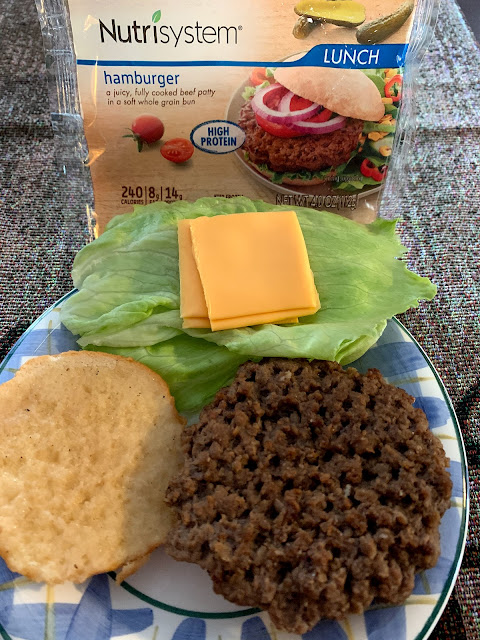 For lunch on the third day, I tried the hamburger.  I may have cooked it to long in the microwave as the bun on the bottom was hard as a rock in the middle.  I couldn't eat it but the rest was rather good.  I added some cheese, lettuce and mustard which is also allowed on the plan.  It was small but filled me up.  I will try less time to see if it changes the bottom bun later in this experiment. 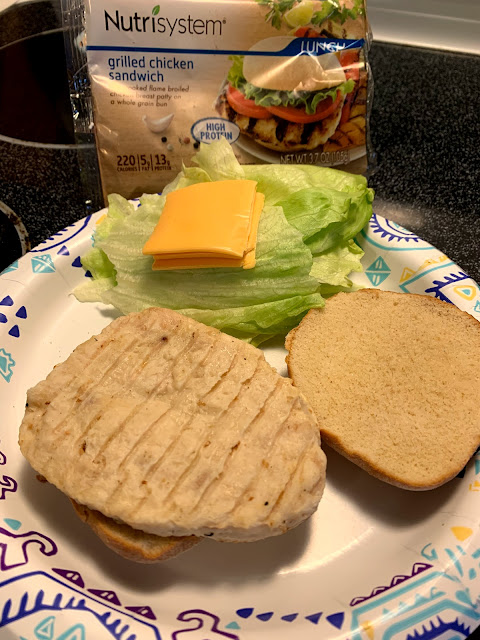 On the forth day, I finally at the grilled chicken sandwich.  It wasn't my favorite.  I added lots of hot sauce to give it taste.  It did it's job and filled me up though. 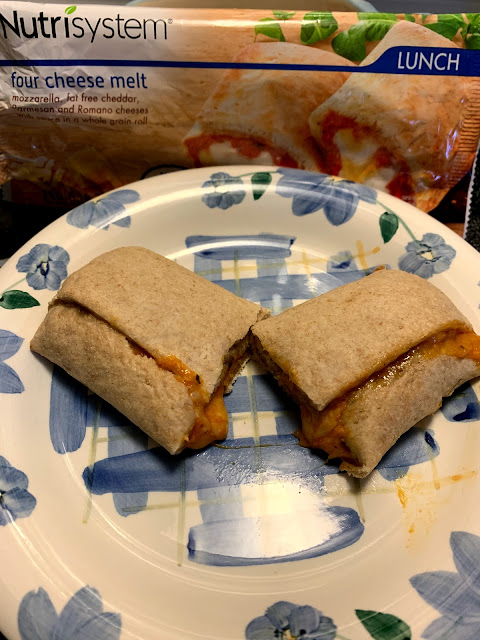 On the fifth day, I had the four cheese melt.  It was ok but I added some salsa to give it a little more taste.  If you like grilled cheese, I'm sure you will like this.  It was filling and did taste rather good. 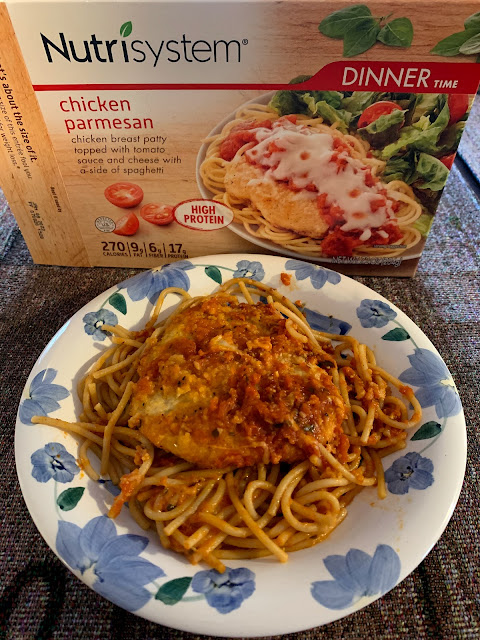 My first dinner was the Chicken Parmesan and it did not disappoint.  The chicken was moist and had a great taste.  The pasta was soft and also rather tasty for a frozen meal.  I could have used a little more sauce BUT there is a reason why these are weight loss meals.  I would enjoy another one of these meals. 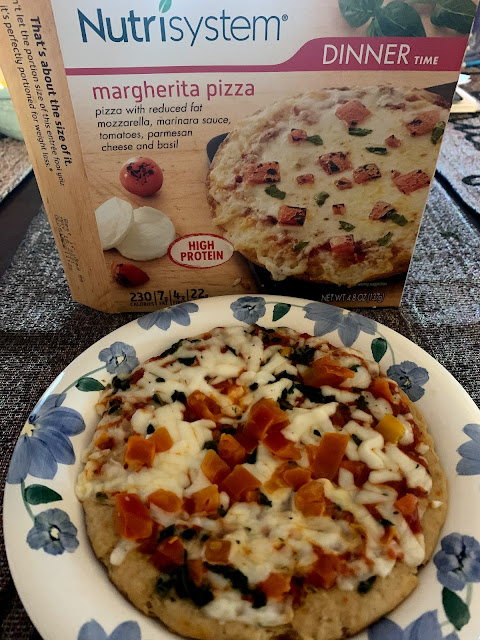 It was a pizza day for day 2.  I had the margherita pizza.  As for the pizza crust, it was surprising crunchy which I really enjoyed.  As for the toppings, I have never had a margherita pizza so I can't say if this one compares to that.  It was ok but I didn't care for the flavors.  I may change it up and add more veggies the next time I try it to see if that helps. 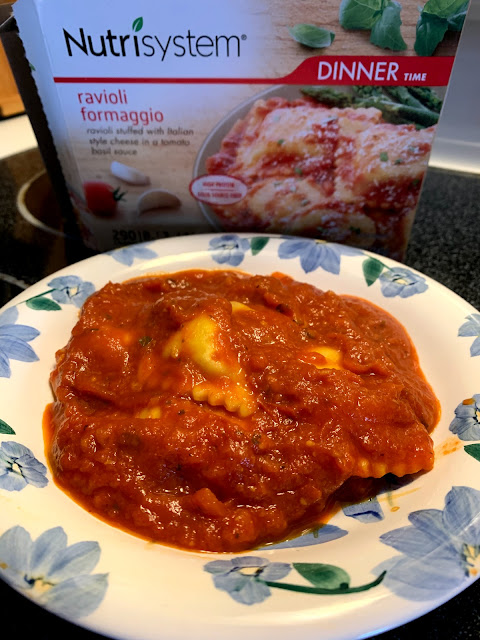 For dinner on the third day, I picked the ravioli formaggio.  This was very tasty and I enjoyed the amount of sauce that went with it.  The stuffing was a little weird tasting but the sauce made up for it.  There was five ravioli in the meal which was plenty for me.  I could eat this again and again. 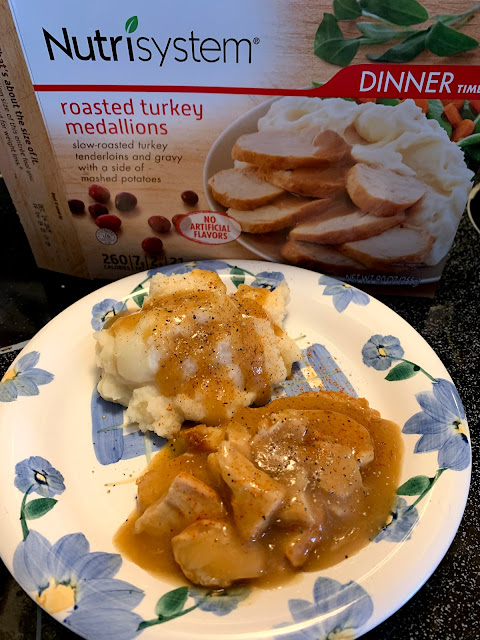 Fourth night was a turkey night.  I was craving mashed potatoes so I'm glad I saved this meal until the end.  I tried the potatoes without the gravy and didn't care for the taste.  I added the gravy, sriracha salt and pepper which ended up giving it a great taste and I enjoyed this meal.  It is a match to any other frozen turkey and mashed potatoes meal you would buy. 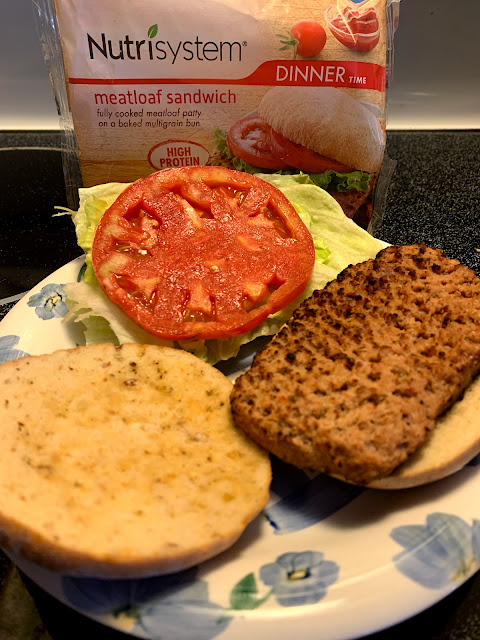 Fifth day was the one I just knew I didn't want to eat.  The meatloaf sandwich (yuck).  I wouldn't eat this on a good day but I choked it down.  If you like meatloaf, I'm sure you would find this good.  I, however, did not like it and would not want to eat it again (but I have two more to eat later). 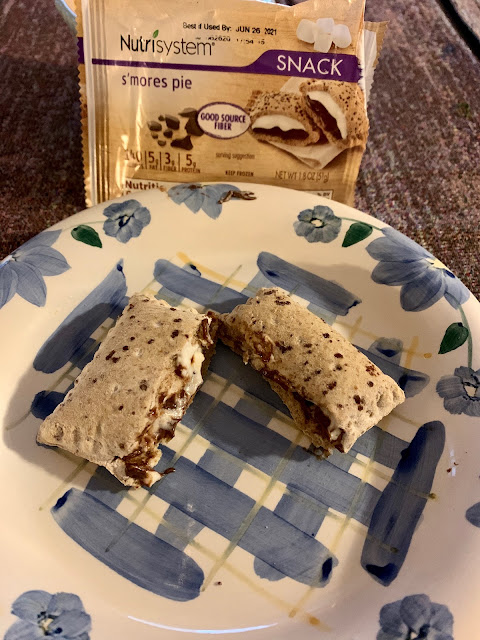 My first snack was the s'mores pie.  I got three words for you...I NEED MORE!  These are so good.  I would have preferred a more gram cracker crust taste but even without it, it was really good.  The chocolate and marshmallow was soft and melty.  The box only gives you one but I could have eaten these at the end of every day. 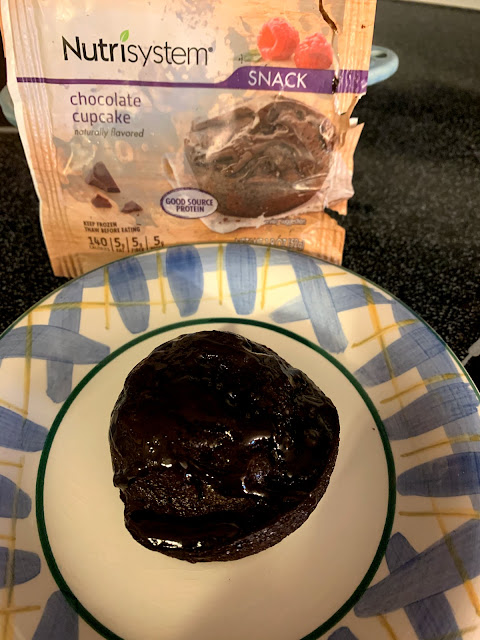 Day 2 I wanted chocolate so I picked the cupcake.  The package does not say to warm it up but I really didn't want a cold cupcake so I stuck it in the microwave for about 15 seconds and it came out supper yummy.  It was the perfect amount of icing to give you that taste without the calories.  I could eat these every day.  So good. 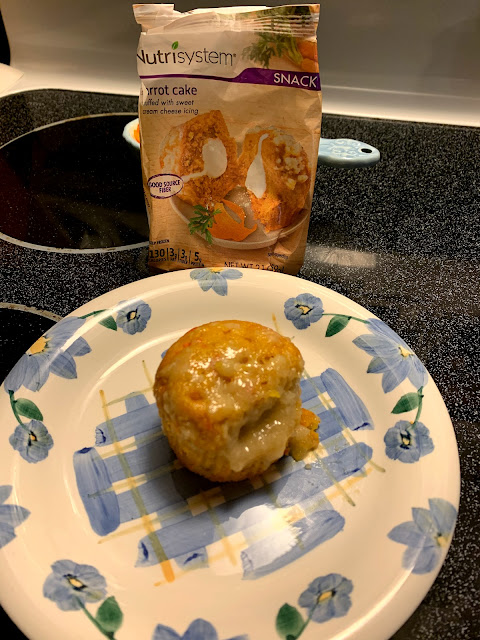 Day three snack was the carrot cake.  I'm not that crazy about carrot cake to start with but this one wasn't bad at all.  It had little bits of carrots in it and the topping/middle had just the right about of sweetness.  As you can see by the picture, it didn't really look pretty and the middle was cut open right out of the package but it didn't hurt the taste any.  The package said to let it thaw but I tossed it in the microwave for 20 seconds and it was perfect. 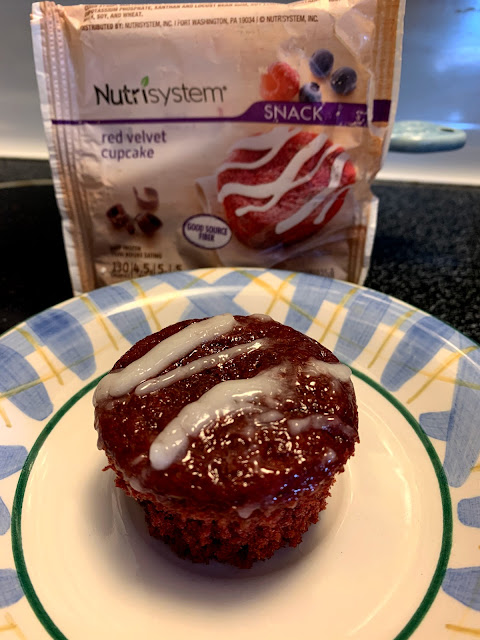 Forth snack was the red velvet cupcake.  Not really much to say as it was just like the other cupcakes.  Once warmed up, it was good. 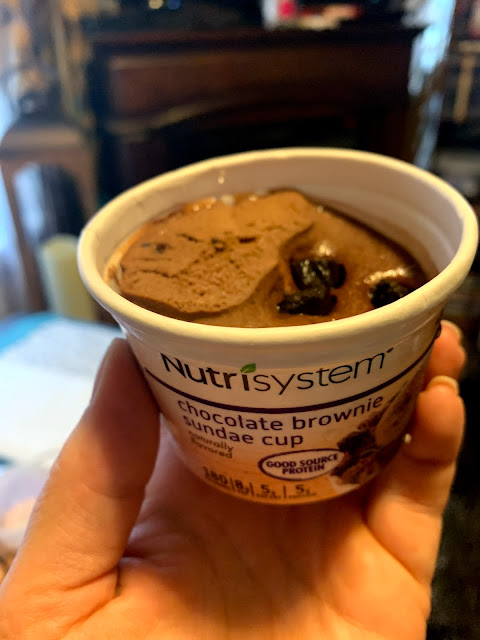 On the last day I had the ice cream.  I really don't care much for ice cream so I saved this one for last.  A fan of ice cream will love this.  It has a great chocolate taste and the brownie pieces are soft and chewy.  It was a little hard so I ate small pieces until it could thaw a little.  I normally keep tiny cups of vanilla ice cream for my dog to enjoy on hot days.  Scout just happened to see me get this cup out and went crazy cause he thought it was for him.  I ended up having to give him an ice cream as well!

After five days, I have lost a total of 2.2 pounds and I didn't feel like I was missing out on anything or starving.  In fact, I skipped some of the extra's that I was supposed to eat (4 cups veggies, 2 SmartCarbs and 2 PowerFuels).  Each day was around 1200 calories.  It is a great program and helps me understand portion sizes, which is my biggest mistake.  I eat the same meals but I'm over eating at each meal.

I have ordered two more boxes (10 days of food) and will continue in hopes of dropping five more pounds while using this.  I will let you know.