When you think about trains the one that comes to my mind is the Polar Express.  In 2004 the children's movie was brought to the big screen putting every child's imagination to life.  The movie is based on a young boy who has his doubts if Santa is real.  One year on Christmas Eve, a magical train arrives and takes him on an adventure to the North Pole to meet Santa.  Although I'm really not a BIG fan of computer animated cartoons (I prefer the original), the movie weaved a wonderful tail of new friends and Santa magic along the way.

After the movie, cities started having their own "Polar Express" rides for the children.  I've been lucky enough to have taken my child on four Polar Express rides in his lifetime and I plan on doing them as long as I can squeeze it in before he gets to big to do it anymore.

Our first Polar Express trip was with the Cuyahoga Valley Railroad.  These tickets are so popular that they have to hold a lottery each year.  You must fill out your form of preferred days and send your money well in advance.  As the day gets closer the tickets will be mailed to you.  The night of the Polar Express ride, the children arrive in their PJ's and ride the train to the "North Pole."  Santa gets on and talks to each child on the ride back.  I thought this was a wonderful ride and planned on doing it every year but my plans changed and we moved out of state.

Our first Christmas in WV I spent searching for a Polar Express ride close to where we lived.  Jackpot!  I found one on the Durbin & Greenbrier Valley Railroad in Elkins, WV.  I ordered our tickets and went shopping for new PJ's.  It was a good drive from my house but there is a Holiday Inn next to the railroad so I booked us a room for the night and didn't feel like I needed to rush. 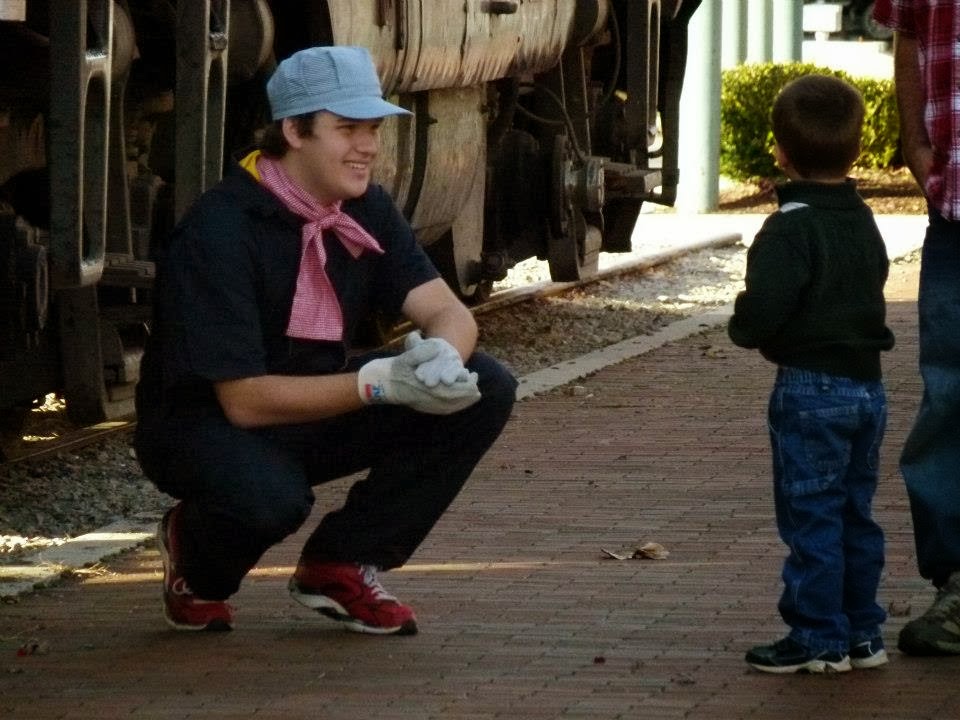 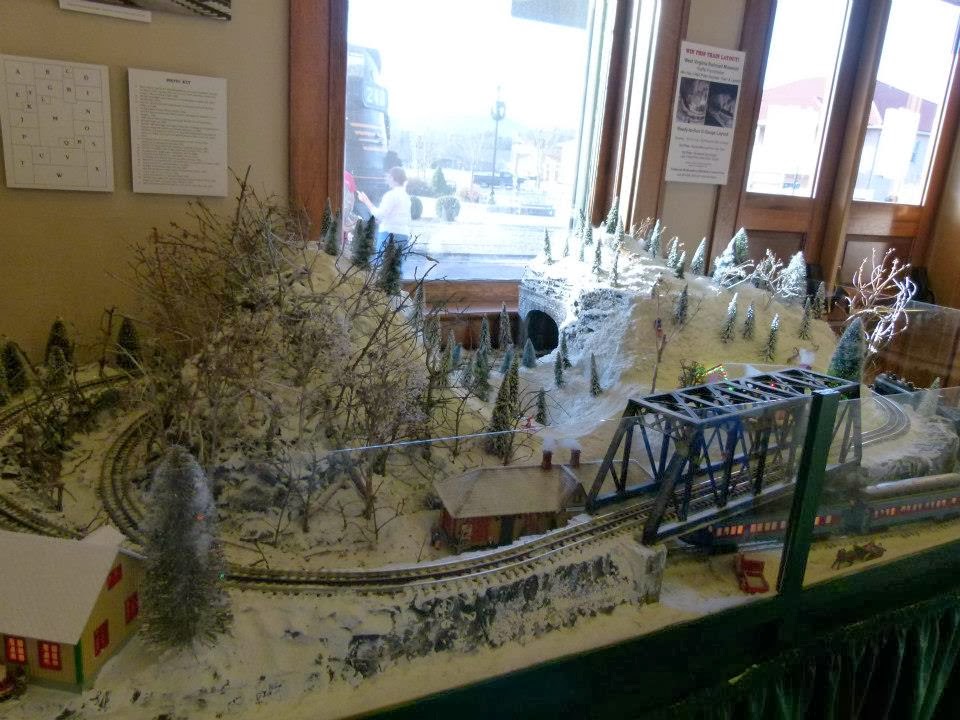 We arrived at the station early and waited to board.  While we waited the Railroad had several people dressed as Elves and Candy Canes that entertained the children.  They also had a miniature train set and gift shop to look in while waiting for the conductor to call your car.  Ten minutes before boarding, I was surprised to see close to 20 Chefs, dressing in all white (even hats) marching toward the train and singing Christmas songs.  They looked so much like the Chef's in the book that the children LOVED this. 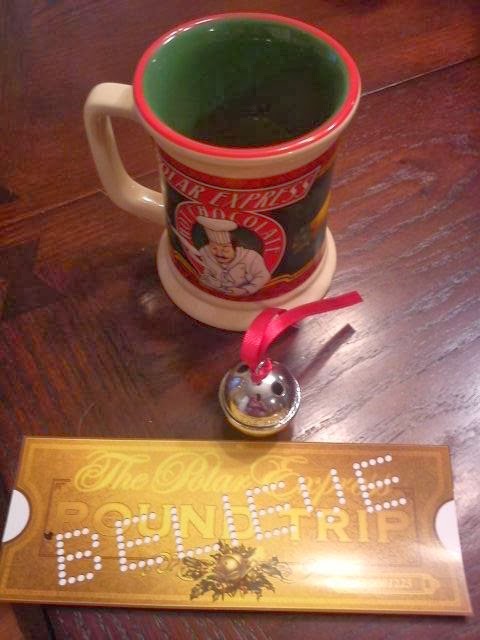 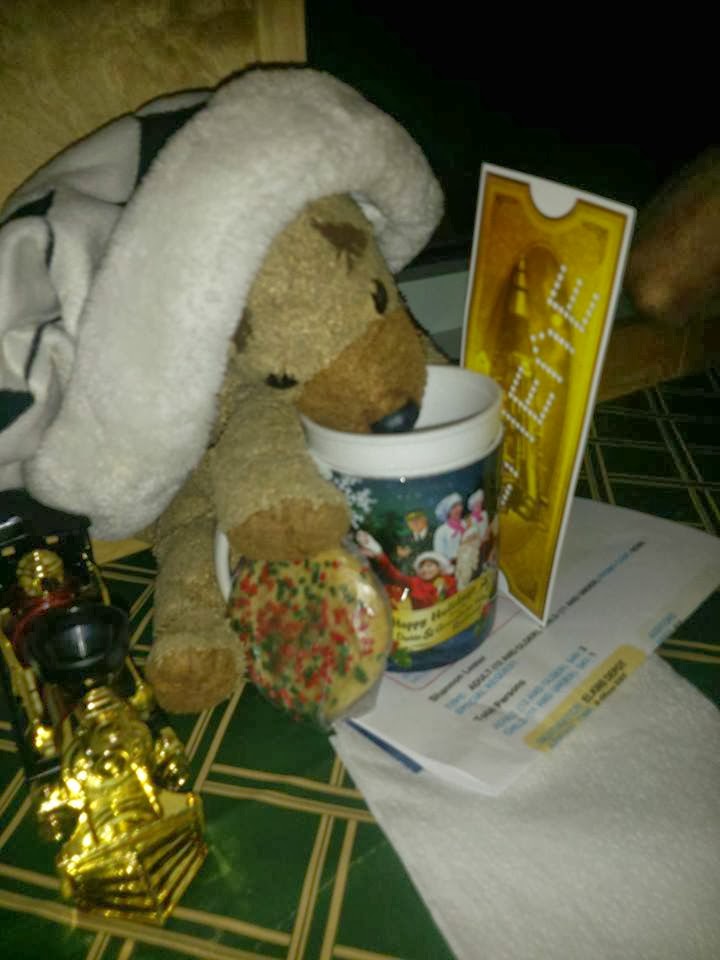 Our seats were called and we boarded the train.  The conductor gave each of us a golden ticket and told us to hold on to them for later.  The train was old but a classic.  Instead of train chairs attached to the floor, this train had tables with four chairs lining each side of the walls.  Awaiting us on the table were cookies and a glass mug we got to take home as souvenirs.  They were even nice enough to have a throw-away cup tucked inside the mugs so we didn't have to carry dirty mugs home.  So very smart. 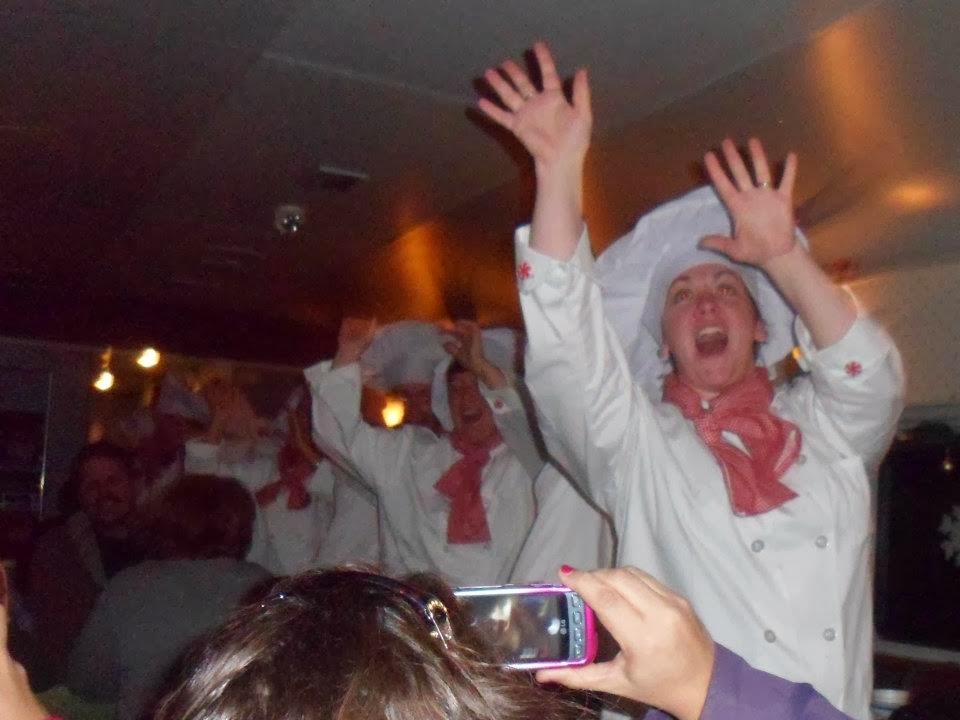 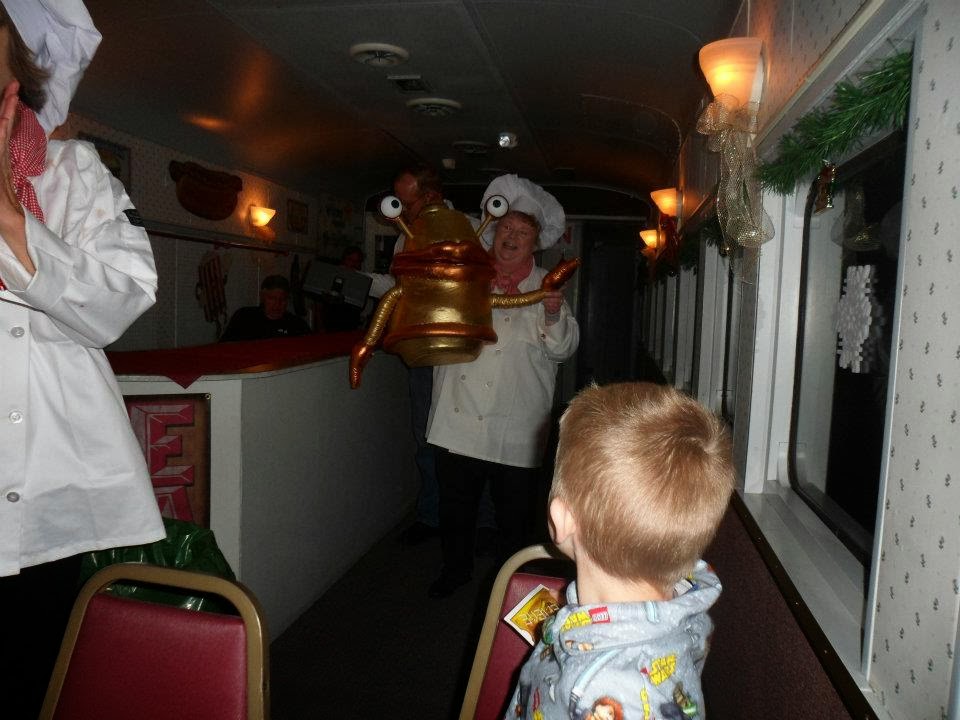 As the train started moving we got to watch the houses pass by.  And since this is WV, we also got to see plenty of deer eating in fields and the children thought it was real reindeers.  Not long into the ride, the Chef's all piled into our car.  Music started and they began to sing and dance to Hot Hot Hot Chocolate.  This was an amazing surprise and I had a ball watching them.  After the finished they filled our cups with hot chocolate and moved on to the next car.  A few of the Chef's stayed behind and while we ate and drank, they read the Polar Express book to the children.  During the rest of the ride, we were entertained by the Conductor "stamping" our tickets and the hobo hiding from the Conductor. 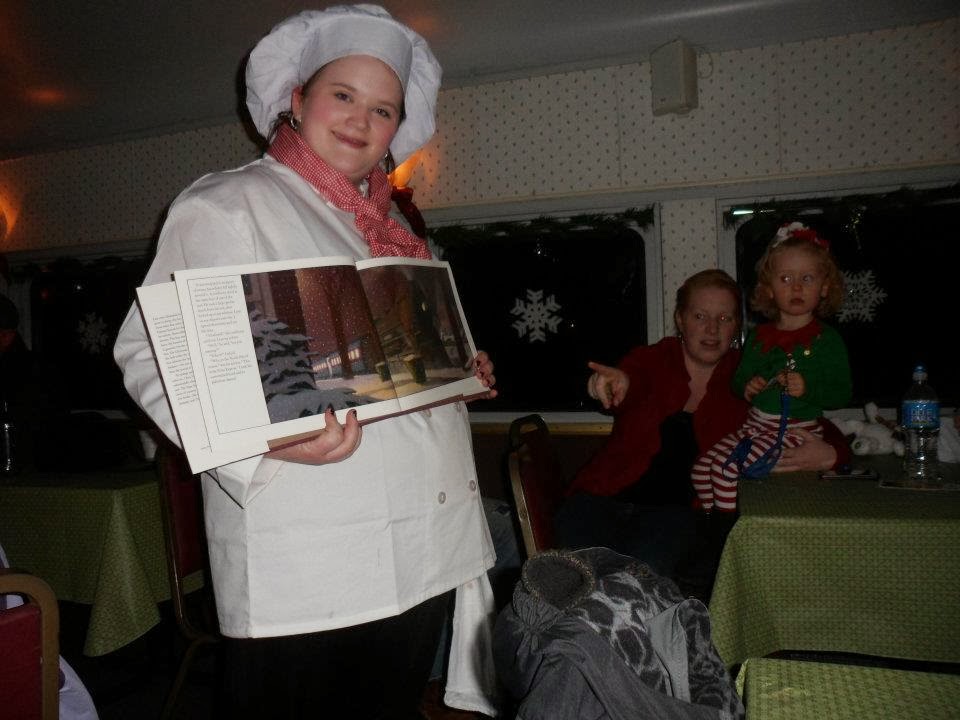 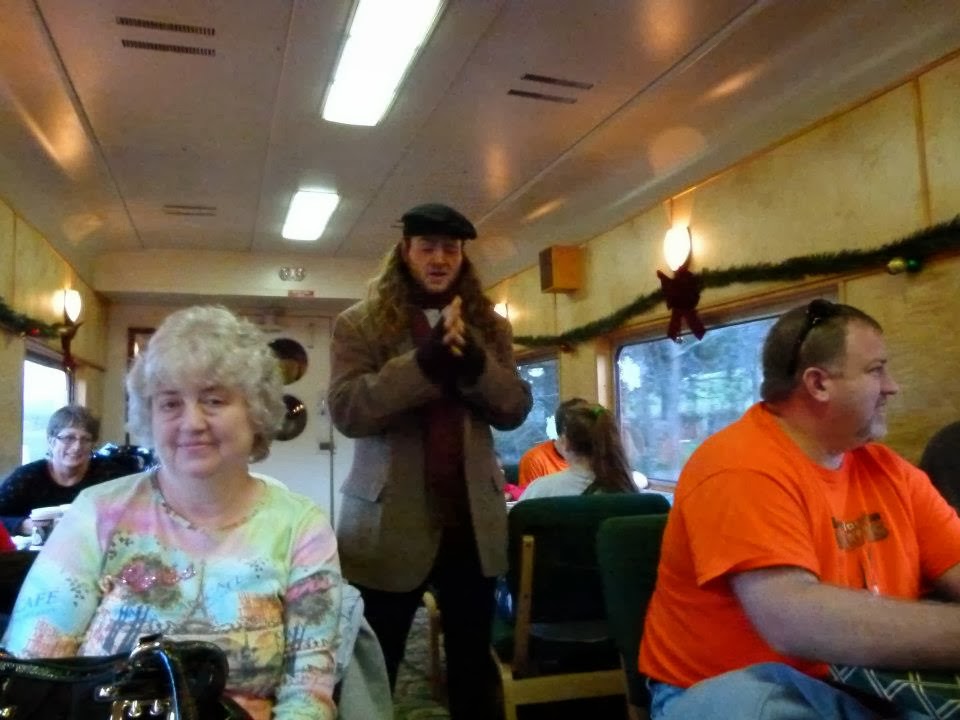 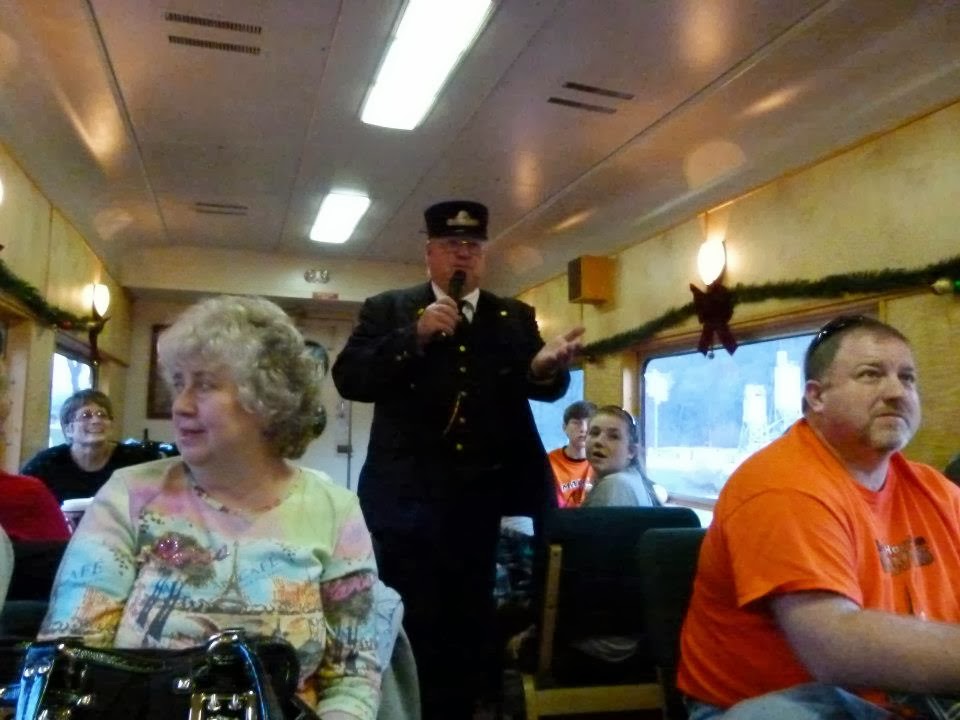 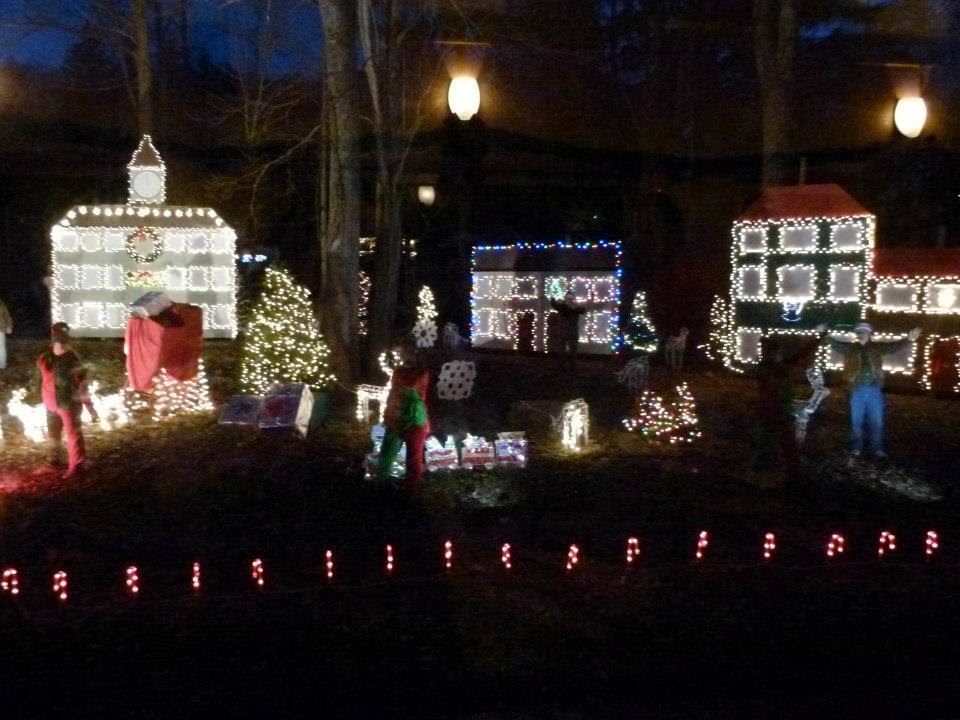 Out of nowhere, lights lite up the woods.  They had created the North Pole in the middle of the woods with buildings and thousands of lights.  Santa sat on his sled waving at the children.  There were lots of people dressed as elves standing beside him, waving at all the children on the train.  Santa boards the train and makes is way to each car and visits with each child.  He sits at the table and really talks to the kids, not in any rush to move on to the next one.  He then gifts each child with a bell from his sled.  This is the first gift of Christmas in the movie. 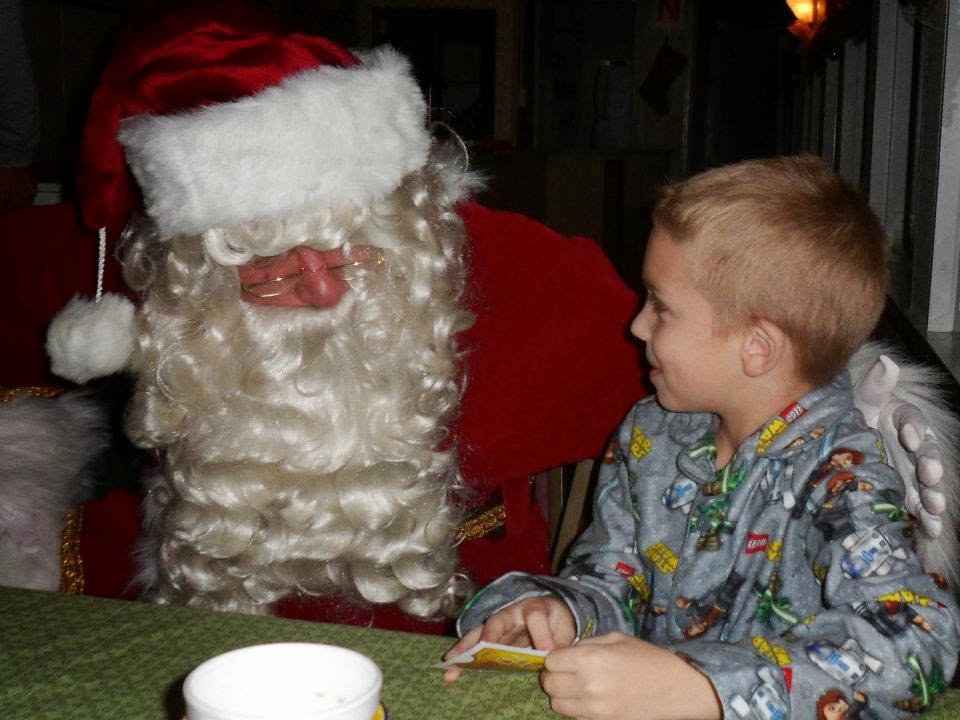 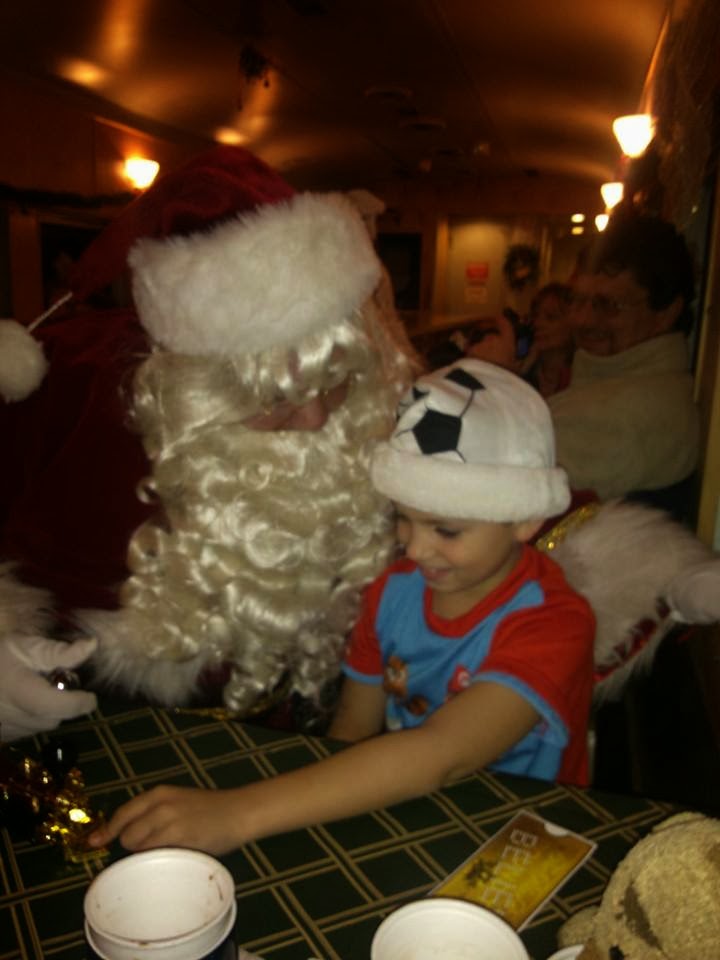 After Santa moves on to the next car, the Chef's, hobo and conductor are at it again, keeping the children entertained on the ride home.  One year we made fake snow and the children got to have a snowball fight on the train.  They also pass a stocking around and lets you pull something out which tells if you have been naught or nice.  The children and mom's all got nice but the dad's seemed to all get naughty.  The Chef's also had jokes to tell and puppets to play with.

The last two years, I've noticed a spike in ticket sales.  I've had to buy my tickets earlier and earlier each year.  I bought mine in June for November and they were almost sold out.  I guess the word has gotten out about what a great ride it is for the children and now everyone wants to do it.  I may have to start getting my tickets in January :-) 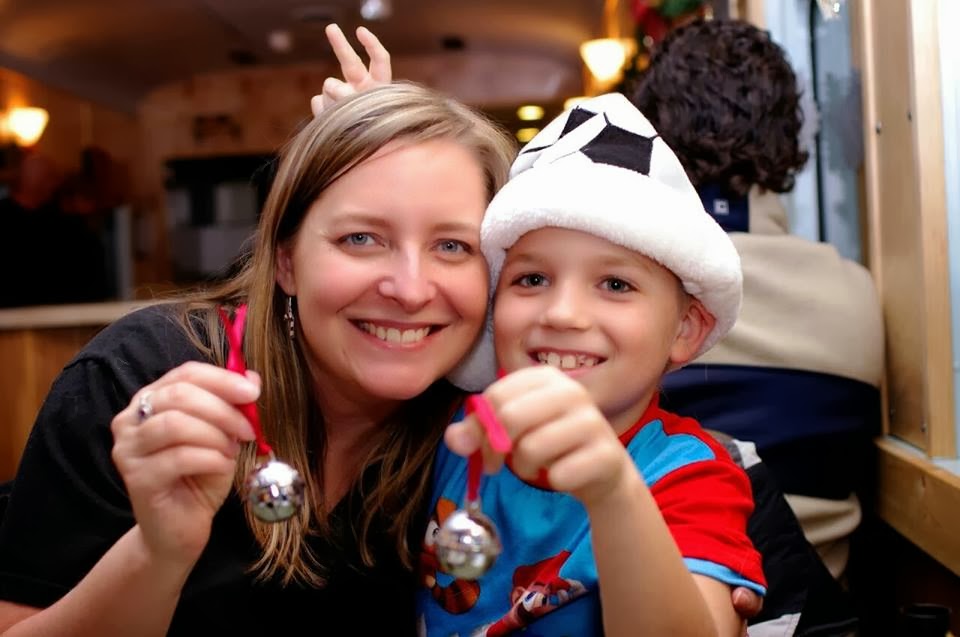