One year my office decided to have a Halloween decoration contest, floor vs. floor.  I have always loved Harry Potter so when I was asked to help plan something because of my creative side...Harry Potter won!  We just so happened to have an empty office across from my desk so I spent my lunches for a week creating the below master piece. 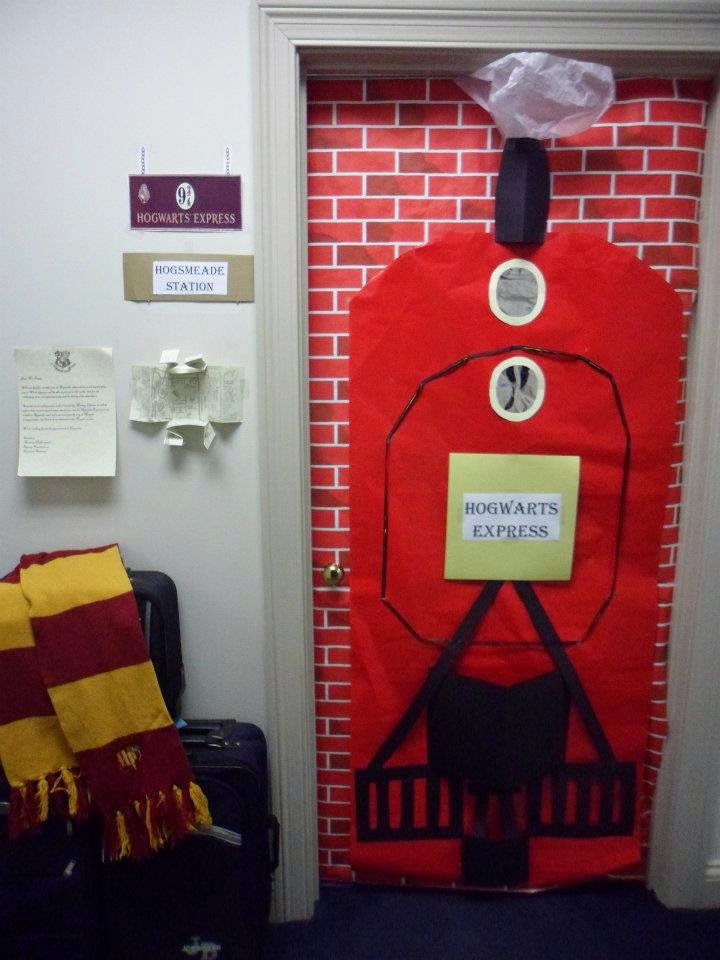 I used the door as my "train" and created it using brick wrapping paper for the background and plan red wrapping paper for the train.  I added the small touches of black and yellow to create the details.  I found the map and welcome letter online and printed on stone paper to give it the old look.  One year for Christmas my aunt bought the scarf for me and I had a few people bring in suitcases to finish the look.

Inside the office, I divided the room in half with one side was Hogwarts and the other was Hogsmeade.  Upon entering the room you were greeted as if you had just stepped into Hogwarts as a new student.  We were all dressed as witches and one was even Harry Potter. 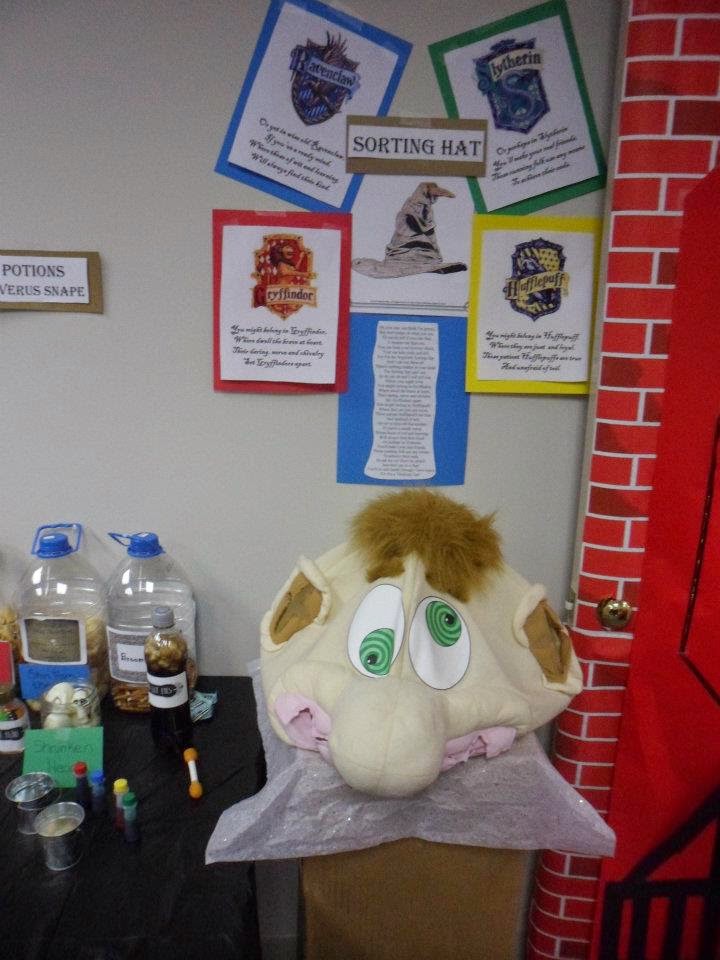 It was short notice so the only thing I could find to fit my sorting hat idea was the Head from the Ned's game my son had.  I cut up little pieces of paper for each house and had the staff stick their hands inside the head and pull one out.  They could then read what each house was like on the wall.  I also printed off the words the Sorting Hat sang in the books.  It was a lot of fun to see my bosses stick their hands inside Ned's nose and pull out different houses. 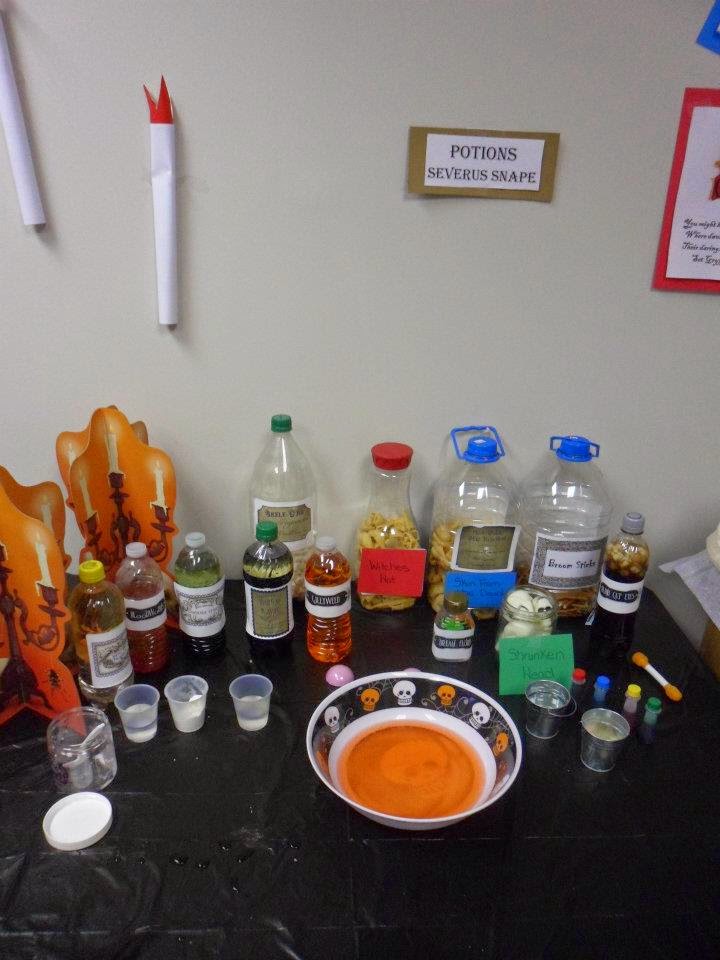 
The first class was potions. I collected every bottle I could find and made old tags to glue on the outside. I filled each bottle with crazy stuff to make it look spooky.  For this "class" I also had a bowl filled with food coloring, baking soda and vinegar to create the boiling effect. I left some of the baking soda and vinegar out so the staff could mix together and make their own boiling potion.
﻿ 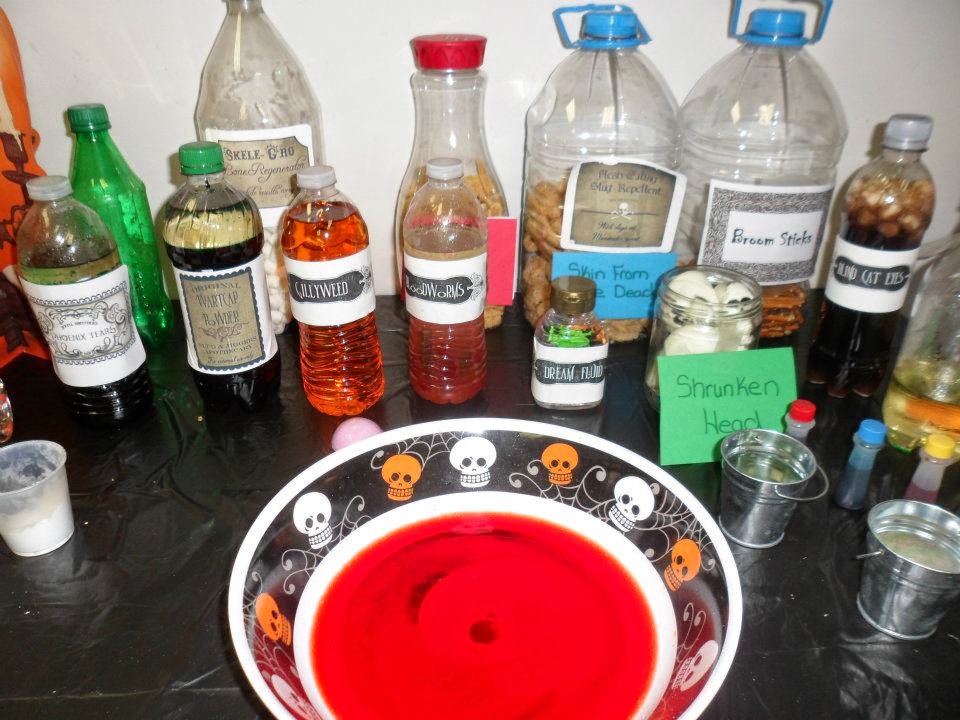 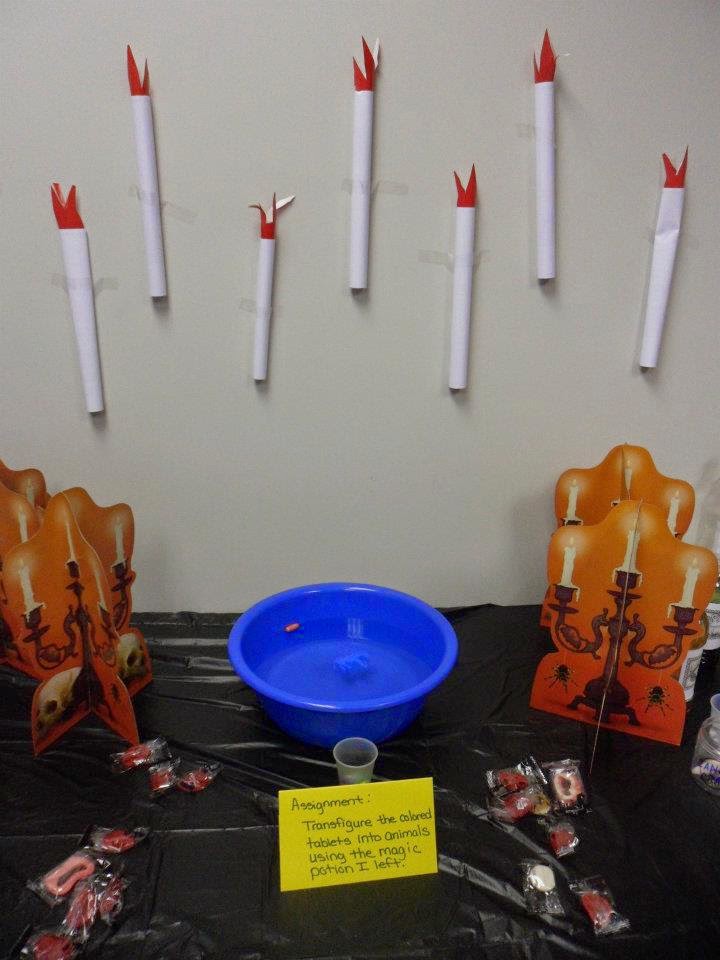 
For this class, I hit my local Dollar Tree store and grabbed some growing animal tablets.  I filled a bowl with hot water and had each staff pick a colored tablet and drop into the water.  They got to watch it "transfigure" into their animal. 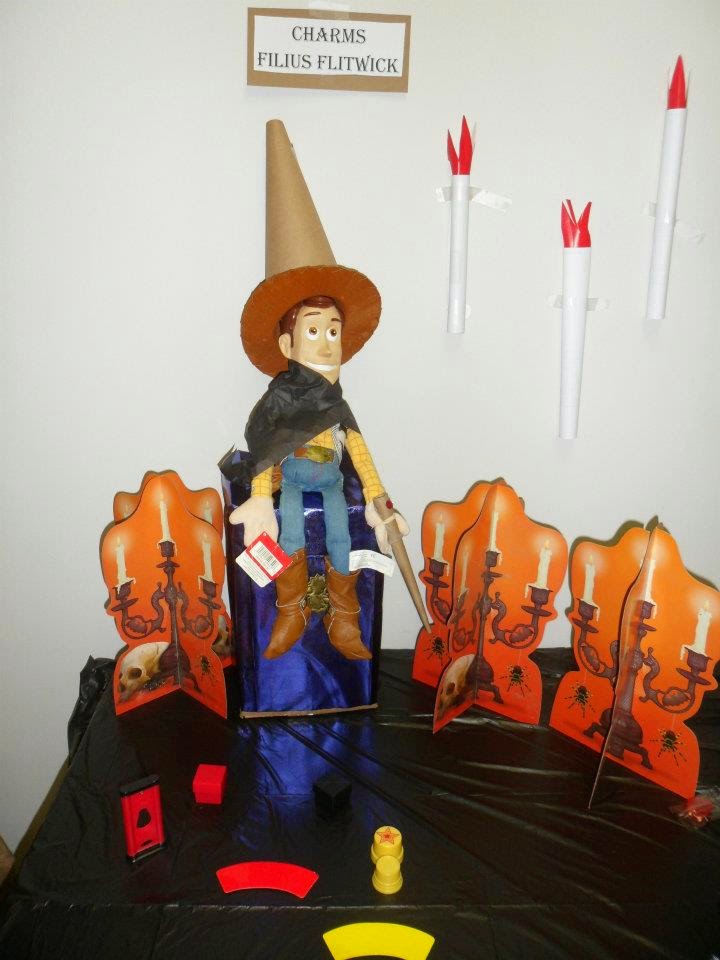 If you know me, then you know what a HUGE fan of Woody I am. He helped me out by becoming the charms teacher. The Dollar Tree had tons of magic tricks so I placed them around woody for everyone to try a charm trick for the rest of the class. 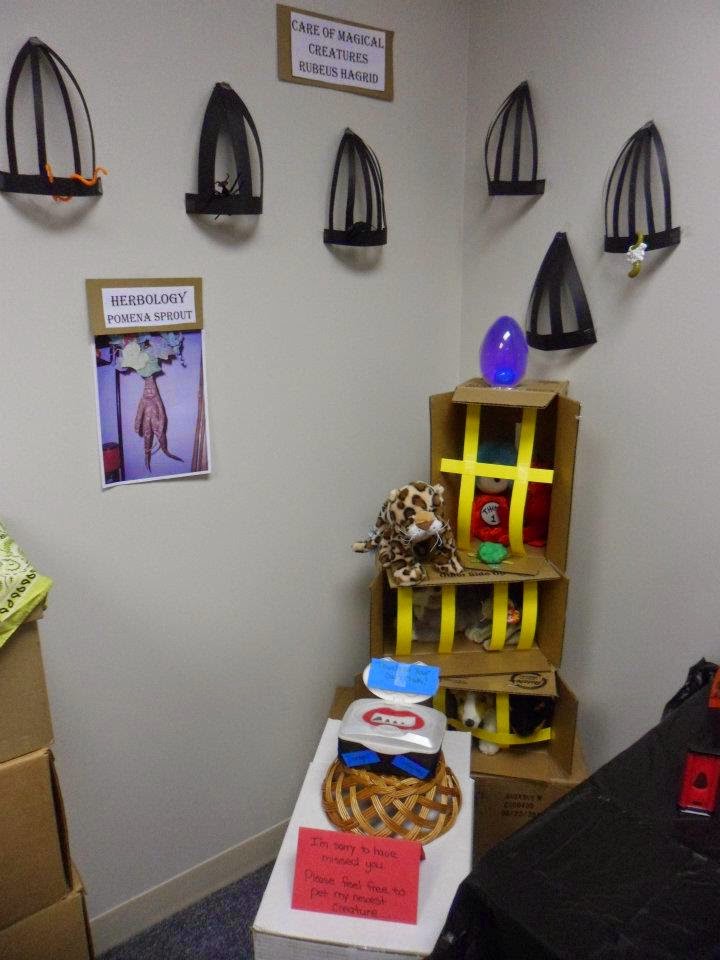 I used boxes and cut paper to make cages to hide the stuffed animals the girls brought in as our "creatures."  The cages on the wall is made out of paper as well and taped to the wall. I used an empty baby wipe container and made it look like a monsters mouth and filled it with gummy worms. The staff got to stick their fingers inside and try to figure out what creepy creature was hiding in there.
﻿ 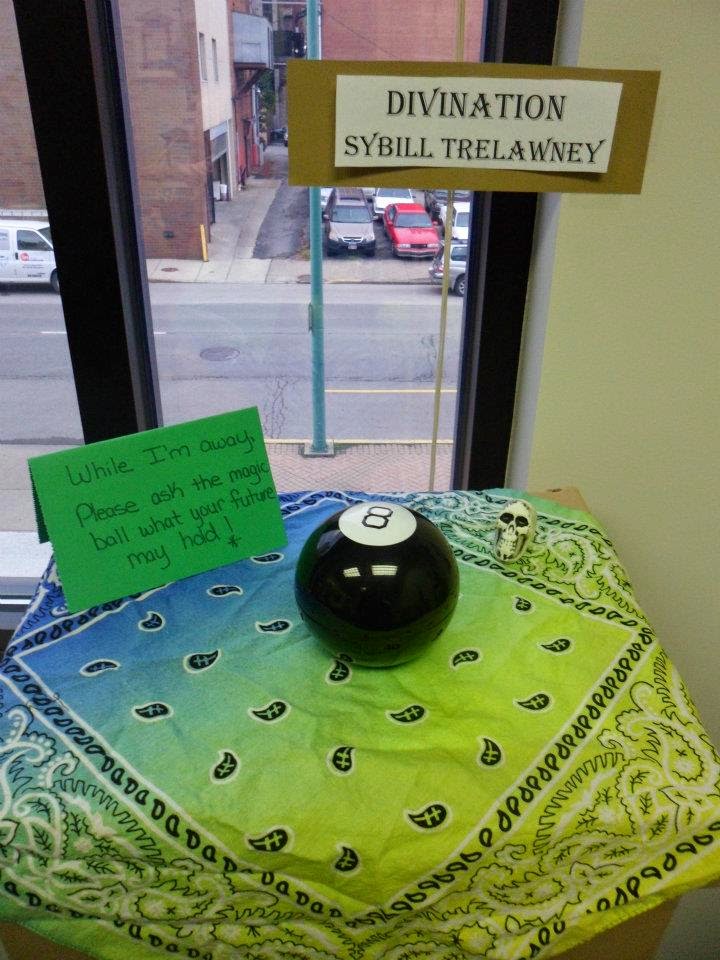 Professor Trelawney was away but she left the magic 8 ball to answer any questions the staff might have.  I think everyone had tons of fun with this old, but still a classic, toy.  So many questions were asked and answers given. 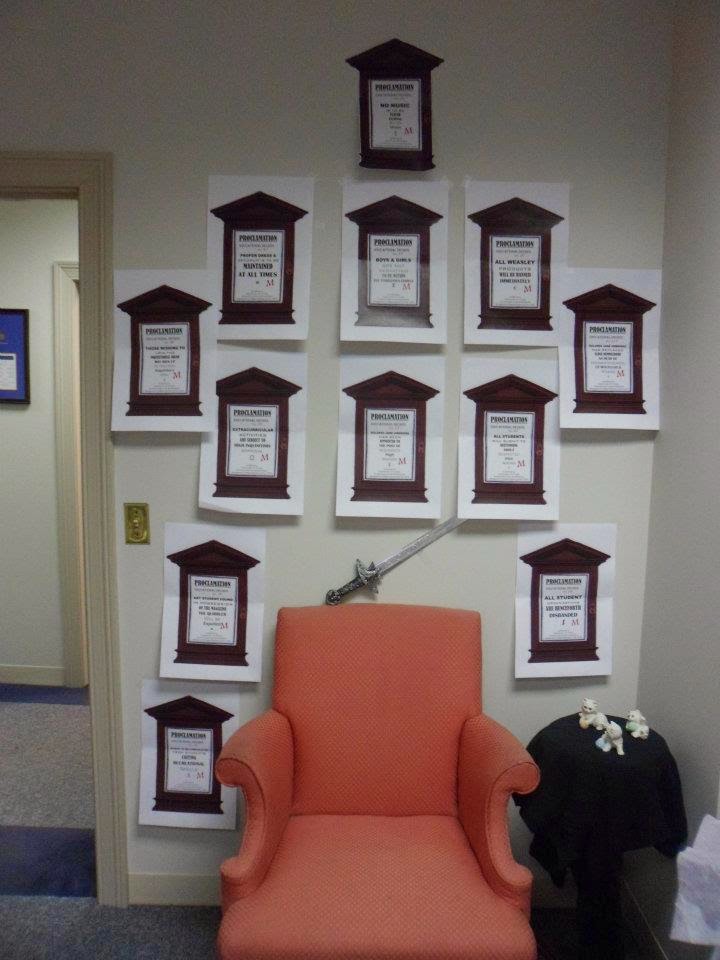 We were lucky to find a pink chair in one of the office's that I "borrowed" for the day.  One of the girls brought in all her cat figurines and I printed up the proclamations for the wall.  My son had a sword from his private costume so we used that as The Sword of Gryffindor.  One of the girls dressed in a pink suit and pretended to be the Professor.

On the other side of the room I was able to create what looked like store fronts out of large boxes. I cut out the bottoms and lined them on the table side by side. In each box I added tissue paper for curtains and used wrapping paper to create the inside of the store window. 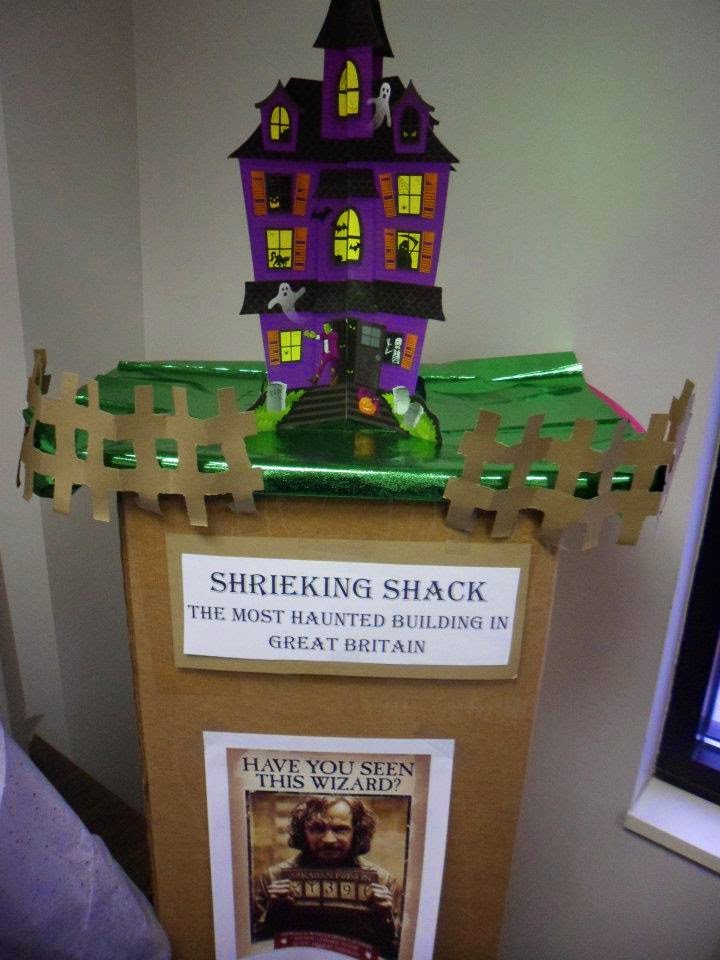 Shrieking Shack:
I just used a dollar store pop out table topper as the shrieking shack with an added wanted poster of Sirius Black printed off the internet. 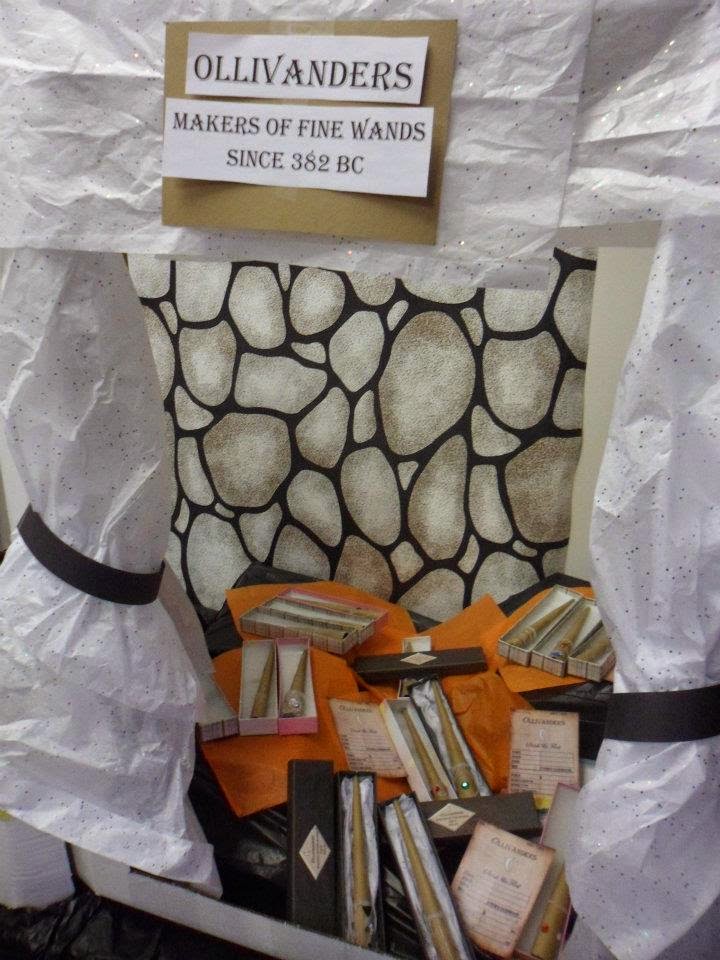 Ollivanders Wand Shop:
To make the wand boxes, I used pencil boxes I found for 10 cents each and wrapped them in black tissue paper.  I added a label I created to the top and also made an insert to tell you what each wand was made of.

To make the wands, I used brown card stock rolled up and glued together.  I took a hot glue gun and created the handle shape with decorative crystals I found in a package sold at Dollar Tree.  We also put a fan behind the curtain to blow the hair of the staff members when they picked up the "right" wand for them. 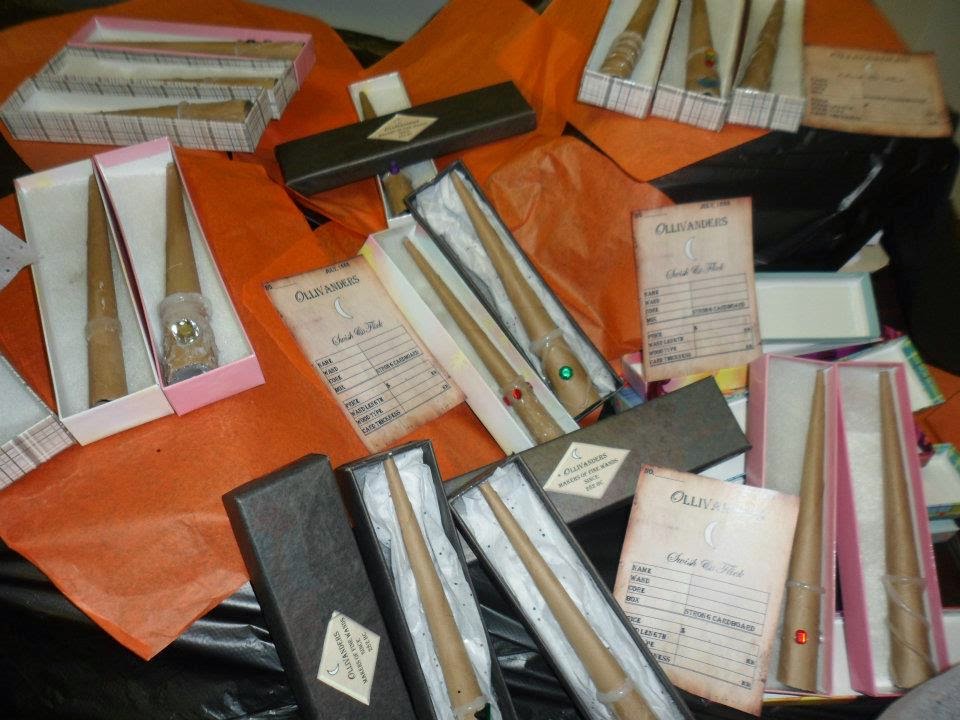 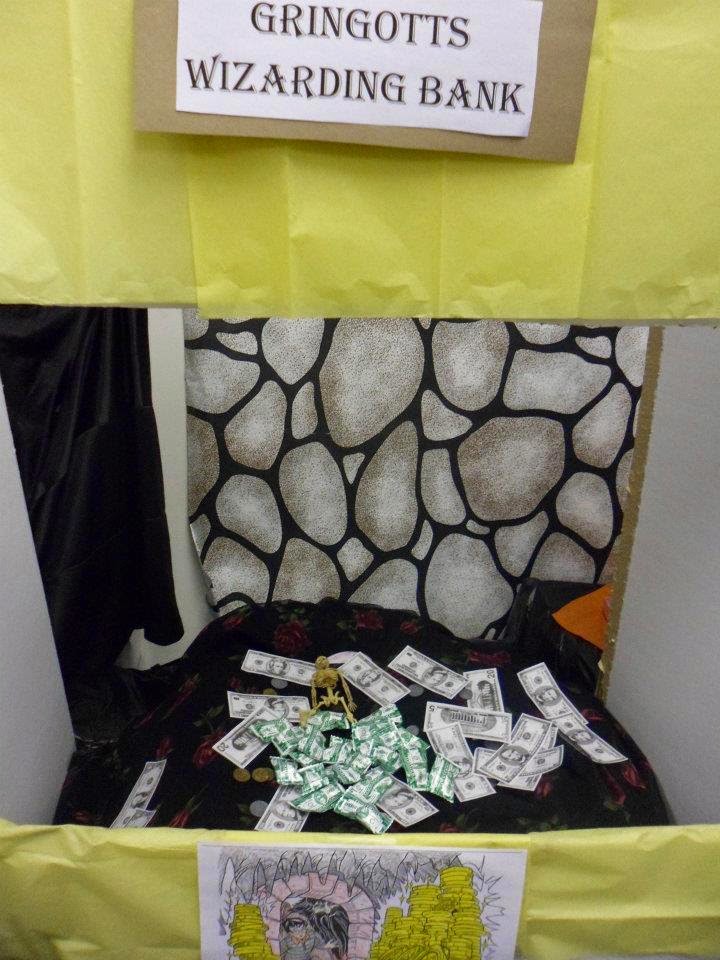 Gringotts Wizarding Bank:
What is a store without money to buy anything?  Gringotts was easy to make with mint candy and fake money also sold at Dollar Tree. 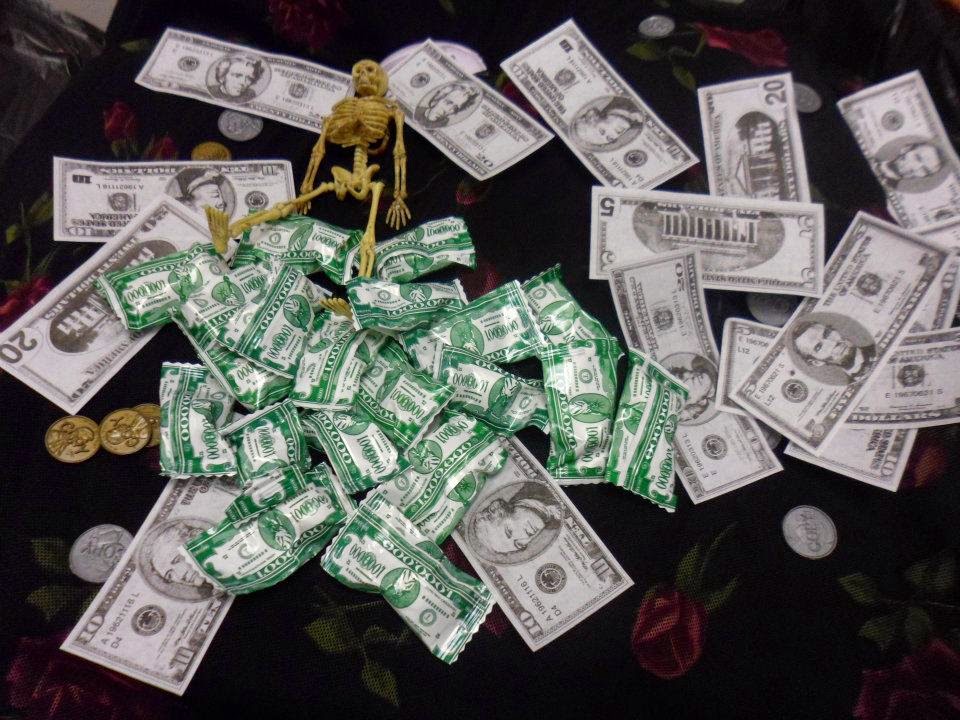 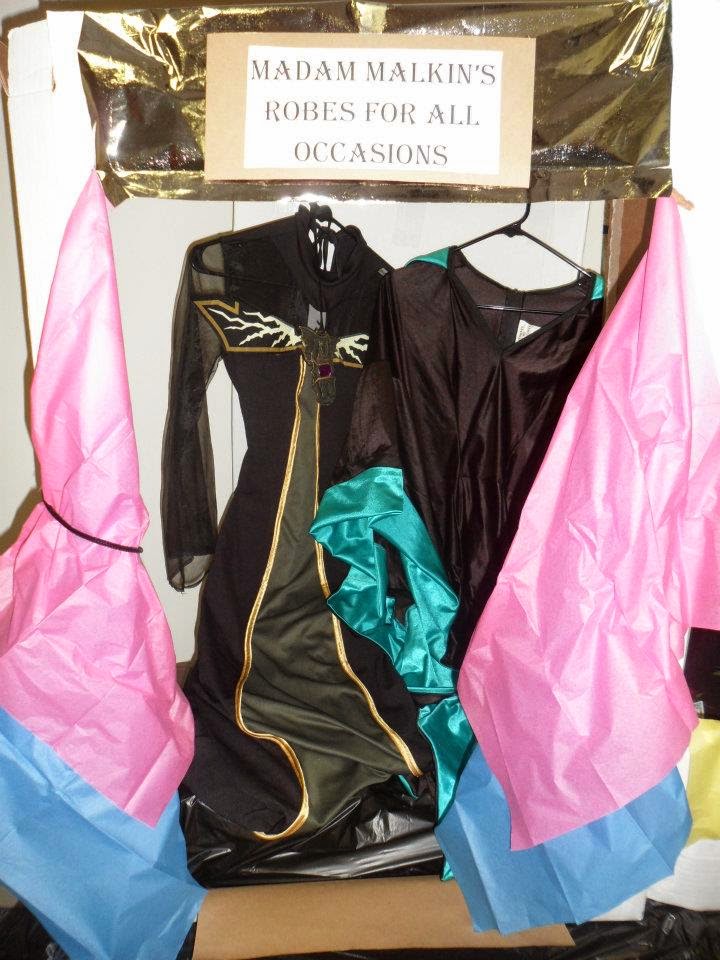 Madam Malkins Robe Shop:
I added some of my old witches costumes to create this shop. 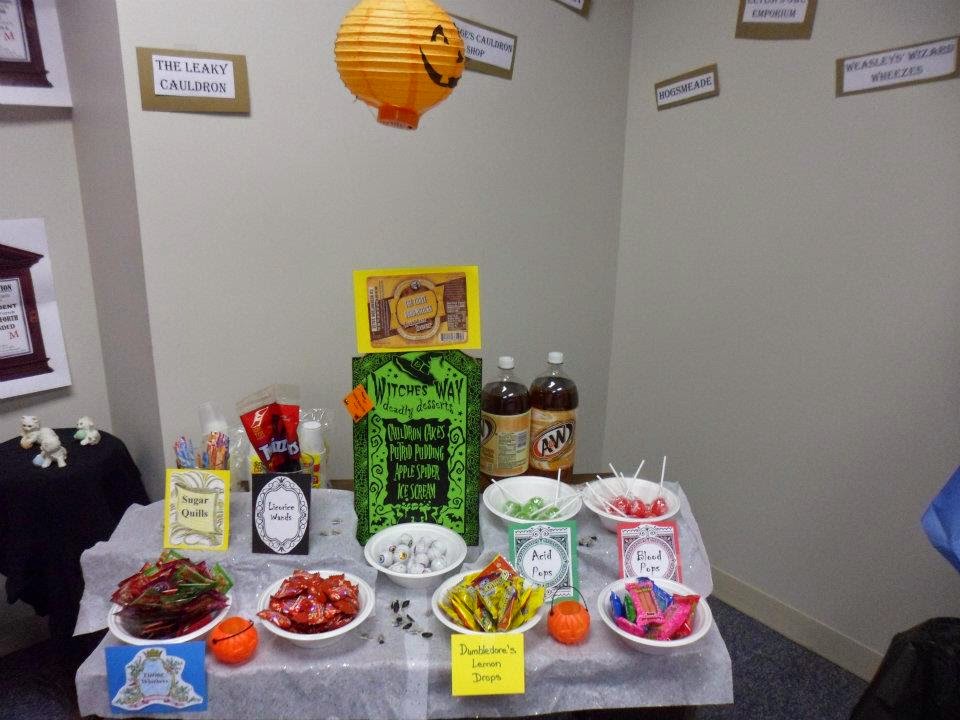 This station was the biggest hit of the party.  I had a table set up for the staff to "shop" for wizarding treats and made Butter Beer for each to take with them.

Most of the candy was also from Dollar Tree.  I made the Butter Beer with Cream Soda and butterscotch ice cream topper.
﻿ 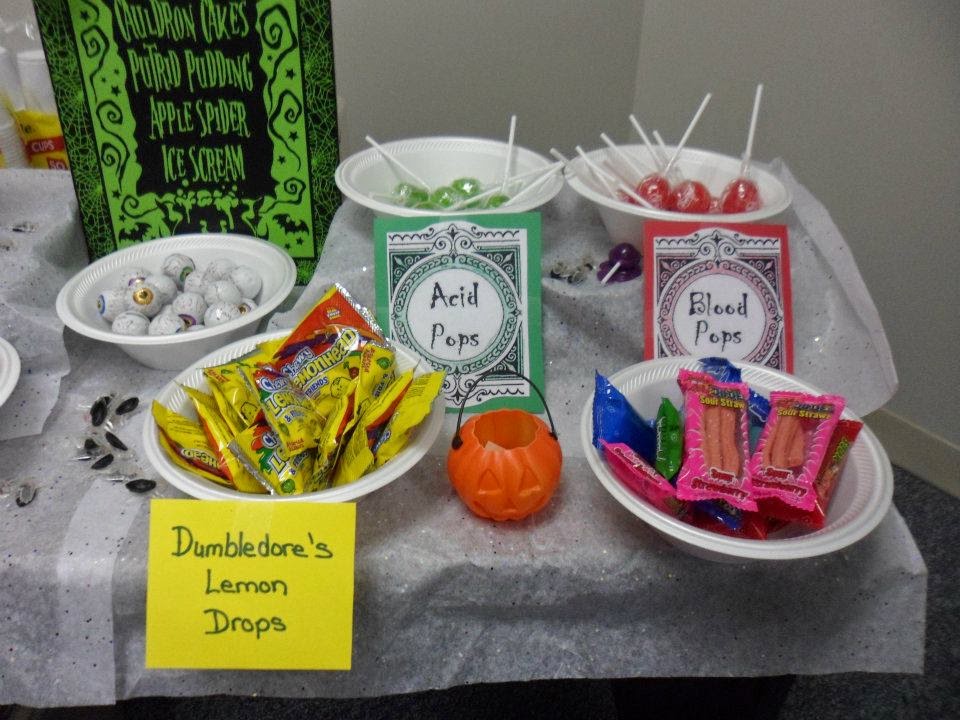 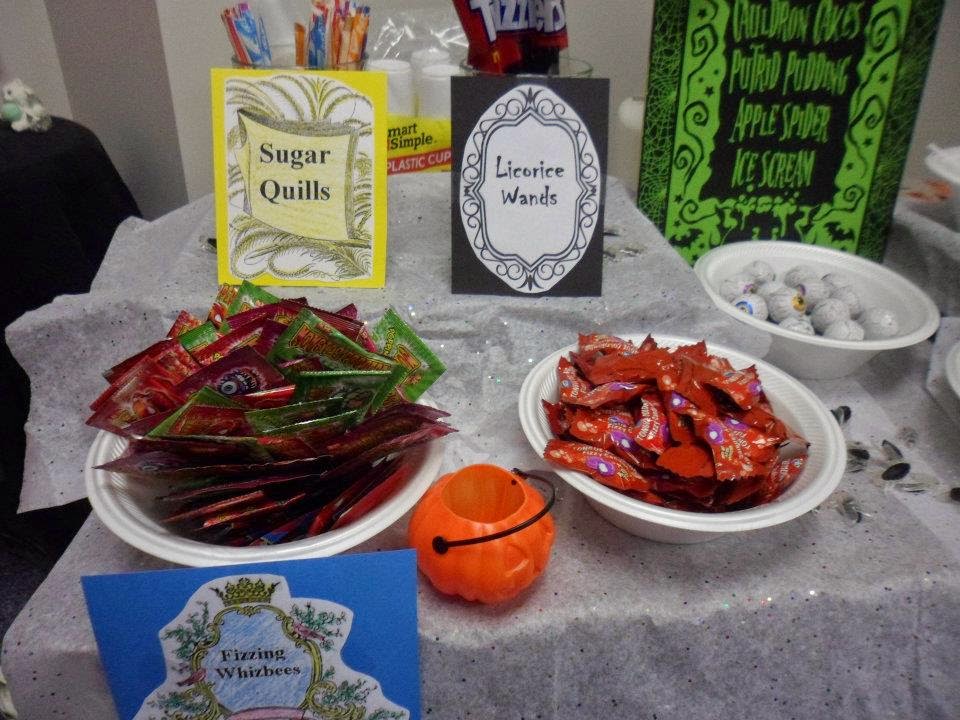 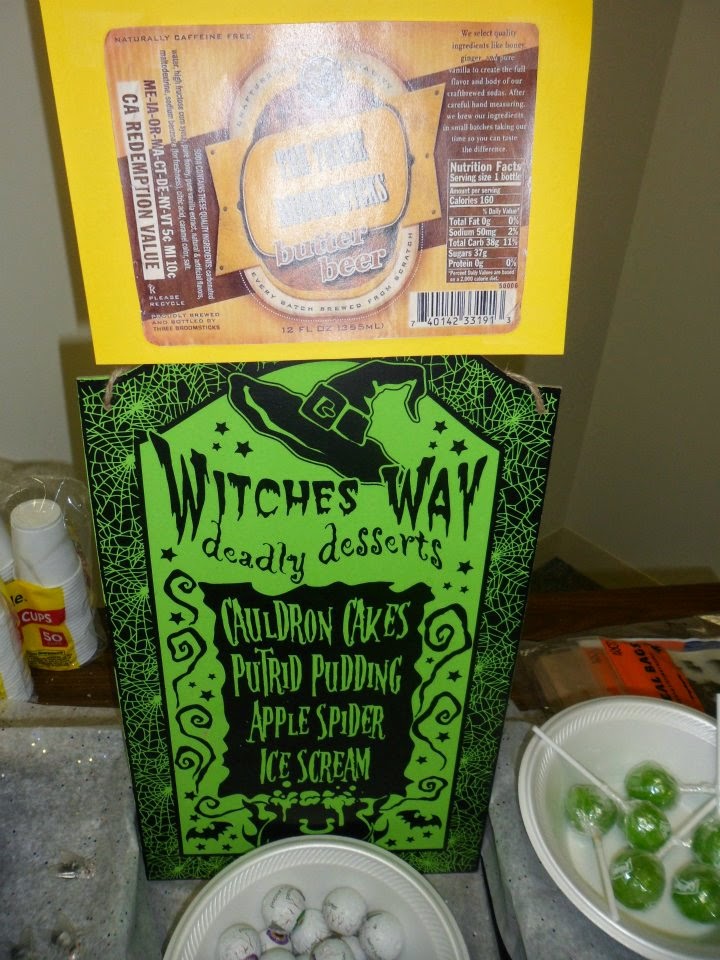 The party was a great success and my floor one first prize.  I had a blast planning and creating this Harry Potter party.  I hope you like my ideas and are able to use some of them for your own party in the future.