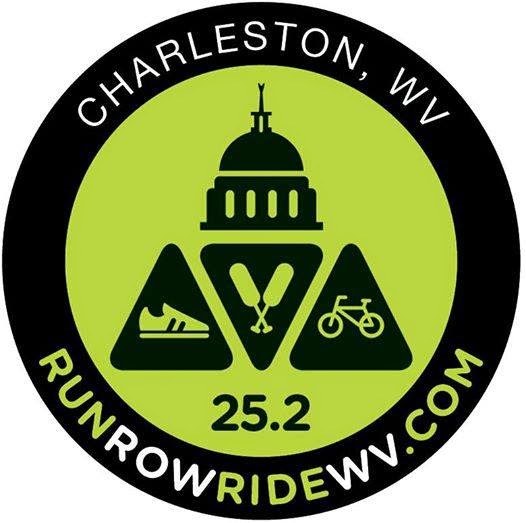 Since I moved back to West Virginia five years ago, I have been wanting to try this.  What a great way to try a mini triathlon?  In the past years, I've always had my son on race weekends but this year I made arrangements so I couldn't use that as an excuse.

Finding time for training was a little hard.  Being a single mother, finding a few free hours to run, boat or ride every day was almost impossible.  There was always a cub scout meeting, baseball practice/game, daily chores and fixing dinner...kid has to eat every day, right?  So I spent my lunch hour at the gym, squeezing in as much training as I could.  It didn't help that I came down with a cold a few weeks before this event and really lost a lot of time training.  And I am also still suffering from a bruised/broke (who knows other then it hurts!) tailbone from the Wild Warrior Challenge but I thought I could handle the 16.8 mile bike ride....little did I know.

The day before the event, I was really nervous.  My stomach felt sick and I had to force myself to eat because I knew I needed lots of carbs.  I went into the race with the mind set...JUST FINISH.  I didn't care what place I was in, I just wanted to be able to cross that finish line without giving up.  Giving up isn't in my vocabulary (Navy Strong and all that Jazz).  I knew I would drag my butt over the finish line and nothing would stop me. 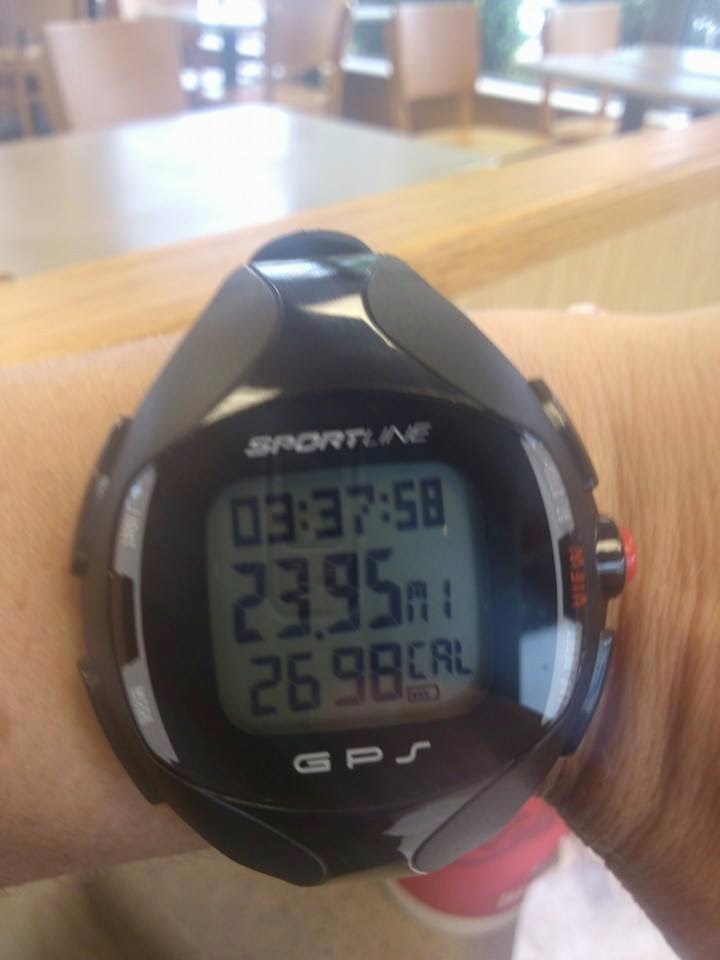 In prep for the event, I purchased a few new items.  I've never really tracked my miles or time before but I always see other athletes wearing this fancy GPS watches or carrying their phones with GPS apps on them.  I looked into purchasing one but after seeing the price of some...I changed my mind.  And I really don't like apps on my phone so that option was out as well.  Last week I was shopping at my local Wal-Mart and came across the Sportline Cardio GPS watch.  It was priced at $80 and I still couldn't see paying that much for a watch to train with so I walked away but the watch kept calling my name.  The day before the event, I went back to Wal-Mart and found this watch marked down to $60 and there was only one left.  I told myself it was waiting for me so I bought it.  It was simple to set up and worked amazingly.  The only thing I didn't like was the size of it.  This sucker was HUGE.  I had to put the band on the very last setting and it was still moving around on my arm.
It may not be 100% right since the race is supposed to be 25.2 miles and at the end it showed 23.95 miles but I think they did change the course a little so it may have cut the miles down some.  I will have to test it at my next race.  I did love seeing my time and how many calories I burned.  You can change it to tell you different things but these three were the ones I was looking for most.

My friend also let me use his extra pair of toe socks.  I've never wore them but I kept getting blisters on my middle toes while running and he said that these would stop that.  Sure enough, I didn't have one blister on my feet after completing the full race.  I LOVE them and he will not be getting these socks back (with his permission).  Before I put them on, I also put Vaseline between my toes to give them that extra cushion so they wouldn't rub against anything.  Laugh if you must because I sure did when I read I should be doing this for long runs.  I kept seeing Burt Reynolds swimming in vaseline in the movie Striptease.

I also bought a new mountain bike.  Since I really knew nothing about street riding, I didn't think much about the bike.  I do love mountain biking and didn't want to purchase a bike that I would only be using for a race and thought....a bike is a bike...right?  WRONG!!!  Don't fall for this and step away from the mountain bikes.  My friend said I could use his street bike since we are about the same size and weight but I blew it off with an "I will be fine.  It's only 16.8 miles."  Yes, I was stupid and more on this a little later.

The night before, I packed my kayak and bike on the car and laid everything out I would need for each part of the race.  Run stuff in one pile, kayaking stuff in another and bike last.

Running
Kayaking
Biking
I also packed a cooler full of water and snacks for afterwards.  I learned my lesson from the Quarter Marathon when they ran out of water and I almost drank from the local stream because I was so thirsty.

The morning of the race, I got up about 5:30 am and it was pouring rain.  Not to let that get me down, I got dressed, ate a banana and drank a glass of water before leaving.  Dropping my kayak off was the first step and there was already tons of people there, in the rain, unloading their boats.  It's first come first serve as how close you get to the water.  I had a pretty nice spot not to far away.  After that, I made my way to the starting line and drop off spot for the bike.  The parking lot was under a bridge which made for some protection from the rain as I got the bike off the car and gathered everything to go.

Riding the bike to the drop off spot, I started to doubt myself because my tailbone was already showing signs of pain.  But I blew it off, downed a few Advil and told myself not to use that as an excuse and to suck it up cause it was only 16 miles! 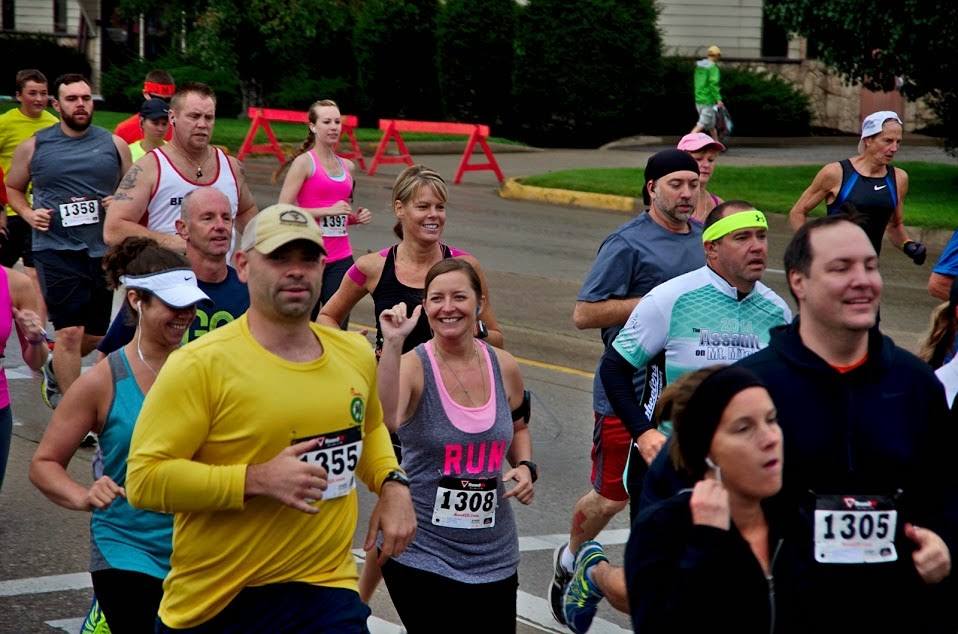 Rain was still coming down but not to bad.  I met up with some gym and co-workers and listened to them tell me stories of the previous years.  Nerves were getting worse and I started to worry about the bike part more. Before I knew it we were lining up and the count down had started.  We were off before I even knew what happened to the extra hour I had when I got there.  My friend brought my son down so he could see me run and they both snapped a few pictures of the start.  I was waving to my kiddo as he had his video camera attached his head. 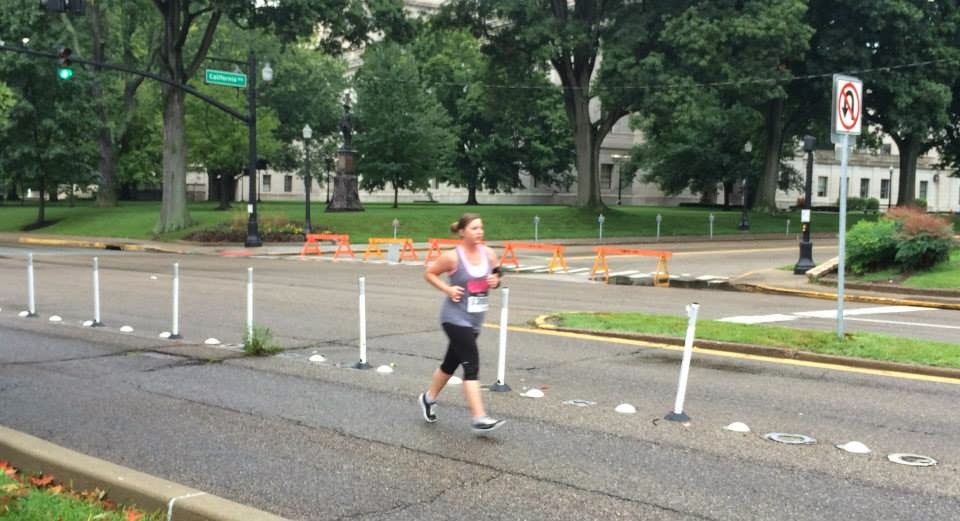 I felt pretty good during the running part.  I kept a good pace (for me) and just enjoyed the miles without stressing to go faster.  I knew there wasn't any way I could keep up with these athletes who do these races all the time.  Nobody was walking like the 5k races!  I'm always slow to start and then able to speed up around the second mile.  I was even able to pass a few people which did put a little peep in my step. 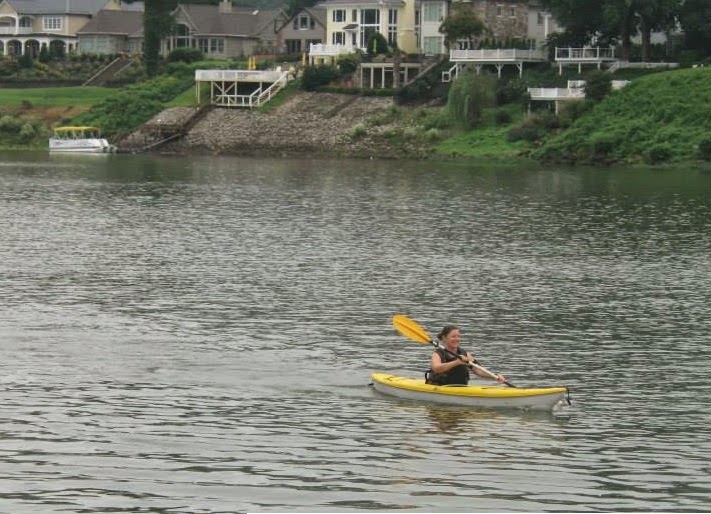 By the time I got to the kayaks, there was still close to 30 boats waiting.  I felt pretty good about this as well and got my boat in fast and took off.  Kayaking is my thing and I love the water.  I hoped to be able to play catch up in this section.  And to some degree, I did.  Half way there I remembered that I forgot to put my gloves on but refused to stop to get them.  Thanks to this, I ended up with some nice size blisters on my thumbs.  But I didn't care.  It was a blast playing on the water.  I did, however, slow down to talk to a few people.  There was a guy from the Coast Guard and we talked for maybe a mile before I remembered I was in a race!  I started speeding up then.  There was also this other guy that was in a whitewater kayak and was having issues getting the boat to go left.  Every time he tried to paddle it would turn him right...into the rocks.  I hung back with him for a few just talking smack before I dug in to finish the section. 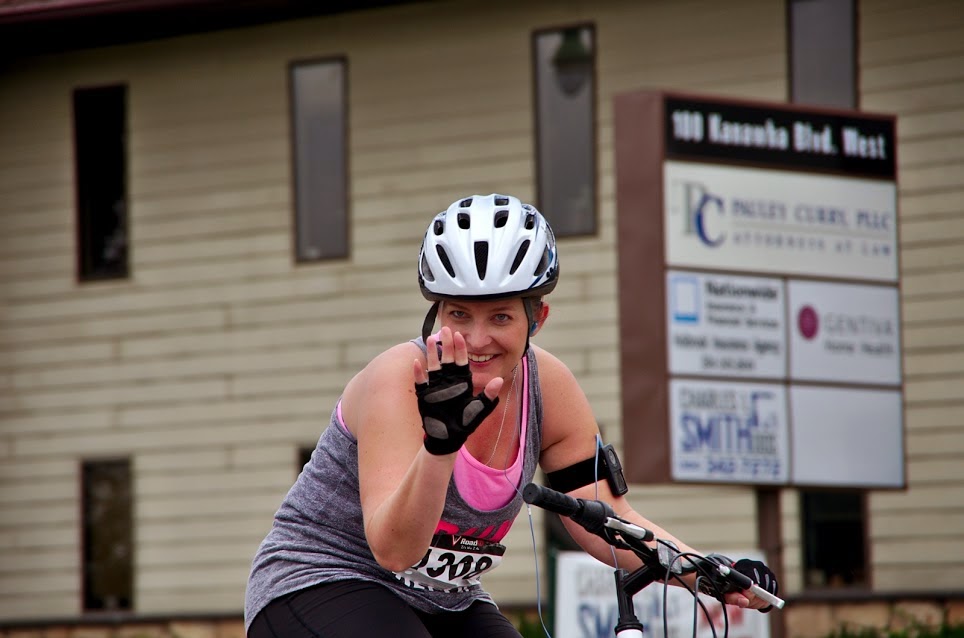 The bike section was left and I was still feeling pretty good at this point.  I ran up the hill and grabbed my bike. Put my helmet on and also remembered the gloves.  Off I went with the Coast Guard guy right in front of me.  He had caught up to me as I was getting out of the water.  The bike section was a pain in the ass...literally.  After the first few miles, the pain was horrible but I sucked it up and continued on.  The faster I peddled the slower I seemed to be going.  People were passing me left and right and I had no idea why.  Of course I was on my mountain bike and they were on street bikes....there is a difference people!!!!  I made it through the first round but could already see the people disappearing as I was making my second trip.  It was really nice to hear everyone cheering me on as they passed me though and gave me the will to keep fighting.

By the time I made it to the 12th mile, I was numb.  I couldn't even feel from the waist down and tried to stand to take pressure off my tailbone but couldn't.  The pain was worse every time I tried to change position.  So I stayed in the same position for the last four miles and only kept going by my will to not give up.  A police car started following me, slowly moving with me as I made my way, painfully to the finish line.  It was rather creepy and made me feel like a criminal.  I will not lie but I did almost give up but I remembered how far I came and only had a few more stupid, very long, very painful, miles to go.  I slowly and very painfully made it one mile at a time.  I'm sure the cops were saying, "Can't you go any faster" but what they didn't know was that I really have no idea how I kept going.  The pain was worse then when I first got the injury. 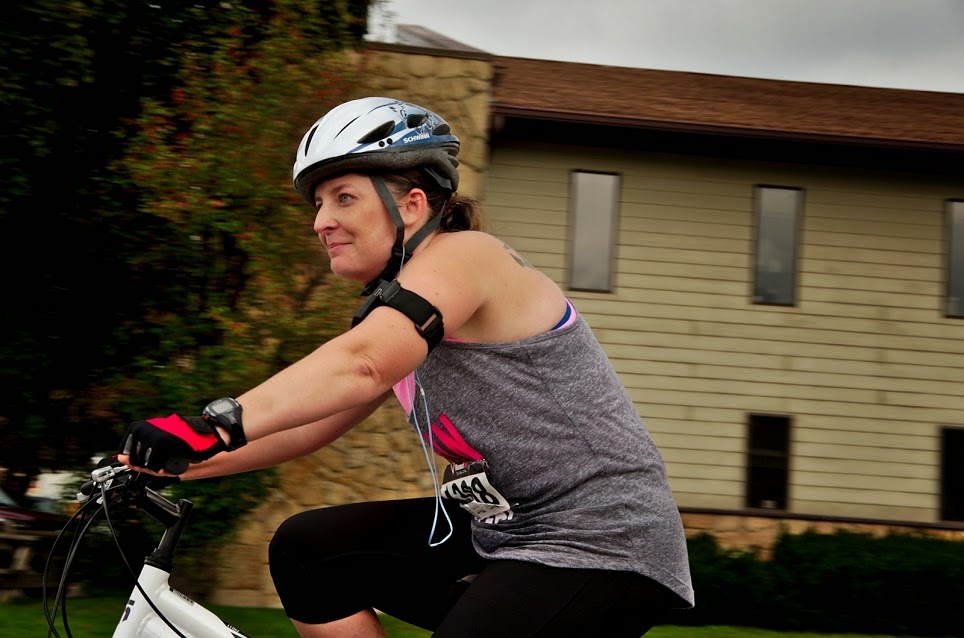 As I climbed the last hill, knowing the finish line was within sight, I almost cried like a baby.  The smile on my sons face was the first thing I saw as I crossed that finish line.  I sent a prayer thanking God for the hand on my shoulder and gladly crawled off the bike and to the nearest grassy hill, stretching out on my side and drank some water while I waited for pain to stop.

My friend looked at my bike and told me the tires were almost flat.  Now I know why it felt like I was riding through mud and people were passing me like crazy.  I came close to tossing the bike into the river but changed my mind.  It IS a mountain bike and I liked how it rides.  I will be looking into a new street bike though.

With the help of a friend, I was able to get all my stuff packed up and headed home.  My son asked me what took so long and I just laughed thinking to myself, it almost beat me but I knew I would have crawled across that finish line if I had to.

I may have came in last place but there is only one place I can go from there.....up.