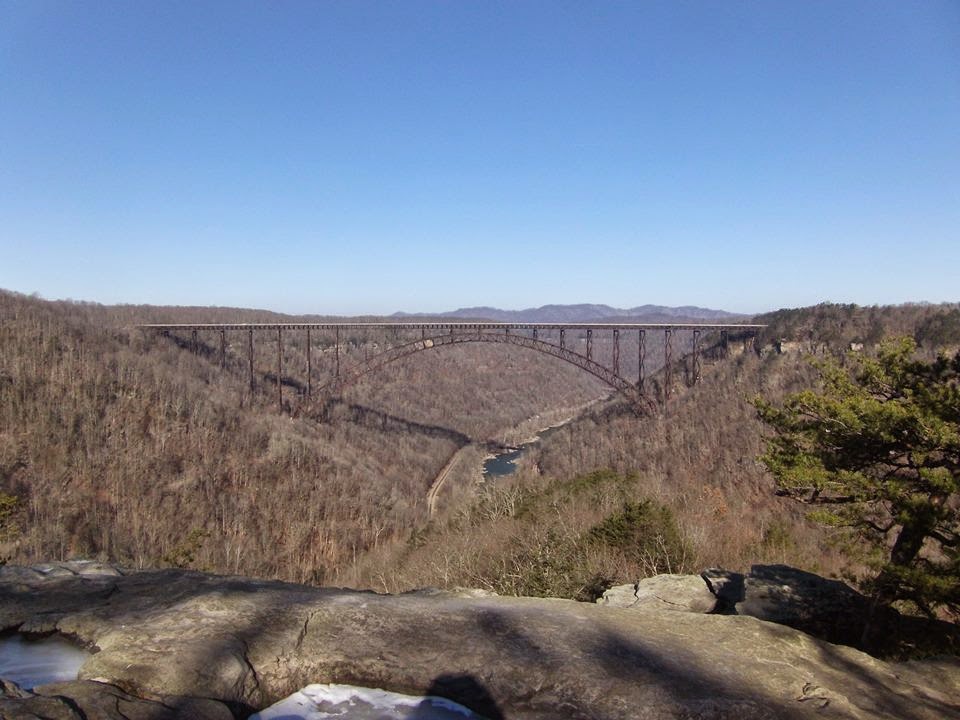 Over the weekend, a group of us decided to brave the 20 degree weather and take a hike along the Long Point Trail which is located in the beautiful city of Fayetteville, West Virginia.  This is not an easy trail to find but it is well worth the getting lost on back roads getting there.  It is also a long drive from my home but I still got up early and made the trip just so I could experience this amazing view the group kept talking about. 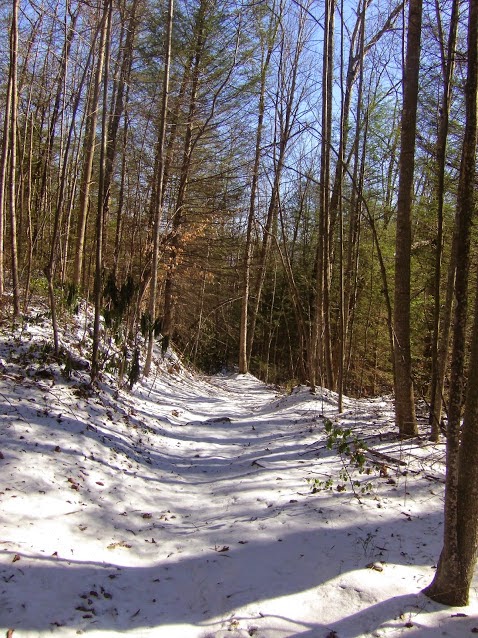 A nice blanket of snow greeted us at the start and I have to admit that I love being the first one to walk down a path, leaving my footprints "in the sand."  The sun was bright and helped warm us up the further we ventured into the unknown...well, unknown to me.  Joe, one of the guys with us, knew the path pretty well so we just followed his lead. 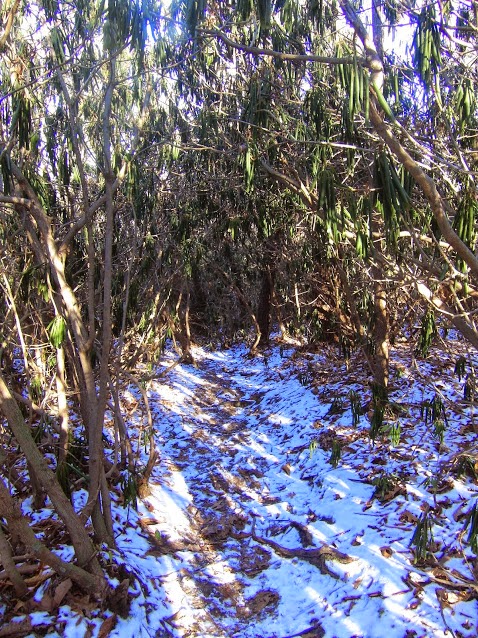 After a little over a mile we started making our way down the hill on a path covered with tree branches, making it look like a secret tunnel.  Of course, I think I was the only one that thought this but I do have a wonderful imagination and it was pretty cool.  I will admit that I'm glad it wasn't summer time and I wasn't fighting the spiderwebs I'm sure are hanging down from these baby's just waiting to catch dinner.  ﻿ 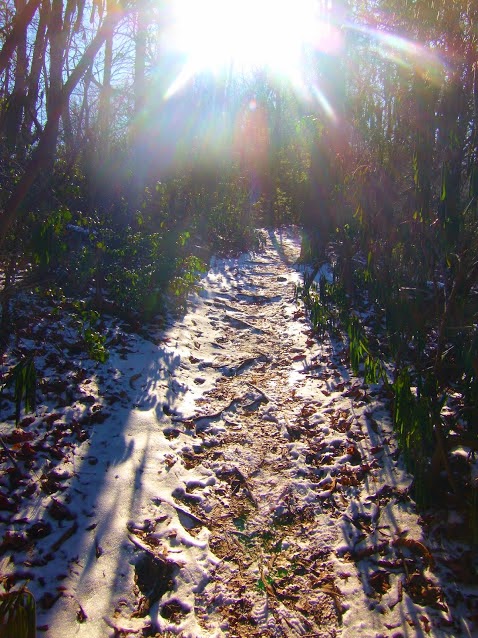 We were so high in the mountains that the sun was just reaching the trees and was leading us to something amazing. 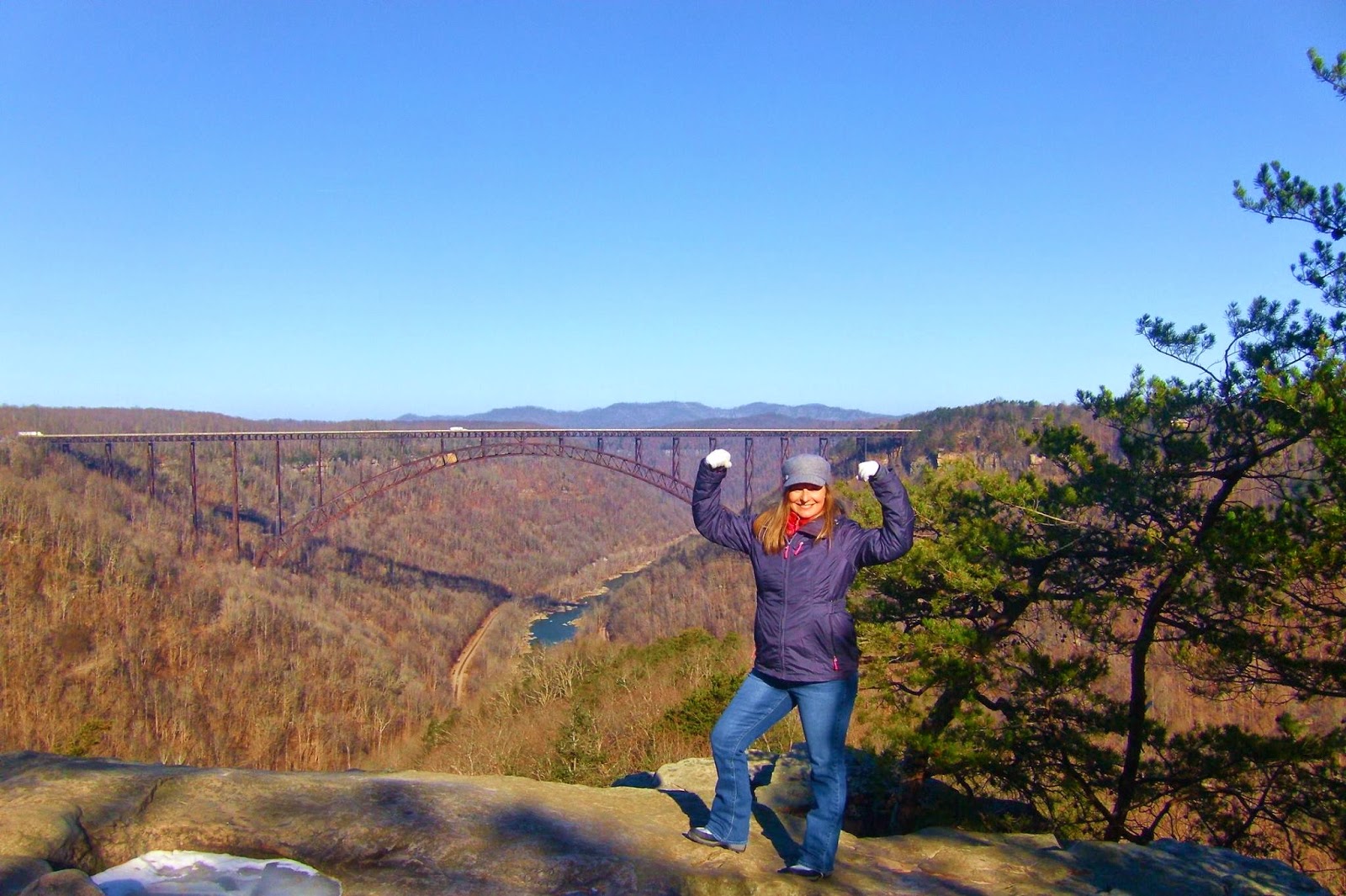 And there she is...the New River Gorge Bridge.  I'm celebrating a little cause I have a fear of heights and I'm REALLY close to the edge of that drop off.  You can't tell but there is another smaller rock behind me that everyone was trying to get me to get on and take a picture...not happening.  I was there long enough for a picture and right back to a safer distance. ﻿ 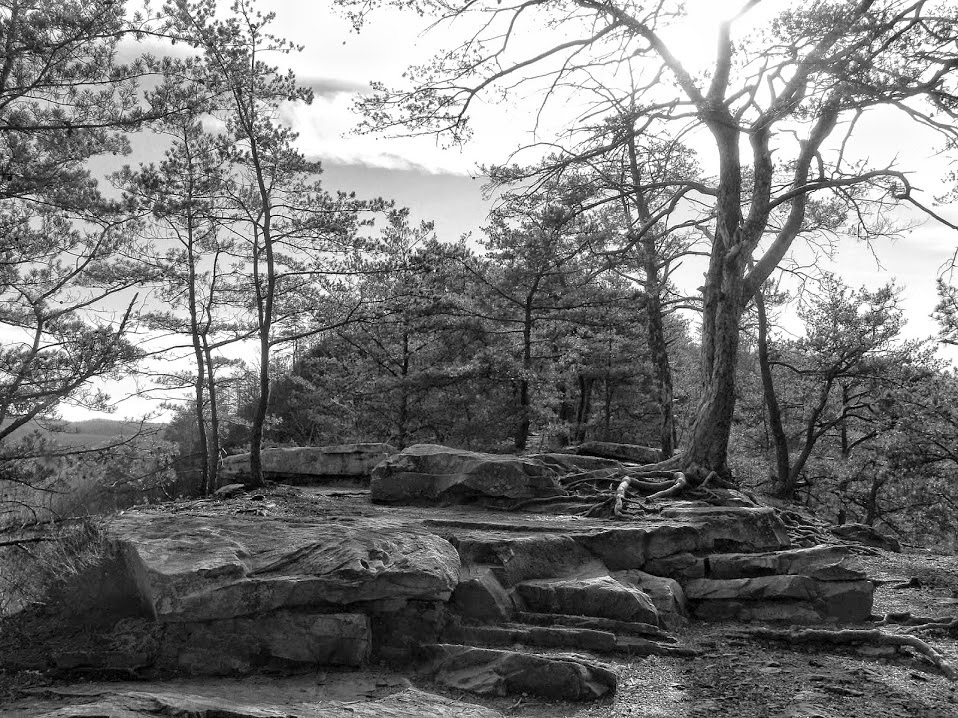 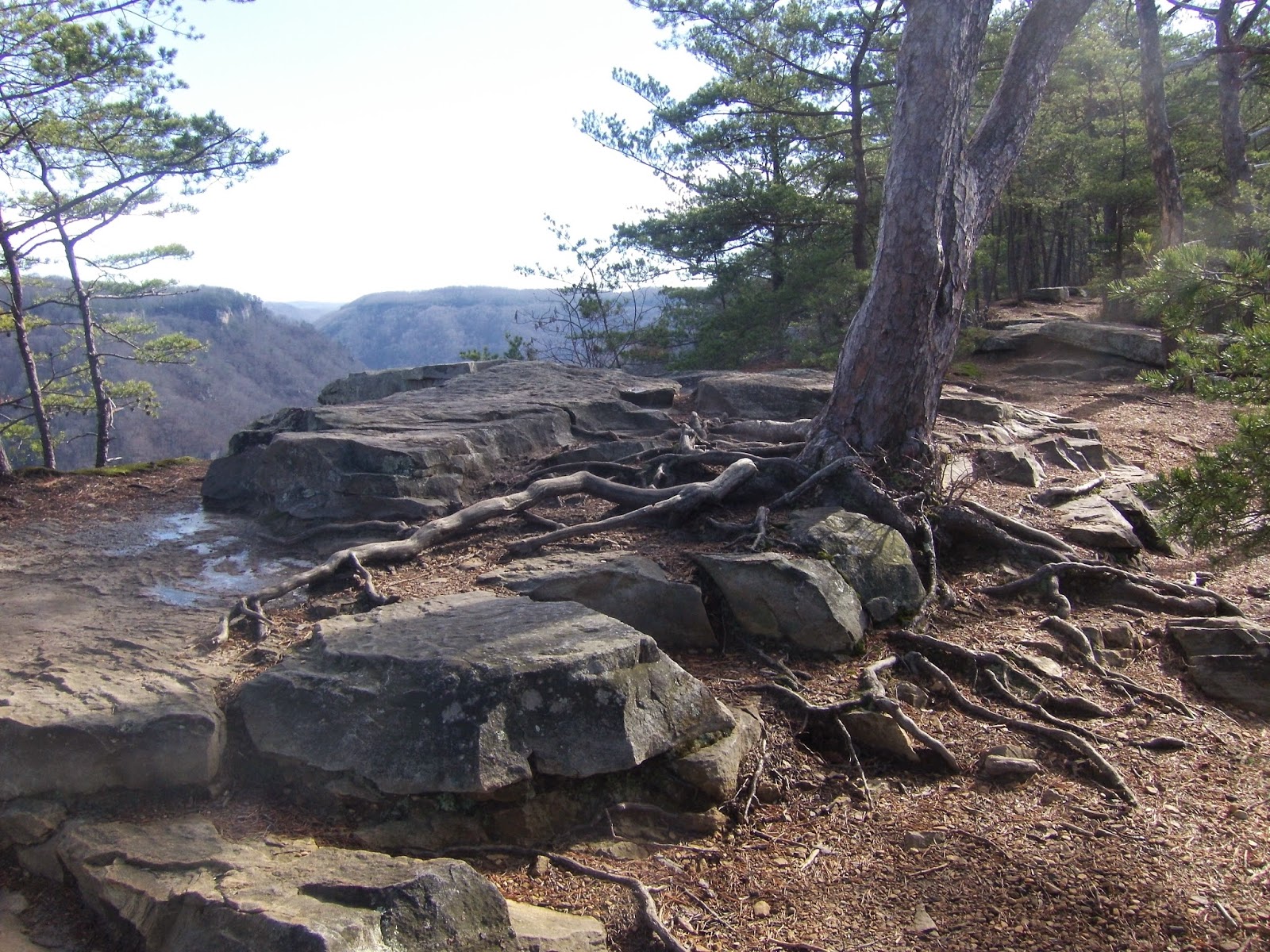 We decided to take a longer path back, which had us winding up and down the mountain, jumping over streams, crawling through mud caves (OK, I made that up).  It was freezing a little in the shade from the trees but the up and down the path took us kept the body temp up.  There is no "path" to get to the above view.  Joe, lets call him our guide at this point, just happened to know where to turn and which tree branch to duck under.  Fighting trees and bushes, smacking each other with branches as we went.  I was starting to think Joe was leading us to his hidden cave.  I was kicking myself for leaving my knife in the car when out popped this little guy from behind a tree asking us if we were there to see the view.  I relaxed enough to start following his footsteps to this cliff overlooking the New River and just making out the bridge in the background. 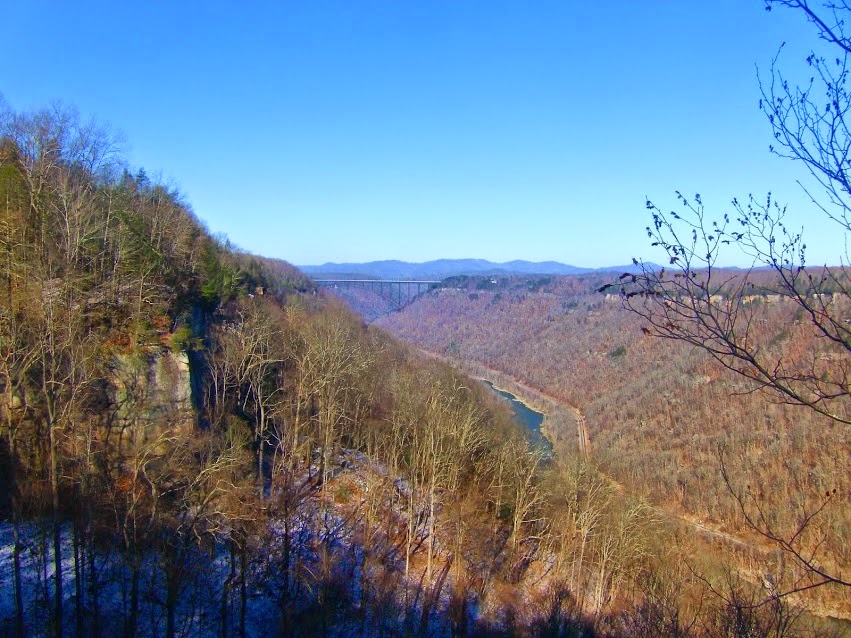 This hidden path can be found on the same trail leading to the Kaymoor Top Trail head.  We hiked a little ways down and ran across some guys ice climbing before decided the rocks were to slippery to continue to the top of the 800+ steps down leading to the ruins of the town of Kymoor and its mine.  We took a different path out and ended up doing a large circle back to our cars. 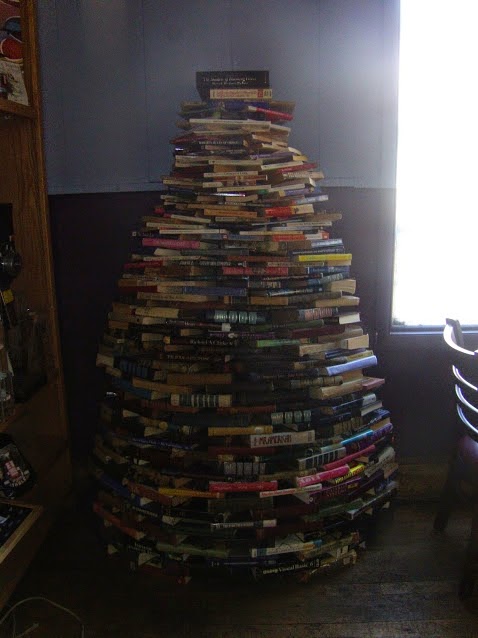 Before heading home, we decided to stop off in the town of Fayetteville and grab something to eat at the Cathedral Cafe.  The food was good but I was distracted by all the little hidden things the place had to offer.  Our table was beside this book tree which had my attention from the moment we sat down. 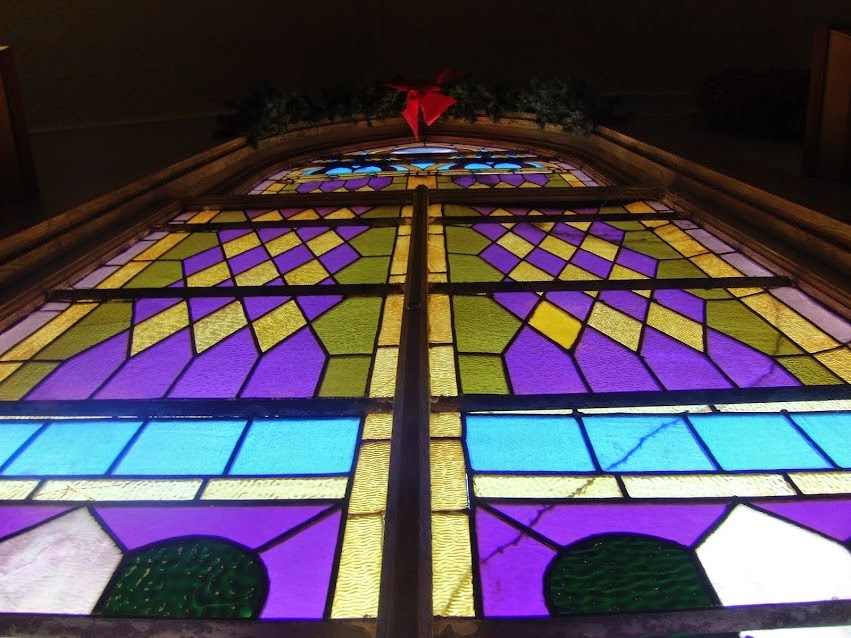 I also couldn't take my eyes off the stain glass windows which allowed most of the light into the room.  Time moved fast and it was time to start my drive home. 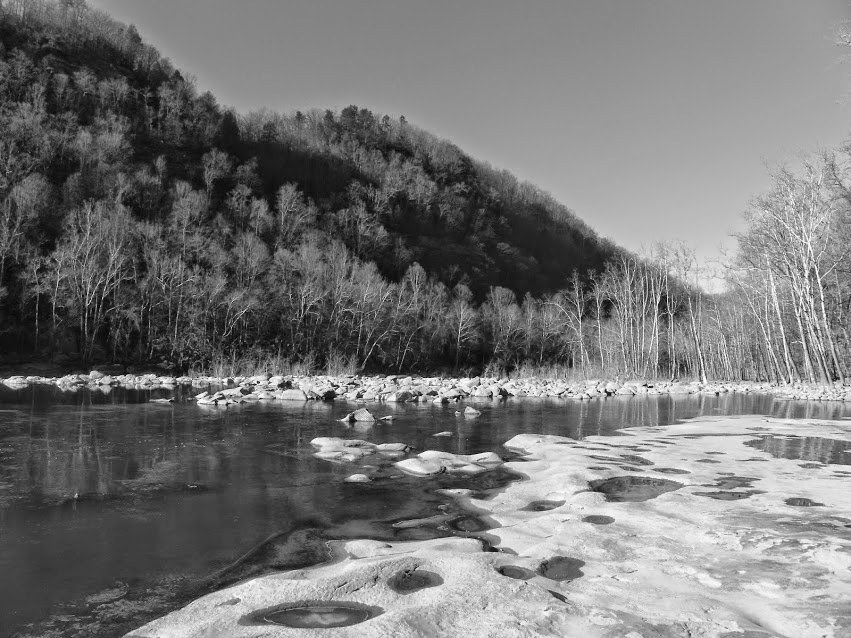 As I was cruising home, something off to the left grabbed my attention.  I saw a bunch of tiny little rocks that looked round from the road and I had to stop to take a closer look.  I discovered this cool place that must be hidden during the summer when the leaves are on the trees and blocking your view from the road.  There is this huge rock leading up to the water edge and tons of boulders laying in the water.  I'm kind of excited to revisit this place later in the summer and see how the fishing is.
Posted by Shannon at 10:33 AM