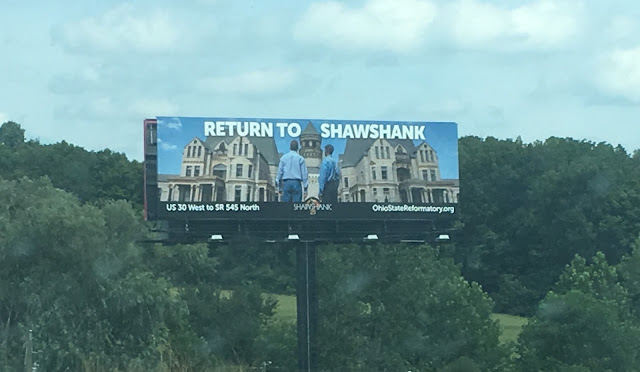 This past weekend, I got to complete one of my bucket list items.  To run in the Shawshank Hustle at the old Ohio State Reformatory.  I heard about this race several years ago and have wanted to run it but something always came up.  This year, the 5th run held, also marked the 25th Anniversary of the Shawshank Redemption Movie so it was the perfect time for me to give this run a try. 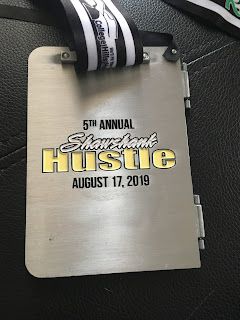 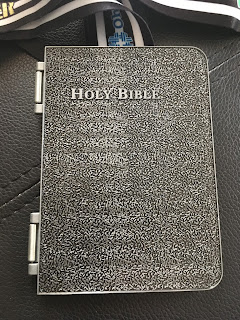 I bought my ticket early for around $50.  The ticket came with, t-shirt (inmate or guard), bib, commemorative custom socks, backpack and medal at the end. You also received a free ticket to tour the Ohio State Reformatory, where the movie Shawshank Redemption was filmed.  You also get a free ticket to ride the Richland Carrousel, which a lot of runners will do during the race.

If you are an out of stater, I would highly suggest you book your hotel early because the rooms fill up fast and by the time this event rolls around, all the rooms are sold out.  Another helpful hint is to pick up your packet the day before and do your tour that day, if possible.  With thousands of people there on race day, it is a mad house. 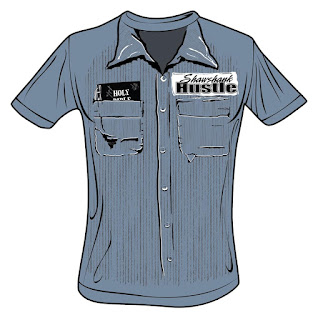 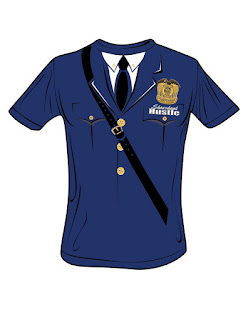 A month or so before the race, the organizers will post if you are an inmate or guard.  This will tell you which team you are on and which t-shirt you will get.  I found these shirts run small (for ladies) so you may want to up your size when ordering.  I normally wear a medium and ordered a large.  It is very form fitting so I will most likely get an extra large next time. 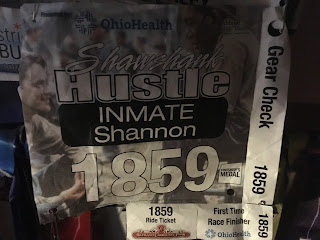 I picked up my packet the night before.  We were talking to one of the vendors which asked me if I was ready for the monster hills.  My eyes got big and I started to panic!  On the drive back to the hotel, I got to see what hill he was talking about and it kept me up thinking about it.  On race day, I was able to walk up them at a 17 minute pace but one is pretty steep.  This race, has two pretty big hills you must climb so be training for that so you are not surprised like I was.

This race will take you around the Shawshank Trail, which was created by Destination Mansfield in 2008, just for the fans of The Shawshank Redemption.  All along the trail, you will find sites where the movie was filmed. Along the way, if you want to take a break, you also have a free ticket to ride the Richland Carrousel.

Race morning, make sure you get there really early.  The race started at 7:30 am but the parking lots open around 4:30 am.  You have your choice of the paid parking ($10) or free parking.  We got there around 5:30 am and was able to park in the free parking pretty close to the event.  They had a lot of volunteers out with flashlights to guide you around the maze to the parking area.  I can't express this enough, GET THERE EARLY!  Traffic is pretty bad with thousands of people trying to get there, so save yourself some race day stress and just come early.

Once parked, there is a short walk to the Ohio State Reformatory.  There is plenty of bathrooms as well.  Lots of portajohns lining the right side of the Reformatory and a stall bathroom on the right.  The stall bathrooms only had three toilets and the doors do not shut, in case you wanted privacy.


There is a costume contest before the race, so think of something original to win!  I dressed as "Andy" but there was so many people dressed the same way, that I just didn't bother entering.


As you are lining up for the race, there is pacers holding signs with race speeds you can line up behind.  Faster runners up front and slower in the back.  There is a time limit on this race of 2 hours because they can't keep the road closed any longer then that.  We lined up with the 12 minute pacer but to tell you the truth, she was running at a faster pace then that.  In the start, we were running at a 11 minute pace and the 12 minute pacer was still pulling away.  I would suggest you keep at your own pace and not worry about the pacers.


Another big part of the race is trying to beat the Warden.  If the higher number of inmates or guards cross the finish line before the Warden, ten people from that group will win a pair of running shoes.  He took his time running, even stopping to take pictures, so don't worry about needing to be a fast runner. 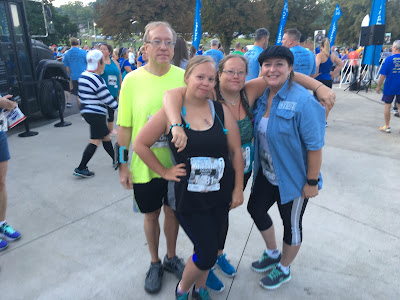 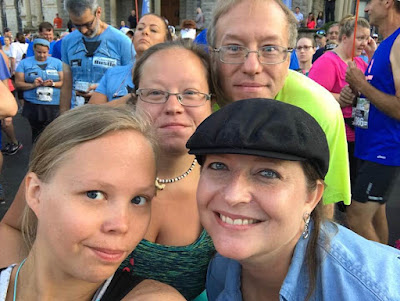 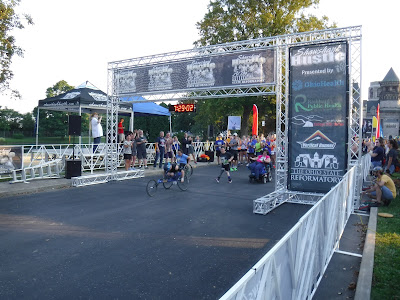 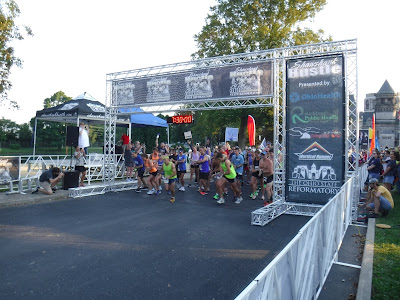 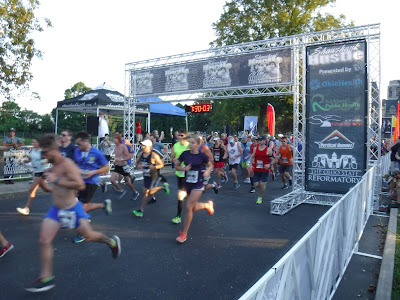 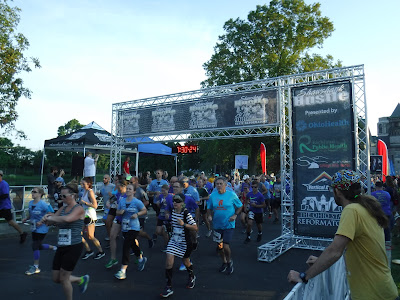 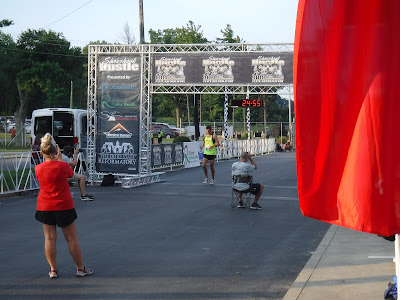 The start was smooth with a good 1.5 miles of downhill.  After that is the first really steep hill and the carrousel is right in the middle of this hill.  I can see why lots of runners stopped to rest.  We made it to the top and around the block to run back down the hill on our way back.  At the bottom of the hill it flatten outs and you are able to gain some speed again.  The last half mile is another hill, although not so steep.  Once you get to the top, it is a race to the finish line. 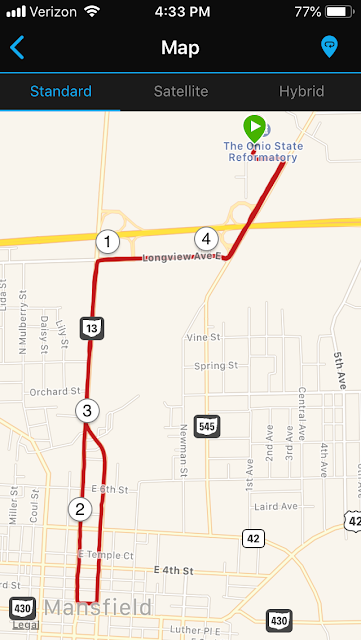 This race is very well organized.  They have water stations around every mile and plenty of water and food at the finish line. Music is playing all morning long getting you ready to run.  There is food vendors, shirt sales and even a place that will engrave your medal for you.

I'm not as fast as I used to be but with little to no training, I was able to complete this 4.60 miles in 1:07 minutes.  That is a combo of jogging/walking.  I'm really looking forward to try and do this one again next year! 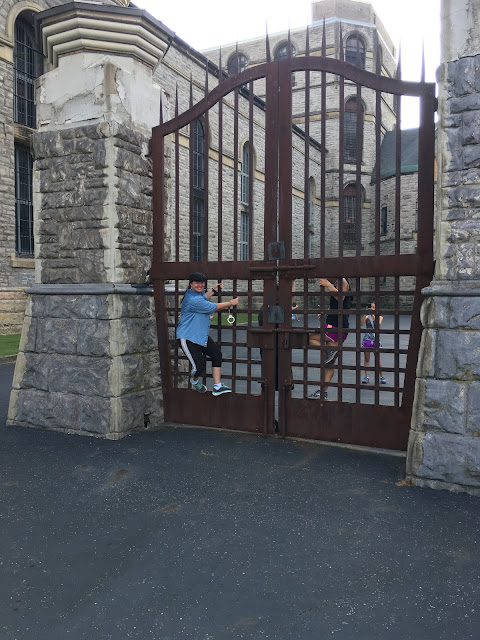 My blog on touring the Ohio State Reformatory.
Posted by Shannon at 6:46 AM